Since the first days of DayZ, there has been an interesting phenomenon of early access survival games. This rush of titles revolve around starting off with nothing, gathering supplies and pushing through a world designed to kill you at every step. However, because these games release in early access they are often buggy, unfinished and prone to abandonment or a slow trickle of updates. Conan Exiles is the newest such game to garner mass attention.

Developed and published by Funcom, Conan Exiles is a survival game set in a world based around the mythology of Conan the Barbarian. Players begin the game with literally nothing to their name except (maybe) a loincloth, crucified for crimes great and small. 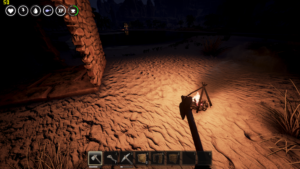 On the brink of death in the vast wilderness, you are rescued by none other than Conan himself, who promises you will meet again. From there the plot ends and you begin forging your own story, surviving, fighting and even thriving in this deadly world.

As Conan Exiles is in Early Access, this review is of the game as it stands right now. After major updates every couple of months, this review will be revisited and updated to better reflect the current state of the game.

Conan Exiles is incredibly faithful to the world and lore well-established in the Conan franchise. Different groups, such as Cimmerians, Stygians and Nordheimer can all be chosed as the basis for your character. In addition, you’ll meet members of each race in bandit camps, forts and other places throughout the world. Whether you wish to avoid them, conquer them or enslave them is entirely up to you.

Humans are the least of your concerns however. After leaving the desert, feral ghouls, armored creatures called Shalebacks and more stalk even the starting areas as you first find fresh water and trees. Making your way into the Northern regions, giant spiders and even more horrific monsters begin to appear, making any progress carry a sense of caution. Overall, the lore is well-represented, with an authentic high-fantasy feel to most areas in the game.

Due to the nature of this game, there isn’t really a plot to speak of. 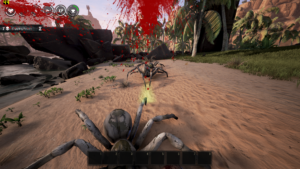 Instead, it’s all about the path you decide to take through the world presented to you. Want to become a raider, stealing resources from any camps you encounter? How about become a sickening cannibal, in service to one of the many eldritch gods? Or perhaps you have great aspirations of ruling everything you see, building fortresses and your own civilization. You can embark on any of the previously mentioned ventures or something else entirely.

The controls are fairly simple to grasp, with hotkeys for opening crafting menus. Currently, violence is the only solution to any problems you encounter in this vast world. You earn experience for practically anything, from killing an enemy to chopping down a tree. When you level up, you can improve your character’s stats, such as their health, strength and more.

You also unlock new skills, allowing you to build new types of gear, weapons and fortifications. While you start with nothing but your fists, you can craft stone weapons with basic fiber and rocks you find scattered around. Over time, you might even build a forge and more on to deadlier weaponry.

While combat is fairly simple, this is where one of the major problems in the game rears its head. The hitboxes, right now, are absolutely terrible. Practically anything can hit you from some meters away. However, that unfairness is not reciprocated. Oftentimes, I’d be standing right on top of an enemy, swinging away, and only half or so of my hits would properly register.

The enemy AI is fairly limited, patrolling a certain region, then relentlessly attacking you when you enter it. Groups of enemies show no real strategy apart from circling around so they can all hit you. 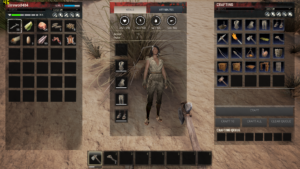 Admittedly, they also show remarkable pathfinding skills through treacherous terrain in order to reach you. However, even this isn’t perfect. Right now, no enemy can enter water, even alligators! Not only is this easy to exploit but it completely breaks immersion.

The last interesting feature is the ability to make thralls. If you knock out a human NPC. you can drag them back to a structure called the “Wheel of Pain” and break their will. After this process is complete, they become your slaves, or Thralls. These thralls can be assigned to different tasks both important and mundane. It’s an innovative feature and probably the biggest thing that sets Conan Exiles separate from similar games.

Conan Exiles is built in Unreal Engine 4; that said I have to be blunt, the graphics were a shockingly mixed bag. Most models look decent but even at max settings lack a very high level of quality. Except, however, for the humans, which are rendered well-above the other inhabitants of this world. The environment for the most part looks very good, although there is an odd shimmering effect for far-off objects, even at higher resolutions or levels of anti-aliasing.

Whenever you chop down trees or carve into rock, the strengths of the engine show. Rocks are smashed with realistic breakage and trees come crashing down as you’d expect in real life. The water looks great, especially with light rays breaking through during the height of the day.

The soundtrack is well-done, with sweeping orchestral pieces that immediately invoke a high-fantasy setting. 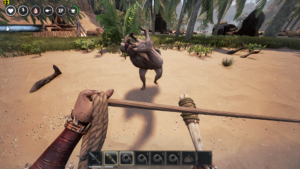 When wandering around during the day, the music shifts between several tracks, slowing down once night falls. None of the music is anything less than fitting.

However, I wish there was more variation for combat music. Whenever you engage in combat, which you will be doing on a regular basis, the exact same track immediately begins playing. While it’s not a bad piece, it’s far too repetitive.

Due to the different possibilities and options for making your mark on the world, the replay potential is near-infinite. The sheer possibility presented is honestly overwhelming. That said, I do feel if you play by yourself, you are seriously throttling your experience. Having friends to help you survive and build adds a huge amount of co-ordination options to when you are planning a base or a raid.