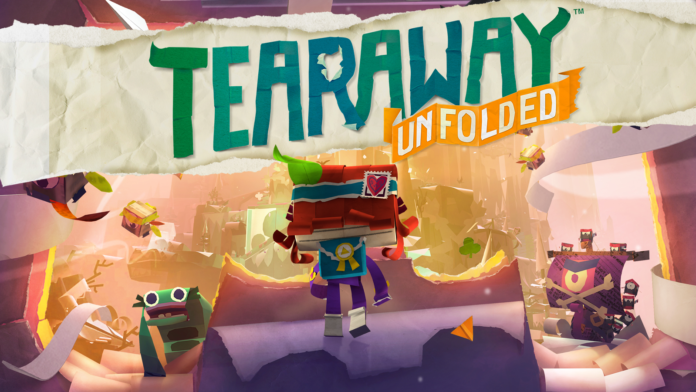 A post was made on the Official PlayStation blog today regarding the new games that will be available for free during the month of March 2017. Of course, you must be a subscriber to PlayStation Plus.

Disc Jam is a new arcade sports game being developed by former Call of Duty, Guitar Hero, and Tony Hawk developers. Relive the intense competitive action of an old coin-op classic, but in a modern package complete with online play and ranked leagues. Jump in with 2-4 players and compete 1v1 or 2v2 in a unique combination of air hockey and tennis. Every character is unique; find the one that matches your playstyle.

Tearaway Unfolded invites you on a journey to help your plucky messenger make a very important delivery.

Reach into your TV with your DUALSHOCK 4 wireless controller to unleash gusts of wind to unfold hidden areas, confound enemies and ride a paper plane. Use your new powers to catch objects thrown out of the TV screen and hurl them back into hard-to-reach places or at enemies, and guide your messenger through scary places by shining the light bar at the screen.

From the companies behind Guilty Gear and BlazBlue comes Under Night In-Birth Exe:Late, an all-new 2D fighting game for the PlayStation®3! UNIEL strikes the perfect balance between accessibility and depth, offering an experience that both fighting game veterans and those new to the genre can enjoy! Choose from 16 unique characters and join them in their perilous journey through the Hollow Night.

Under Night In-Birth Exe:Late offers a unique fighting game experience by harnessing the power of the ‘GRD’, a unique system that can help you turn the tide of battle. Attack aggressively and be rewarded with stronger attacks and a slew of abilities, giving yourself the edge in combat!

Eight years since the defeat of the alien invasion and the destruction of the Mothership, civilization recovered most of the prosperity it once had. In 2025 a new state of emergency arises as giant aliens and insects are discovered deep underground. The Ravagers have evolved, and are stronger than ever. The Earth Defense Force must now stand up to these terrifying creatures to save humanity once more!
The long awaited sequel that hardcore shooter fans demanded, Earth Defense Force®2025 is an action shooting bonanza that arms players to repel the most terrifying invasion of giant aliens the world has ever seen. Equip hundreds of weapons across four character classes and exterminate menacing creatures of all sizes to save the world!

Witness the rebirth of a genre in Lumo – a classic isometric adventure with a modern twist for gamers young and old alike!

As a contemporary take on the long-lost isometric platform genre, Lumo can be enjoyed by anyone looking for an absorbing, challenging and rewarding adventure. But for those who lived through the golden age of videogames – the 80s and early 90s – or know about the games and culture from that time, layer upon layer of nods, winks and touches to those times help build upon an experience that’s as heart-warming as it is exciting!

With over 400 rooms across four unique zones, six hidden mini-games and all kinds of secrets to uncover, Lumo is a true voyage of discovery. How much you discover just depends on how hard you look…

Take control of a one-armed warrior named Sasha, wielding a living sword on her journey through a nightmare world in search of her family. Swipe-based touch controls will let you solve puzzles, find secrets, and do battle with a host of disturbing monsters.As the journey goes on, you’ll unlock new abilities, ascend an RPG-style upgrade tree, and tease apart the mysteries of the dark fantasy universe Sasha finds herself in.

• Severing: Best enemies in combat for a chance at severing their body parts — then wear them to gain new powers or consume them to upgrade your equipment and abilities.

• Exploration: Follow branching routes through the unknown, using your wits to avoid hazards and solve puzzles.

This is going to be a very interesting month. We’ll finally see the potential of Disc Jam after its announcement from the last E3. Then, we have Tearaway, a first-party title that we don’t have any more excuses not to play. About Severed, well… if you have a Vita, it’s a must play game. I’ve personally played about half the game and it’s a unique experience not to be missed. I’m also very curious about Lumo, which I have never heard of before, however it looks promising.

There is definitely something for all kind of gamers, going from adventures and puzzles to fighting games and a shooter. Are you happy with this selection? Are you going to try these games out? Let us know in the comments and forums.