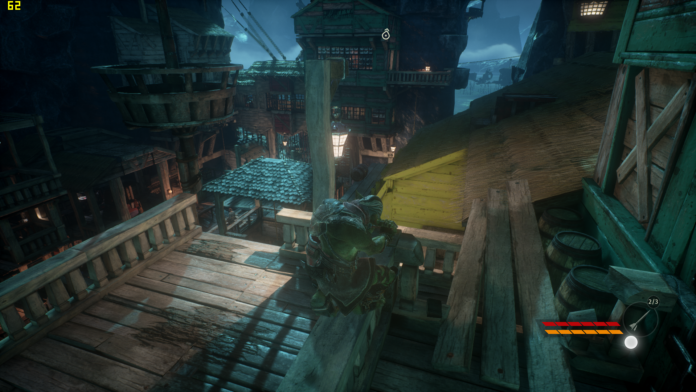 Developed by Cyanide Studios and published by Focus Home Interactive, Styx: Shards of Darkness is the sequel to the 2014 game Styx: Master of Shadows. Players once again take up the green mantle of the wisecracking goblin assassin Styx. This time around, while taking on some odd jobs to pay the bills (and acquire loot) Styx takes a contract to steal a scepter from a visiting ambassador. Simple enough, really. Unfortunately, things aren’t as easy as they appear, and Styx quickly finds himself in deadly plot between humans, elves, dwarves and all goblin-kind.

The world of Styx: Shards of Darkness is a very interesting one. Commonplace fantastical themes seem to be present, however upon close inspection you realize most are turned on their head. Goblins, also referred to as the Greenskins, are treated as a plague, scum beyond scum not fit to live in most cities. 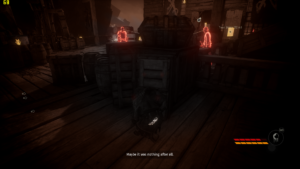 Even if some are thugs you’ll quickly understand that in reality, they are victims of systematic oppression at the hands of practically every faction.

That said, it isn’t really used to explore deeper themes, it’s just there as a unique backdrop. While a part of me would have liked to see things explored at a more philosophical level, it would have gone against the more satirical humor the game is built around. These tropes are presented and inverted to mock, not discuss.

Styx’ quest to recover the scepter and conveniently retire with his newfound wealth doesn’t quite go according to plan. Forced to work with humans, his job is initially taken from a purely professional perspective. However, when he infiltrates the Dark Elf city of Körangar, it becomes apparent there is far more at stake for his entire race.

If we are being perfectly honest however, the story never truly takes any monumental risks or shifts, preferring to comfily mock existing fantasy tropes. This isn’t necessarily a bad thing though, as it’s enjoyable to watch snobbish evildoers exasperated when their plans of dominion fall through.

Let’s get something perfectly straight here; Styx: Shards of Darkness is a stealth game. Not stealth/action, pure stealth. If you try to play this like Dishonored or Assassin’s Creed, you won’t enjoy it. Trying to engage in combat with more than one enemy will most likely kill you, as all Styx can do in an open fight is parry an opponent before striking himself. It’s fairly telling that out of the four difficulty options, combat is disabled on the highest two.

With that out of the way, the stealth options are numerous and well-implemented. You can craft items like bolts or acid vials using the resources you find scattered throughout missions. You collect the magic resource called Amber to power your abilities. 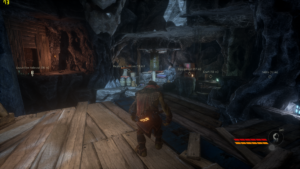 Styx can create clones of himself, which can perform simple tasks or be used as distractions. He can also turn invisible, sneaking right under a guard’s nose.

All of these options allow for an extreme variety of playstyles, such as getting through an entire level without choosing to kill anyone. Or, on the other hand, choosing to not let a single enemy remain alive. Brutal acid traps, rigged alarms, poisoned food, the trusty assassin’s blade, there are countless ways to dispose of your targets.

During each mission, you’ll earn points for exactly how well you did during a mission. The less enemies alerted or slain, the more tokens found, anti-Goblin posters torn down and the like, the more points you’ll get. Back at your hideout, you can use these points to upgrade Styx’ abilities, such as learning a new leaping assassination or the ability to craft new items.

It’s a rewarding progression system, however I did find one issue with it. A major part of your rating is how few enemies you kill. I could understand if there was actually some downside or reason to spare those you encounter but there just isn’t. The entire environment and storyline emphasize just how bad the goblins have it, so where is the encouragement for me to spare any of their accusers? It’s a minor gripe but a gripe nonetheless.

Without a shadow of a doubt, most of the characters in this realm are caricatures. The evil villain who magically slips under everyone’s noses. The determined, rough-and-tough female warrior. All of humanity seems to be made of bandits or racist guardsmen. Snobby elves whose presence alone is infuriating. However, there’s one character whose dialogue, interactions and voice acting stand out phenomenally. Styx.

Perhaps best described as a quasi-Goblin Deadpool, Styx is hilarious. His witty observations of tired tropes begin from the prologue and never stop. Jabs are thrown at plenty of other games, especially those revolving around fantasy or stealth. Whenever you die, Styx breaks the fourth wall to explain just how badly you suck in a variety of brief but hilarious tirades referencing Hamlet, The Terminator, achievements, pizza and more. Honestly, maybe it’s a tad immature but I’ve rarely laughed this frequently while playing a game.

Running on Unreal Engine 4, Styx: Shards of Darkness is a good looking game, with clean, detailed textures even on lower settings. Playing on PC, there are a variety of graphics settings to play around with. 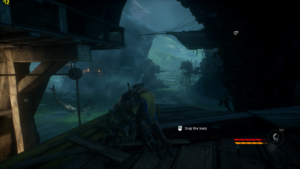 I was also impressed by how well optimized the game is. Admittedly I’m running it on a powerful rig, however the framerate almost never dipped, even with all the settings and special effects turned up during frenetic scenes.

Special attention is given to the environments. The entrance to the Dark Elf fortress is particularly impressive, with a lush waterfall and greenery encroaching on an impressive stronghold shaped into the rock of several cliffs. The slums and shanty towns are also very well done, with moonlight reflecting off different surfaces and creating an eerie ambience for the setting.

The character models also look decent, if not astounding. However, the lip sync falls utterly flat. Frankly it’s terrible, even for major conversations or during cutscenes. It’s a shame, though fortunately this is by far the only area of visual design I’d consider subpar.

The sounds here are simply incredible. When wandering through the taverns and seedy places in human settlements, the music matches the gaudy bawling you’d expect of that type establishment. Audio cues help you know if you’ve been spotted or an enemy has gone back to wandering. Combat is accompanied by frenetic music kicking up the action, usually emphasizing how quickly you are about to die.

Every environment has sounds fitting for it’s style. The waterfalls outside Körangar roar deafeningly, hiding any noise you make. However, this also makes you vulnerable to not hearing the chatter of your foes, striking a careful balance. Almost anything you bump into could make enough noise to attract attention, so being careful of where you step is critical.

Please read below for my summary and final score.