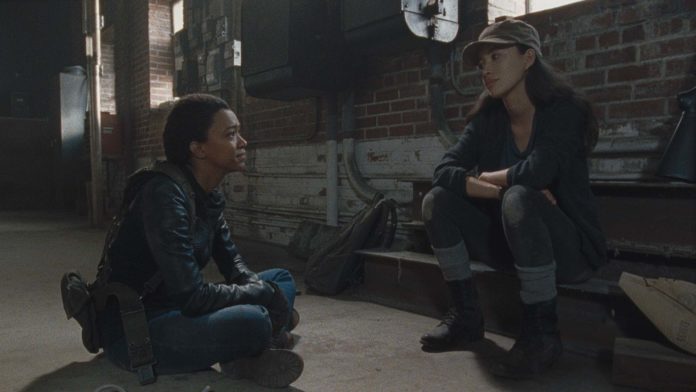 Before we talk about The Other Side, let me address something. I’ve seen a lot of negativity towards this season of The Walking Dead. I have seen a lot of complaints about “nothing happening”, which we know isn’t true. The dynamic of this season has been different, sure. Negan and The Saviors create a strange relationship that Rick and his bunch haven’t yet to encounter. Being subversive to someone.

They’re used to ruling the roost and after seeing them take over Alexandria in season 6, you’d be forgiven for thinking that that wouldn’t happen again. So yes, it hasn’t been full on, and why should it be. Some of the best episodes of this show have very little moments of action. I found myself defending the show quite often this season, explaining that if you have an episode like the opener to season seven then there would be no one left.

However, I did feel that The Other Side was tedious at points. The episode begins by returning to Hilltop. Re-establishing where we are at, as the way this season has been directed, we are often left quite a long time without much of an update. Hilltop is preparing for a fight. We see residents smelting pitchforks, for example. Maggie is leading Hilltop in their efforts and there’s lot of smiling and embraces. Meanwhile, Sacha is getting ready for her own fight. While tending to a grave, Rosita arrives and we see the interchange that took place at the end of an episode a few weeks ago. Rosita telling Sacha that she is going to kill Negan and she needs Sacha’s help. 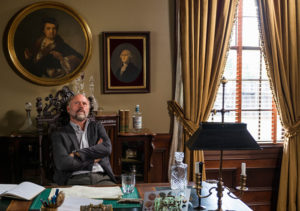 Before long The Saviors are bearing down on Hilltop. Sacha and Rosita escape to a hidden tunnel that was put in to help Maggie get out when they came calling. Meanwhile, Maggie, trying to reconcile with Daryl (who’s now at Hilltop by the way), are caught out. Too far from the tunnel, they make a break for underground store, where food and the like is kept. They tell Enid to keep The Saviors away. Simon, the go to guy of the Hilltop Saviors, comes to speak with Gregory. Turns out, after Negan’s fiery encounter with their doctor a couple of weeks ago, The Saviors need a new medic. It would seem that Dr. Carson is the lucky candidate for new doctor of Negan and The Saviors.

Gregory meekly tries to dissuade Simon from taking the much-needed doctor. Professing that they need medical support. Simon is quick to remind Gregory that he has little say in this, despite Gregory intimating that this may cause a rebellion. Simon encourages Gregory to be sure to let him know if he gets word of a mutiny. Speaking of mutinies. Whilst this exchange is happening, Daryl and Maggie are still hiding in the food store. Enid tries to distract an approaching Savior but is unsuccessful. The goon head down to the basement and starts looking around. Daryl has his knife ready to go and as the Savior makes to leave, so do does Daryl to kill him. Maggie holds him back and The Savior leaves without incident.

What follows is a small but significant reconciliation between Daryl and Maggie. Daryl seemingly avoiding Maggie as he blames himself for Glenn’s death. Maggie tells him that this isn’t the case (though technically speaking it kind of was) and they hug it out. The Saviors leave without incident and take their newly appointed Dr. Carson with them. Leaving Hilltop without a doctor and no one to check up on Maggie’s baby. After they leave, Daryl asks where Rosita and Sacha are. In a brief encounter between Jesus and Gregory, we see an interesting character change in Gregory. He seems bolshy and threatens Jesus, dismissing it as sarcasm. Following his discussion with Simon, perhaps Gregory is feeling protected by The Saviors. If history has taught me anything, this won’t go as he hopes. 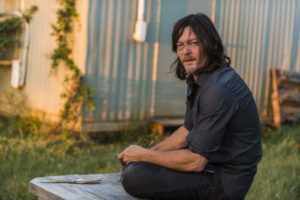 The rest of the episode is focused on Sacha and Rosita’s quest to stop Negan. There’s an interesting dynamic that needed to be addressed here. Both were with Abraham at one point (and there was some notable crossover), so there has been a tension between them. Given that Abraham fell at the hands of Negan this tenuous partnership formed. Making their way to Sanctuary (The Saviors compound) there’s still some tension. Despite that, they work well together and efficiently and are able to acquire a car and get to The Savior’s home without any drama. With no drama at all. For me this almost feels too easy.

It cuts back to them later in the episode and they’ve found the abandoned building that they recall from Jesus’ map. Sacha is surveying Salvation with her rifle and everything is hunky dory. First off, something that seems close enough to overlook The Saviors compound but without any sort of patrol seems at odds with what we know about The Saviors. While they are carrying out their unopposed reconnaissance, they spot Eugene (who is also definitely Negan), doing his security duties. At one point, Negan emerges to greet the returning Saviors from Hilltop with their new doctor in tow. Sacha tries to line up a shot but is unsuccessful in getting a clear shot.

They decide that they need to go into the compound. Waiting for the cover of night, they make it to the fence into the compound. Not before taking out a guard who is accompanying Eugene, who is doing some late night inspections. They pry the fence open and beckon a terrified Eugene to come with them. If you had any doubt as to whether Eugene was enacting some brilliant plan by “becoming Negan” wonder no more. Eugene tells Sacha and Rosita to go away, he did not ask for them to come and does not want to be rescued. Of course, he could be playing the long game, knowing the consequences it could mean if he was to return to Alexandria, but he just seems scared. 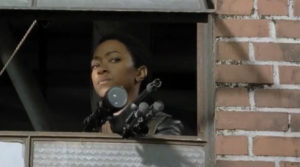 Eugene retreats back into Salvation. Resigning to the fact that they’re going in, Sacha asks Rosita to cover her as she opens up the fence to get them in. When Rosita turns around she sees Sacha locking up the fence. Sacha, smiling, tells Rosita that “it isn’t your time”. This refers to a conversation they had earlier about it not being Abraham’s time. She then runs towards the emerging guards, shooting them and heading inside. Rosita makes her escape and gets a safe distance away. As she gathers her breath she is faced with a shadowy figure with a crossbow. We presume it’s Daryl, however, if it was, why not just show Daryl? Could it be someone else?

I found myself a little disinterested with this episode, there were perhaps to many moments of just sitting in two talking. Of course, there’s nothing wrong with this and it was great to see the resolution between Daryl and Maggie and Sacha and Rosita. I’m not sure what could change to improve it, given how everything is building to bringing it all together shortly. It was watchable but I didn’t find myself as captivated as I have been previously.