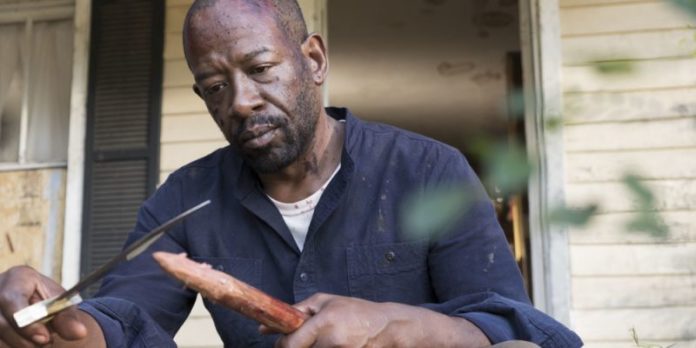 We return to the Kingdom for this week’s episode of The Walking Dead. “Bury Me Here”  finally sees King Ezekiel and the Kingdommers come to the resolution that they must fight Negan and The Saviors. Though not without some drama beforehand. There is also some interesting character development with Morgan and Carol, Morgan more so.

The episode starts seeing members of The Kingdom loading a lorry. Loading the lorry with a single cantaloupe. A single cantaloupe? Things must be really bad at The Kingdom? The episode begins by establishing the status of The Kingdom as it stands. Carol is struggling, we get the impression that she does not fully believe what Daryl has told her about her friends at Alexandria. She makes her way from her cottage into the Kingdom to speak with Morgan. Morgan, meanwhile is teaching Benjamin’s brother how to fight/defend himself with a stick.

Carol speaks with Morgan and tries to clarify what Daryl has told her. Morgan however suggests that it is for her and Daryl to discuss and offers to go with her to Alexandria, right now if she wants. Carol returns to her cabin and encounters Benjamin, eager to learn to be a better fighter, asks Carol for help. Carol tells him to stick to his post and declines his request. Returning to Morgan, there’s some bonding between him and Benjamin. Morgan trying to teach him that killing is not necessary; “when you hurt others, you hurt yourself.”

The main drama in this episode revolves around the drops that The Kingdom have to make. A group of Kingdommers make their way out to a drop, delivering a dozen cantaloupes for The Saviors. On the way they encounter a blockage in the road; a row of trolleys obstructing the way. Disembarking and exploring, the group find a freshly dug open grave with a sign that reads “Bury Me Here”. Expressing concern for the way this world now affects people’s sanity, the group continue on their way to make a drop. Earlier in the episode we see Richard skulking around the same area and digging, presumably the grave. 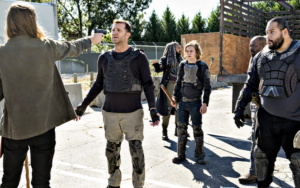 Every time there is a scene with a drop or The Saviors, the tension tends to escalate quite substantially. Bury Me Here is no different. At the drop, Gavin, the leader of the group of Saviors inspects the ‘offering’ and sees that they are one cantaloupe short. Ezekiel, flabbergasted as to why there is one missing, offers to double the donation within an hour. Gavin is not happy with this and explains that The Kingdom need to learn a lesson. Anticipating a reaction, The Saviors claim all of the Kingdommers firearms. He then orders someone be shot. Jared, takes aim at Richard who goads him to do it.. At the last second Jared switches aim and shoots Benjamin, twice.

Panic ensues and the Kingdommers rush back to Carol’s, Morgan declaring that she is well stocked with medical supplies. Unfortunately, despite their efforts, they are not able to help and Benjamin dies. Morgan storms out and starts to experience flashbacks of his wife and kids and sitting in the grave that read “Bury Me Here” almost kills himself. He briefly acts like he did before he became more ‘zen’ via aikido. In his rage he kicks over a tub revealing the missing cantaloupe. Realising it must have been Richard by the way he acted at the roadblock, he confronts him.

Richard admits that he was responsible. He tells Morgan that he had planned to get himself killed, as a means to send a message to Ezekiel. The grave being for him. That The Kingdom needs to fight with Alexandria and Hilltop against Negan and The Saviors. Richard threatens Morgan with the fact that the day is coming that Morgan will have to kill. Little do we know that that day is today! 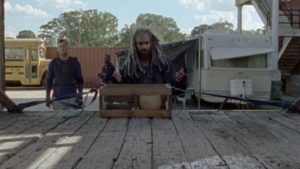 Returning to the drop point to bring the missing cantaloupe, Richard moves to give the cantaloupe the Saviors. Intending to continue with his plan to lull the Saviors into a false sense of security, that “they get it“. Morgan, having picked up his aikido stick just before the Saviors arrive, attacks Richard and strangles him, until he dies. Morgan explains to everyone that Richard was orchestrating a plan to force a war.

Returning to the kingdom on foot, burying Richard on the way, Morgan finally arrives at Carol’s. He explains to her what really happened to the group at Alexandria, including the information that Glenn and Abraham were dead. Morgan attests that he is now going to seek out every single Savior and kill them, abandoning his previous mantra of not killing anyone. Carol pleads with him to stay at the cottage. She heads back the Kingdom and, confronting Ezekiel, affirms that they need to fight.

Replanting his ‘royal garden’ with Benjamin’s little brother, it appears apparent that this is a reality. The garden having been damaged by weevils, they may now struggle to meet the offerings that the Saviors expect. Ezekiel agrees with Carol that they must fight, “but not today”.

The final scenes see Morgan sat in Carol’s cabin. He is sharpening his stick to a point. I felt that this final scene was probably the best, and most important scene of the episode. Not only do we see Morgan reach his breaking point and now settle on the fact that he must kill, but we see a change in him. It is only subtle, but it seems that Morgan is quite close to his hyper-vigilant paranoid state of mind we saw him in a while back, before aikido. Is he awaiting the Saviors? He did call out at the drop that they must go to Carol’s as she is loaded with medical supplies. If any of The Saviors heard that, they will know that there’s someone who is well stocked and perhaps it will need addressing.

For me, this episode needed to happen and it was certainly interesting how they handled Morgan’s character. It was interesting to see him lose his pacifism, something he has managed to hold onto for a very long time. On top of that, it was important that The Kingdom, finally, reached the point that they were willing to fight. Plus, yay for Carol being on board to fight.

There are only three episodes left of the season and I am starting to get the impression that we will get stuck with a cliffhanger. The opening to season 8 being the ‘epic battle’ most of this season has been gearing up towards. We will see though.