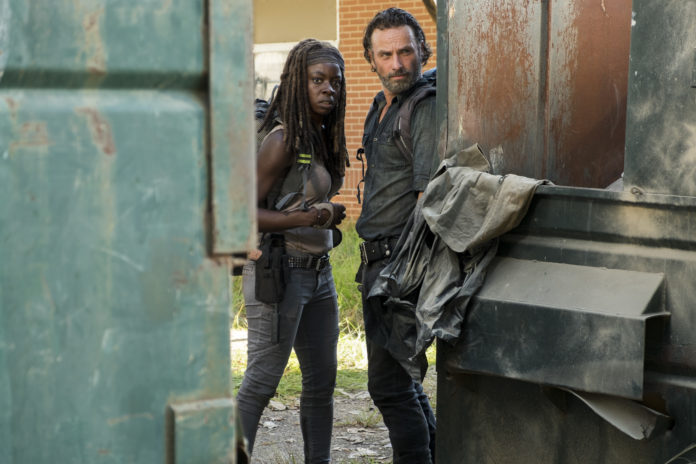 Say Yes is a great change of pace for The Walking Dead. Although it manages to bring in some tension and some emotional scenes, it is also much more light-hearted. Most of this week’s episode focuses around the interplay between Rick and Michonne. Though we do see some development of Rosita and Tara’s respective current predicaments.

Starting the episode on the road, we see Rick and Michonne scavenging for supplies. Not just for The Saviors though, they are searching for guns, lots of guns. If they want to enlist Jadis and the Junkers help in fighting Negan they must complete this task. We learn that they have both been out on the road for a few days and they need to head back soon. We are also reminded that they are both an item and that is seemingly going strong.

The opening to the episode I found quite jarring, it was lovely and relatively happy. Nothing wrong with that of course, but it felt at odds to the situation that they are currently in. Of course, the good mood is probably because they are away from The Saviors and they are working to liberate themselves. Definitely a positive motivator in my eyes. Plus, Rick and Michonne get some alone time together.

The search is going ok, nothing spectacular and no substantial arms caches have magically appeared as yet. Whilst on the road, Rick is sleeping and Michonne is making a hot drink, when she spots something. By the edge of the road, she spots a deer. Moving to the van to get her weapon, she wakes Rick and they both move to where the deer was. Unfortunately, the deer has run off, at this point, Rick reminds Michonne that he owes her deer. Having lost one near the gates to Alexandria previously. Just before they are about to head back, they notice something in the distance.

On further exploration they discover a Walker with an assault rifle strapped to its back. Intrigued by the potential they venture onto the roof of the nearby building to scope out what is around. Ahead of them is a fun fair, laden with Walkers, many of which have guns on their backs, in army attire. Before they can move off the roof, it gives way and Rick and Michonne fall through. This came across in quite a comedic way and it feels that this is what the director was going for. Rick and Michonne are soon heard to be laughing at what has just transpired. Again I refer to the change of pace, I was expecting the room below to be full of Walkers and there be some very dramatic scenes that follow.

This was not the case and they both discover a hoard of ready to eat meals and supplies. Taking time to rest and fill their stomachs, they have a candle lit dinner. They spend the night in the building they fell into and plan their next moves. Here we see some discussions about what might come after Negan, after The Saviors, what happens next?

Rick seems reluctant to lead the communities in the proposed situation where they have taken out The Saviors. Michonne is confident that Rick would be perfect for the job, but it’s not what he wants. He wants both of them to “re-order things together”, if Michonne wants to. It almost felt like some sort of proposal from Rick. Michonne said yes either way. Shortly after when Michonne is sleeping, we see Rick sat on the edge of his bed, with his head in his heads. Looking troubled. 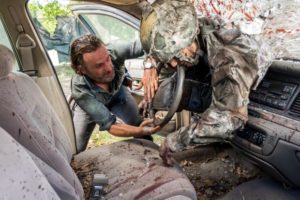 The next day, they work to clear out the Walkers so that they can seize the guns for Jadis. They formulate a plan of how to move forward, clearing out the nearby Walkers and plugging a hole in a fence with a nearby car. They split up and move forward. Michonne distracting whilst Rick moves the car forward. Of course, no plan ever goes to plan, especially not in The Walking Dead. Say Yes is no different. Arriving at the car, Rick finds a Walker face first in the windscreen. He tries to pull away the walker, eventually succeeding, but not before a slightly comical sequence where the Walker falls to pieces in his hands. They both end up surrounded as the car’s brakes do not work and they overshoot where they wanted to it be.

Moving through the fun fair, with sizeable Walker herd in tow, they split up to separate the Walkers. Chipping away at the Walkers, Rick notices something to his left. Scaling the ferris wheel he is nearby he sees a deer nearby. He pulls his gun to take it down but notices that a group of Walkers are making their way towards it. Resigned to the fact that the deer is lost, Rick looks to move back to his primary task. At this point, the ferris wheel buckles and Rick falls right in front of the Walkers heading toward the deer. Seeing this from across the fun fair, Michonne runs towards Rick’s location. Quick mention here on how poor the effects were in generating the deer, poorly done.

When she gets there she sees the Walkers chowing down on something. We of course realise that his is, hopefully, the deer that Rick had seen. Michonne does not know this and believes Rick to have met his end. Seemingly broken and shook to her core, she drops her sword. I got the impression here that she has given up, she doesn’t move to run, or take out the Walkers. Not even when they turn towards her. She just looks at a loss. Thankfully, Rick appears from inside a container and works to take out the Walkers. He tosses Michonne her sword and she immediately back, invigorated that her Rick is still here.

They finish off the Walkers and collect the guns. While driving to the Jadis and the Junkers, Michonne looks upsets. When Rick talks to her she feels that she cannot lose Rick. Rick explains to her that what’s coming next is likely to result in people dying, maybe him, maybe her. He explains that it’ll be worth it either way. He explains that he isn’t sleeping. Haunted by the loss of his friends, especially Glenn. Glenn kept him alive at the beginning and he wasn’t able to do the same.

Arriving to meet Jadis and the Scavengers to give them the guns, Jadis declares that the 63 guns they have found is not enough. They need double this amount before they will fight against The Saviors. Rick agrees to go out and find more guns. Of course we know where there are more guns and people too. Oceanside. 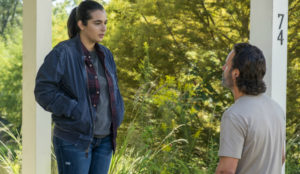 Tara know the location of Oceanside and the fact that they have weapons and people to fight. She also knows that they are not a fan of The Saviors, given they took out all the males in the community. However, she is aware that Oceanside do not welcome outsiders and Tara only got out of there by the skin of her teeth. Furthermore, she promised she would not reveal the location of Oceanside. This is something we see Tara struggling with in Say Yes, sounding off to an oblivious Judith at one point. She makes a decision and approaches Rick at the end of the episode and informs him she has something to tell him. Rick having found Tara before she could, as he is wondering if she knows where Rosita is.

I find myself getting frustrated with Rosita. Despite what her actions led to, she is still defiant and wants to take out Negan, regardless of the consequences to her, or anyone else it seems. In Say Yes, we briefly see her going out to find guns. Not to much success, I did find it funny when she takes out a Walker who is in the way of a gun on the floor, only for that gun to end up being a plastic toy one. With her frustrations she spends a bit of time sounding off at Father Gabriel, blaming him for making her wait to take on Negan.

Any points Father Gabriel makes seem to fall on deaf ears, as do the counsel of Tara near the beginning of the episode. It felt like Rosita is almost the embodiment of the impatient fans. Those who want Rick and the Alexandrians to just take on Negan, as unrealistic as that might be. But she does sound off and convey that what the strategy Rick is using might take a long time and there needs to be action.

When Rick cannot find Rosita, we cut to her approaching Sasha at Hilltop. She is seen sat tending Glenn and Abraham’s graves. Rosita brings Sasha a rifle and asks her for her help to take out Negan. Rosita explains that she knows every detail that Daryl and Carl have spoken of. Likewise, Sasha knows how to make it to The Saviors compound with the map Jesus has drawn for her. She reminds Rosita of the distance and how heavily guarded it will be. They both come to an acceptance that this may well be a one way trip. 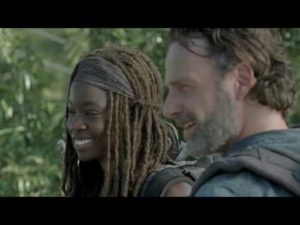 I get the feeling that Rosita and Sasha are going to scupper Rick’s rebellion in some way. At the moment, they are successfully making progress and The Saviors have no idea. If this plot behind Rick’s back draws focus on Alexandria, or the other communities, The Saviors could easily tighten their observations. What if they started to inhabit Hilltop and Alexandria? Could this ruins the agreement with the Kingdom? What would that mean for Maggie (The Saviors think she is dead)?

I feel that Say Yes was another strong episode for The Walking Dead. It changed up the pace a little and sees some quick progression in developing the rebellion. Though Rosita is surely going to be the proverbial fly in the ointment and/or get her (and Sasha) killed. It was nice to hear some laughs and see some more smiles. This second half of season 7 has had a lot more smiles and that makes me hopeful. We know it isn’t going to easily sailing and so do they. Doesn’t mean they can’t enjoy the ride. It feels like the pieces are starting to come together.

With only four episodes left of this season, it won’t be long.