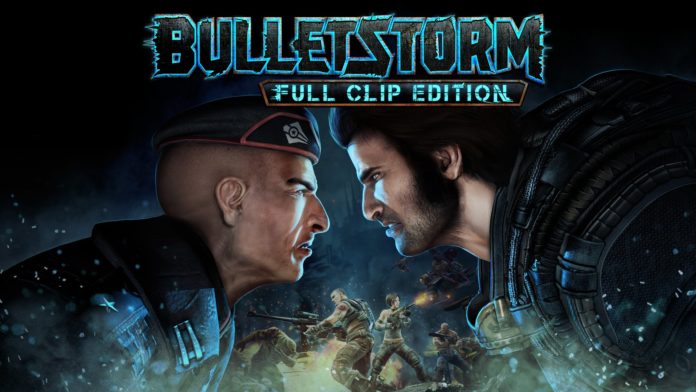 Bulletstorm is a game that easily well known for a few different things from its initial release. The game was chock full of infantile humor that relies on cursing like a sailor and lots or dick-humor. It’s known for its innovative combat which throws around gore and dismemberment like beads at Mardi Gras. A final, less illustrious thing the game is known for is the massive issues it faced with piracy on its initial PC release. Either way, the game is quite fun and showed a lot of potential, but it faded into obscurity quickly. That is, until the release of Bulletstorm: Full Clip Edition.

I’m happy to announce that Bulletstorm: Full Clip Edition is still very much the same zany and over-the-top game that it was six years ago. That’s a great thing for those that didn’t get to experience the original game, but at the same time a bit of a bummer for those of us that enjoyed the original game. Now, there still is one extra cherry on top for us Bulletstorm veterans, but I’ll get to that in a bit. Overall though, this is basically a HD rehash that should have been a chance to get into the game at a cheap price. Unfortunately, cheap doesn’t apply here.

Yeah, this one is a full-priced release.

Okay, so you play as Grayson, the foul-mouthed mercenary with a heart of gold, as he ends up in the cesspool of Stygia. Due to events at the beginning of the game he’s forced to turn his close confidant into a cyborg and earn the ire of war-mongering general. He also gets a fun little tool called the energy leash, which allows Grayson to dispatch his enemies with style and more flair than the Nature Boy himself. That energy leash allows you to create all sorts of hell in combat and kick enemies into hazards or cause them the most imaginably painful deaths possible.

All of this is exactly the same from the initial game, however the pre-order (or $5 add-on) DLC slightly changes this by adding Duke Nukem into Bulletstorm: Full Clip Edition. Before you get too excited about seeing Duke interact with the zany cast of characters in Bulletstorm, I should probably tell you Duke is the only actual change within the game. Everyone still speaks with Grayson and Duke seems to be self-aware of his situation, as he completely replaces Grayson in the story. Admittedly, I haven’t gotten all that far with Duke, as the DLC showed up a little bit after I received the game.

To summarize gameplay, the game still plays well but feels a little outdated. It’s not glaring, but at six years old, there are aspects to Bulletstorm: Full Clip Edition that feels that age. Biggest issue here is that the game seems to chug in large fights, it could be my own memory but I don’t recall this an issue in the past.

Bulletstorm came out near the end of the Xbox 360 life. Not the prettiest game, it leaned heavily on its arcade-style action than on the graphical polish. Fortunately, Bulletstorm: Full Clip Edition does a lot of work on the graphical aspects of the game. Normally, these types of remasters are marginal at best but Bulletstorm: Full Clip Edition is more than just a fresh coat of paint. If you knew nothing of Bulletstorm, I could sit you in front of the game and you’d believe me if I told you it was a brand new game.

While I really liked the fresh look of the game, I kept encountering performance issues that really bothered me. For a game where being quick and utilizing finesse is important, that game had some issues keeping up with low framerates and occasional pop-in issues. The issue is that Bulletstorm runs so smoothly at time that when it suffers from performance issues.

While Bulletstorm visually is a bit of give and take, the aural experience of the game is top notch. Dialogue is crisp and clear so that you can hear every dick-joke and quip about Duke’s issues with mistaken identity. Sound effects and enemy voices help make the carnage of the game seem even more extreme. Guns sound great and the extra effects really drive home some of the more wacky items in the armory. Finally, the soundtrack is pretty damn good. It’s not iconic but it fits most firefights like a glove.

Here’s the thing about Bulletstorm: Full Clip Edition. If it was $29.99 or less, I’d be yelling from the top of the world and telling everyone to pick this one up. Unfortunately, it is a full price game and if you haven’t pre-ordered it yet, your going to have to drop an extra $5 on Duke Nukem, which really isn’t worth it.

Now, the game does still deliver a great experience and it wouldn’t be fair to try to take those merits away from it. With that, there are some massive issues with performance that weren’t around the first time and they will muddy the beautiful experience that Bulletstorm: Full Clip Edition delivers.

If you haven’t played Bulletstorm yet, I’d advise you to check out Full Clip Edition. If you have already played the heck out of the original, I would tell you to probably expect this one to show up on Games With Gold or PS+ within the next few months.