In the opening moments, as beautiful panels flashed before me, Rain World invoked sympathy. How could it not? A young Slugcat, separated from its family, alone and defenseless as opposed to one of the deadly, massive lizards roaming the muck, or the soaring screeching raptors stalking the industrial overpasses. Just a small, scared Slugcat. That’s your character in this grim world.

Rain World takes a backseat approach to storytelling, not shouting exposition at you. Indeed, there’s not even a whisper, as no explicit dialogue explaining anything ever takes place. Instead, the game allows you to forge your own path, discovering this world, in all its beauty, horror, chaos and wonder, at your own pace. 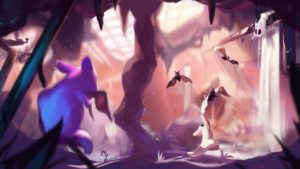 Taking control of this Slugcat, there’s a protective instinct that sets in immediately. As you explore the lower levels of the game’s mind-blowing 1600 locations, you see the underbelly of an advanced, industrial society. However, very little of it is truly understood. While there are at least a few twists that are fairly well spelled out, to explain them would be spoiling the later sections of the game.

Throughout Rain World, it quickly becomes apparent that the many enemies and creatures you’ll discover are not simply obstacles to overcome. They’re part of a living, breathing world. Different species have different behaviors and item/creature spawns are totally random. At one point, after injuring a lizard-like monster, I escaped it and continued on throughout the main path. Whilst hunting for food nearly a half-hour later, I stumbled on the same lizard, which still had a sharp stick (that I’d thrown at it) impaled in its shoulder. Immediately, it charged and chased me instead of trying to stalk me like its brethren. This was just one of many emergent sections that made it clear how well put together this ecosystem really was.

Rain World is a 2D platformer with quite a few genre staples implemented in a very ‘back to basics’ approach. Most of the gameplay is based around jumping and grabbing on to different outcroppings or ledges. You also have the option of picking up or interacting with various objects in the environment. 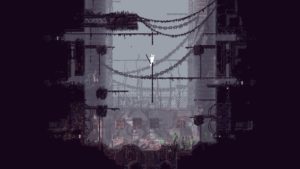 Using this, you can catch and eat food, which is necessary in order to hibernate and survive the regular downpours. You’ll also be able to pick up sticks and rocks to try and ward off the many larger, deadlier beasts in this world. The key word being ‘try’, of course, as it takes a ludicrous amount of punishment to even scare off most creatures. Unless you absolutely have to fight something, it’s far better to wait and let the creatures attack each other or try to sneak around them altogether.

Unlike the beasts, there’s no evading the rain. If you’re caught outside when the deluge begins, you’re dead. If you hibernate but haven’t eaten enough, you’re dead. On top of that, Rain World uses a karma system; whenever you hibernate with enough food, you level up in karma in addition to getting a checkpoint. In order to access new areas and continue the main path, you need to have reached a certain level of karma. 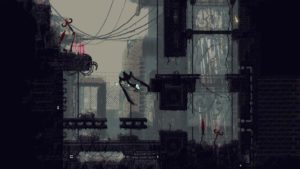 This is a great idea in theory however, you also lose one point of karma whenever you die. In case it isn’t obvious thus far, you’re going to die A LOT. In some ways, this is an appreciable throwback to much older gaming days, when saves were rare or nonexistent. That said, given how easy it is to die, you can legitimately lose four hours progress in the span of four minutes. Personally, I was able to get through and move past this but I imagine many gamers will take grievance to it.

One final point worth mentioning is that due to the vast amount of locations, there is a helpful creature that prevents you from getting lost. He’ll always point you the to the right place on the main path, stopping to point out food sources along the way. It’s an appreciate gesture and frankly a near necessity given the size of the game.

In every environment and new area, the retro art style is used to absolute brilliance. It’s a clean resolution with a presentation designed as a throwback. 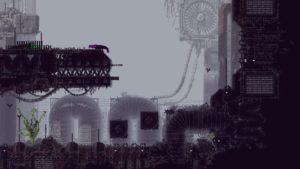 It’s not all spacious sewers either, as finding new areas unveils eerie swamps, heavy machinery, open skies and more. Despite the vast areas, everything felt new and fresh due to the constant change in scenery. These changes always showed off the art in unique ways, both settling and unsettling.

The framerate stayed steady the entire game, though there were some very occasional drops when lots of creatures were onscreen at once.

Bizarre and discordant one moment, upbeat and thrilling the next, the soundtrack used here is interesting on a variety of levels. Quite literally too, as the music often shifts tempo from one floor or area to another. There’s often a low, electronic beat that gives way to subtler tones when you’re in potential peril from one of the many dangerous denizens in the ecosystem. It helps the various sections have not only a different tone but a variable mood and it works fairly well.

Given just how much variation is present in enemy encounters and item placement, on top of the dynamic nature in the AI and ecosystem, I personally found the replay value to be nearly infinite. However, I have to emphasize that it’s definitely, again, dependent on your ability to weather the possible frustrations that arise from the randomized nature of everything.

Please see below for my review summary and final score for Rain World.