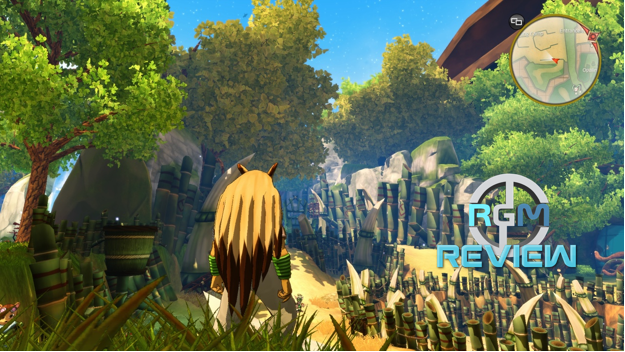 When you first dive into Shiness: the Lightning Kingdom, it feels very much like you’re taking control of the first episode of an anime. The art style is visually-striking, the character movements and vocal delivery are exaggerated, and the character design isn’t the most typical for an action RPG. Add that in with strongly strategic combat and a fun cast of characters, then you begin to see Shiness‘s major strengths. Although the story takes some time to get going, you’re properly rewarded with a consistently enjoyable adventure.

The story focuses on Chado, a young Waki who, along with his brother Poky, find themselves in the middle of a budding multi-regional conflict. With the help of a magical spirit called the Shiness, Chado travels across the many islands within the kingdom for some conflict resolution. As you progress, Chado meets up with some new companions that join your party (max party size is 5). When you first land in hostile territory during the intro, the game does take some time to get going. However, once you find your brother and start recruiting some new fighters, things start to pick up. I found myself more and more curious about what this world had to offer, especially with the impressive scenery and design. 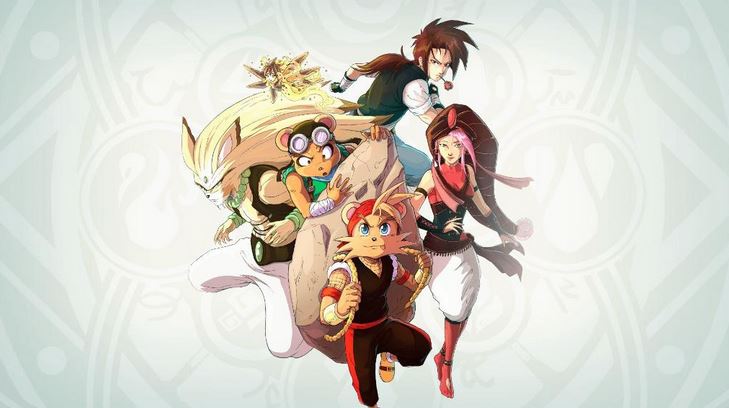 The story serves as a vehicle to take you across varying landscapes that offer something unique from one another. The story unfolds through cutscenes (some voiced, some not) and conversations with NPCs. Although voiced cutscenes also deal with frame rate drops at times, they’re cinematic and serve their purpose. The conversation system has an interesting system of having different dialogue options in every somewhat prominent conversation. Unfortunately, these dialogue choices seem to be largely for show. There wasn’t much change in my different choices in dialogue, leading to conversations that seemed to end the same way.

It’s the characters that kept me the most intrigued though as I steadily grew my kinship with each group member. Each one had their own story and it was intriguing seeing how they dealt with certain story moments and situations. The story was enjoyable on its own, but the characters helped boost it even further.

Gameplay in Shiness has plenty of components, but players will be primarily taking part in combat, exploration, and puzzle-solving throughout the campaign. Starting with combat, this is likely where players will get the most enjoyment. As previously mentioned, Shiness‘s combat is a hybrid of turn-based and real-time fighting. When a fight starts, players face off against a single enemy at a time. Even if there’s more than one enemy in an area, the fight is still a 1v1 fight split into multiple parts. Now, if you’re worried that this makes combat too easy, don’t fret; combat still offers a great challenge consistently thanks to the plentiful options available and hard-hitting enemies. 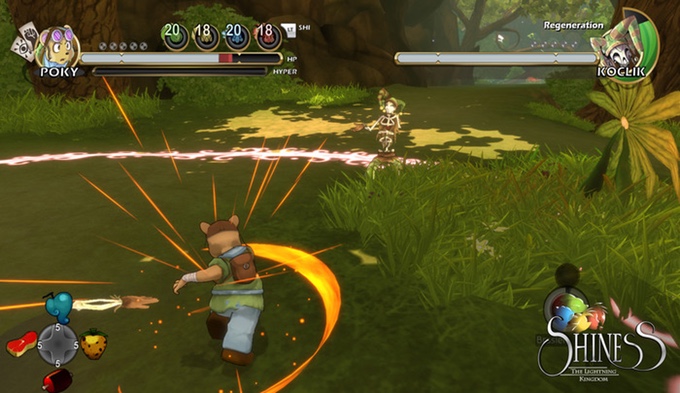 Melee combat is limited to punch, kick, dodge, and parry, but the game’s Shi system really opens up the combat. In the same vein as The Last Airbender, each character gets their own element to play with. Fire, water, air, and earth are at your disposal with each playable character having their own element to use in combat. This helps spice up each combat situation and allows each character to feel like they have something unique to offer. The various enemy types, each with their own interesting attack patterns and unique design are also much appreciated.

Unfortunately, some of the enjoyment in combat gets held back by some technical limitations as the enemy animations can get choppy and drop in frame rate during more intense fights. This can give enemies a chance to get a sneak attack with you being completely defenseless, leading to some frustration. These are typically only momentary setbacks, but it does happen often enough to warrant mentioning. Also, even with experimentation on different combos and strategies, combat can get a tad repetitive. 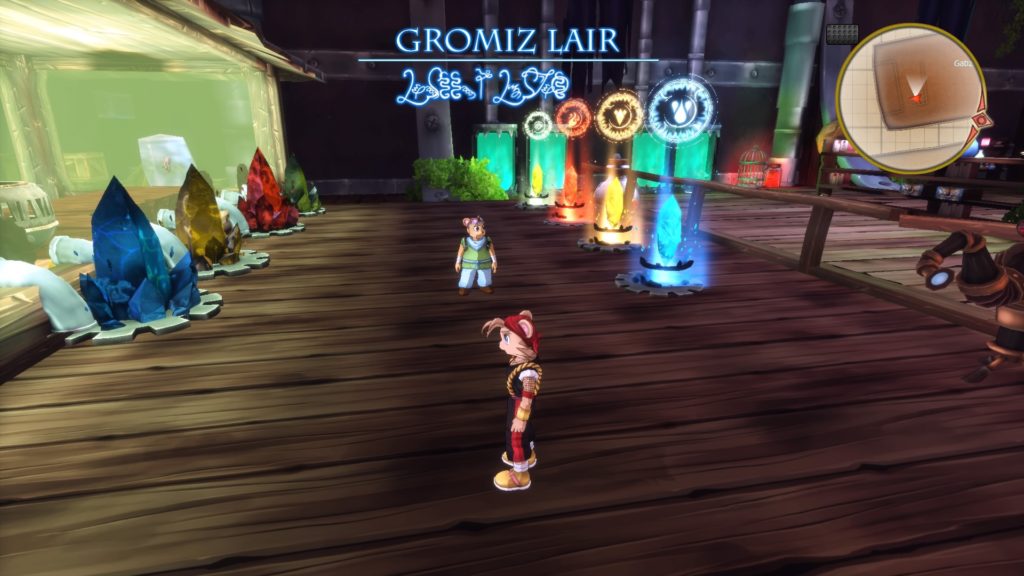 Thankfully, developer Enigami likely expected this, so they included the seamless fighter-swap system. With this, you can take control of whichever fighter is your favorite at any moment. Simply press a single button (LB in my case) and you immediately switch to a fighter like Poky or Rosalya at a moment’s notice. It’s a great system that helps make gameplay feel more dynamic and helps make each member useful. This, alongside the turn-based/real-time hybrid, leads to a combat system that’s both engaging and ever-changing.

Selectable equipment was a nice touch, but I wish the system was more expansive than it is. Without any weapons or substantial additions to other combat moves, the system ultimately feels limited.

Developer Enigami clearly put a lot of heart and care into the visuals in Shiness. Each location has a bright visual style that serves as a vibrant backdrop for each explorable area. The map and characters are highly stylized so that they fit that same anime aesthetic. However, while character design and world design is appealing and interesting, there are some detail issues. The ground and wildlife have a tendency to lack defined detail, as seen in the below picture. The character models also do not hold up too well when seen up close during cutscenes. 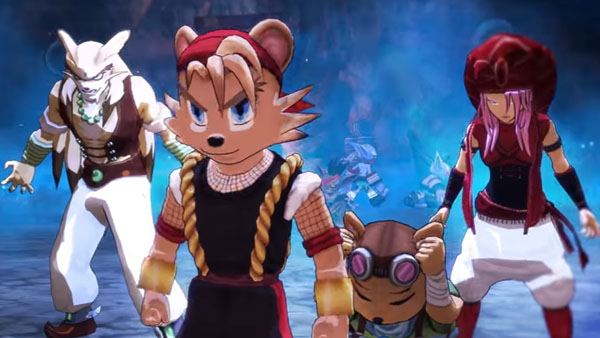 However, with the stunning art direction and vibrant colors, it’s easy to forgive these detail issues. Each environment is easily distinguishable from the other and is visually appealing enough to motivate players to explore every potential area on each given map. Considering the scope and size of the map as well, it’s impressive what Enigami did here. Some lacking details is certainly forgivable in exchange for a vibrant open world that demands exploration.

The sound design is notable thanks to mostly quality voice-acting and a well-utilized soundtrack. Key moments in the game feel heightened and especially well-executed thanks to the musical cues and score. The tracks themselves aren’t exactly all that memorable, but they fit quite well with Shiness‘s aesthetic.

The voices of our heroes have a great sense of energy and character behind them as each hero offers their own unique presence. Each cutscene and conversation with them remained entertaining as you never quite knew what you’d get with each one. Chado has a strong personality and speaks his mind, even if he really shouldn’t. Kayenne gives the team a mature figure to look up to and Rosalya offers that soft-spoken soul that helps balance all the personalities. The only time the voice-acting dipped below quality or got slightly irritating was when those crazier moments were going on and the VO would sometimes overdo it. This didn’t happen very often, so it didn’t take away from the otherwise quality voice acting.

Although this is certainly an in-depth RPG, it’s in the replay value that the game somewhat falters. With the limited loot system and the overall low amount of customization, there’s not a whole lot of new things you can try in repeat play throughs. 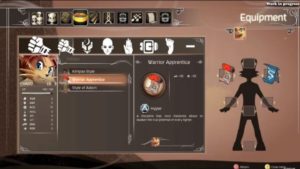 The game could’ve used more means of experimentation. That way, players feel like they can try out something entirely different the second time through multiple play styles. While there are upgrade systems and the Shi system to appreciate, there isn’t quite enough new stuff to come back to. Because of that, the second playthrough fails to be nearly as fresh as that first venture across the Celestial Islands.

Please see below for my summary and overall review score for Shiness: The Lighting Kingdom.