One of the games announced last year during the E3 was State of Decay 2. Undead Labs has posted some interesting concept art however, there has been no gameplay or word of when we’ll get to play the game. That said, it looks we’ll find out soon enough, according to the official Twitter account: 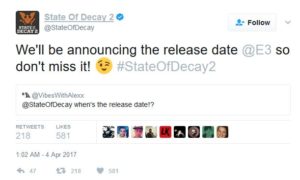 Just a couple of months before we find out then. The original State of Decay was a huge success, with millions of players. It’ll certainly be interesting to see exactly how the sequel improves upon it and shakes things up.

Here are some further details for your straight from the official website:

State of Decay 2 is a game where you tell the story of your zombie apocalypse, alongside up to three of your friends. How will you survive?

Welcome to our four part series on the human survivors inside the game! Just as in the original State of Decay, you don’t play as any one individual. Instead, you’re a community of survivors, all of whom have their own unique combination of appearance, traits and needs.  It’s up to you to manage and satisfy these needs while executing your strategy in pursuit of not just surviving, but instilling belief among your community that tomorrow will be a better day.

A big part of the State of Decay experience is that you recruit people as you find them. People have on them whatever they happen to have been wearing when the apocalypse broke out, or maybe the best outfit they were able to take off the body of their dead neighbor. (As with the original game, the look of each survivor is locked in when you recruit them.)

So how did we put together the look of the survivors? A whole lot of photochop, well that’s what Undead Labs Art Director, Doug Williams, calls it. In a game with far, far fewer human beings, you’d start with a “pie in the sky” concept piece such as this one below and develop from there.