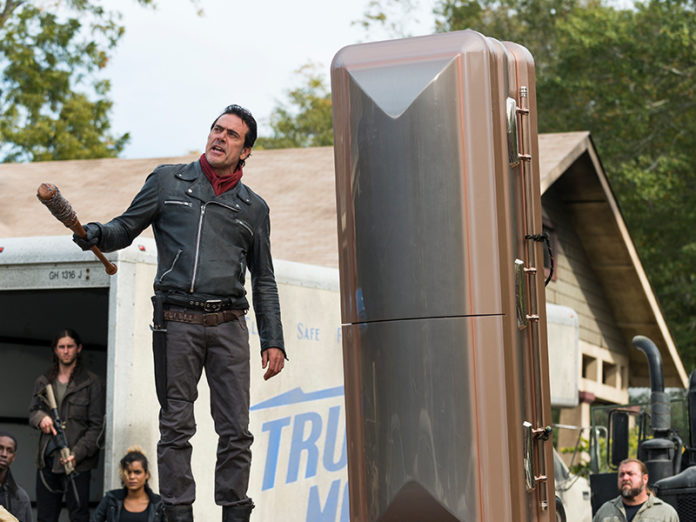 So this is it. It’s finally here. The showdown with Negan. So how was it? Well it was the second best episode of the season for me. There wasn’t going to be a better episode this season than that first episode. It’s kind of poignant in a way as there are a few similarities to that first episode. The episode where we learnt of Negan’s ferocity. In The First Day of the Rest of Your Life a lot happens and it’s mostly done very well.

Before the credits even begin at the start it is fairly safe to assume we know what happens to Sasha. We see her in a dark environment, wearing headphones and looking like she is struggling to breath. In the last moments, the earphones fall out and she looks to pass out. Much of this episode is about Sasha and her fate. Throughout the episode we go back to this dark environment, she says a phrase and it appears she is repeating something that Abraham has said to her. Yes Abraham is back, if only for a flashback to just before they set off from Alexandria to help Maggie.

In the flashbacks, Sasha is trying to get Abraham to stay. She has awoken from a dream and she has foreseen Abraham’s death. At one point, I briefly thought they were going to screw us with an “it was a dream the whole time” load of nonsense. Thankfully this was not the case. So what is going on? Where is Sasha? It sounds like she’s in the trunk of a car, on her way to Alexandria with Negan and The Saviors. Earlier in the episode, Negan came to see Sasha and set to barter a plan for how he was going to deal with Rick. He wants to kill three of the Alexandrians. Sasha manages to whittle him down to one person, “only one person has to die” she says. Quite ominously. 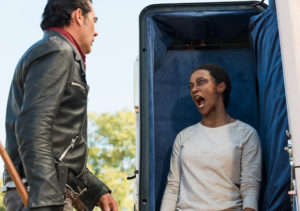 Meanwhile at Alexandria, Rick is dealing with Dwight. Dwight explains that he wants to take out all of Negan and he can help. He says he knows that Negan is on his way to Alexandria soon and he will be able to slow him down. Giving Rick a chance to prepare for their arrival. They eventually let Dwight go, much to Tara and Daryl’s chagrin. He does stay true to his word and The Saviors are delayed by trees in the road. Negan believes it to be Alexandria who has put these obstacles in the way.

During this time, The Scavengers and Alexandrians are getting set up (and of course The Scavengers drive trash carts). There’re a lot of bodies in Alexandria at this point with lots of weapons. Michonne is set up with a Scavenger and their sniper rifles, most of the survivors are on the wall. They have planted a bomb inside a truck just outside Alexandria, a trap for Negan. It isn’t long before Negan and The Saviors arrive at the gates of Alexandria.

The tension is palpable and Negan is nowhere to be seen. In fact, all Rick can see is Eugene. Eugene tries to convince Rick that they should surrender. Rick, although not verbally refusing, signals Rosita to blow up the bomb in the truck. Rosita presses the button and everyone ducks for cover but nothing happens. Before they realize what is happening they are staring down the face of all the guns the Scavengers have. It seems we have found our ‘little birdie’ from the last episode. The one who told Negan what was going on. Apparently, Negan put up a better deal, promising them ten of the Alexandrians, presumably as slaves/captors.

The ball back in Negan’s court, he emerges. Revealing a coffin. As I have said plenty in these reviews, Negan is just spectacular. He owns the scenes he is in. This one is no different. He waxes lyrcial about what just transpired and how he has Sasha in the coffin alive and well. However, he does not know Sasha’s plan. During the dark scenes just with her, we eventually see Sasha take the poison that Eugene provided for her in the last episode. I was proud to have guessed what was coming before it did. Sasha died and over the course of the journey she became a Walker. A Walker trapped in the coffin waiting to be let out.

Cue Negan. Sasha’s plan was to become a Walker and take him out as a Walker. It certainly looks like she might succeed, as Negan opens the coffin, he is take aback and falls off the flatbed he is on with Walker Sasha on top of him. Alas Negan does not succumb and all hell breaks loose. The Alexandrians begin their fight back and a gun battle ensues. Before long it is brought to an abrupt halt by Jadis, shooting Rick in his side and taking him hostage. She marches him to where The Saviors have caught Carl and he is on the ground on his knees. He we see an echo of that first episode. Both Rick and Carl are now at the mercy of Negan. 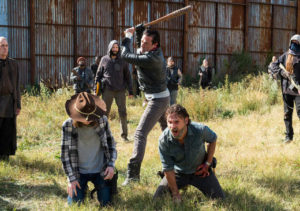 An intense exchange between Negan and Rick takes place, Rick openly defiant against Negan, despite his threat to Carl. During this we hear a bloodcurdling scream from where Michonne was. Assuming the worst, Rick is looking broken and distraught, much as he did in episode 1 of season 7. Negan goes to kill Carl “in one hard swoop, because I like him”, just as he does he is again taken aback, but this time by Shiva. The tiger of King Ezekiel. Talk about leaving it to the last-minute. Earlier in the episode we see subjects of the Kingdom making their way out with armor and guns. They are soon joined by Maggie and the Hilltop folk.

With their forces tripled, Alexandrians begin their fight back. Taking out Scavengers and Saviors wherever they can. Negan falling back, clocks that Maggie is alive and that both Hilltop and The Kingdom are fighting against him. He manages to make an escape with the remaining Saviors (giving the ‘finger’) as he left. Many of The Scavengers also got away by throwing smoke grenades, shielding their escape.

Daryl, still being wholly uninteresting (might as well make it the whole season), spots a message, we assume is left by Dwight stating that he didn’t know Negan knew about their plans. Rick finds Michonne, beaten up but alive, having beaten her adversary on the rooftops. Jesus and Maggie track down the Walker Sasha and put her out of her misery.

As the episode begins to close up we hear a dialogue between Maggie and Sasha bringing us closure for Sasha’s death. Saying goodbye as such. They pay homage to Glenn and Maggie says that there was no question in her mind that she would help. Glenn helped, before he even knew who Rick was, he set the example. 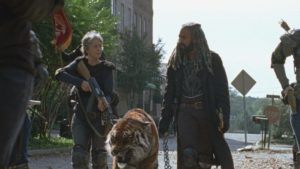 Back at The Sanctuary, Negan looks angry. He suspects Eugene helped Sasha die. Eugene was able to possibly explain how she died, positing a lack of oxygen. Negan turns and steps out into a courtyard, below him an army of Saviors stand waiting for his word. Negan says simply “we’re going to war.”

The First Day of the Rest of Your Life was a strong closer to season seven. It was tense, emotional and also brilliant. There’s still stuff to deal with, I’m fairly glad that Negan got away, he’s brilliant. Gregory has vanished. The Scavengers might be back and Oceanside are going to be pissed! The fight will continue in season eight…come October.