It strikes me that a good game is one that leaves you wanting more. The game that makes you excitable to go back to it after faffing about with the monotony of work and general life. There’re plenty out there of course, one from recent memory has to be Dishonored 2. It is nice when you find a game, however, that is easy to pick up and play and doesn’t require a heavy investment. A game that you can dabble with for half an hour and still get a “full game” in. Let me introduce you to Vertical Drop Heroes HD.

Vertical Drop Heroes HD is a procedural platformer RPG hybrid with roguelike elements. If you’re unfamiliar with ‘roguelike’, it is a sub-genre of RPGs which feature dungeon crawls through procedurally generated levels. Armed with a variety of skills and traits, you must use your cunning and reflexes to survive the dangers of each stage, until you face the final boss and uncover the truth in the game’s story. You play as a procedurally generated character, born out of a mix of available skills to you from a pool that you can increase through play. 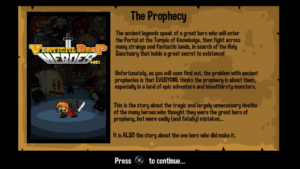 There isn’t much of a plot, not that games like this need much of a story. You have a quest and it is all spoken of in the initial screen when you begin the game. The story is quite clever in itself, knowing that the game will result in the deaths of many of your procedurally created heroes it has created a prophecy that speaks of the “one” who will succeed in their quest. This is absolutely true, I have lost count of the amount of times I have bitten the proverbial bullet in my quest to be victorious.

Your task is to explore the ten procedurally created world and defeat the enemies within. Each level has a boss which you must defeat to progress to the next world. Each world is distinct and constant in its environment. For example, I know the order of each level and the environments they will be, but each level’s layout and the enemies you face are different in each playthrough. 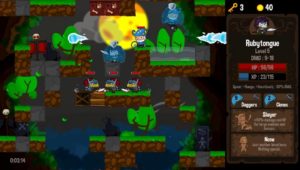 Vertical Drop Heroes HD has a pretty unique look. It is bright and colorful, whilst maintaining a look of nostalgia; it is a game that wouldn’t look out-of-place on the Sega Genesis (Mega Drive). Each environment is fairly unique and there is a good variety that enables some environmental hazards to be included. The characters and enemies look great and the art style fits the game perfectly; all the characters have fairly substantially sized heads, as though Funko have designed the game. Each of your characters have their own look and feel and are enjoyable to watch too. Collecting power ups and upgrades nets you a gleeful smile from your hero as they move to their next kill.

The game occasionally can feel ‘busy’, but never to the point where you lose sight of what is going on. Even when the screen gets noticeably busy with enemies you can keep a track of your hero, thanks in part to their unique look. All characters have a small health bar above their heads that indicate their life; even then this isn’t intrusive or a waste of space. Even though there is a portion of the screen segmented for your stats I did find the health bars useful, especially when it gets hectic. It stops you from having to constantly flit between the information section and the game itself.

In the information section you will find details about your remaining health, current XP progress, coins and the number of keys/coins you hold as well as your power ups. As you play through the game you will increase the core abilities of all future heroes that you play as. Finding the old lady with the wildebeest looking animal will give you the option to purchase a new ability. These abilities are added into the skill pool that generate randomly with the character’s stats. Some of these skills are really useful, such as starting with five keys to unlock chests and pathways. Others are more risky, for example, take a HP decrease to increase damage against bosses; you may need to take that risk to make progress. 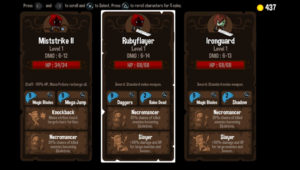 I really had fun with the randomness of this. Perhaps I have been a little sheltered, as I haven’t had much experience of roguelike games, but this was good fun. I like the uncertainty and experimentation that goes into picking a character. Some are faster than others; some can double jump, some are super strong with low HP but others are weak with loads of HP! The more you play, the more you’ll know what you might encounter and you start to think about how a new skill or ability might change the dynamic of your heroes survival ability. The same goes for your additional abilities. Assigned to ‘B’ and ‘Y’ (Xbox One) you get two random abilities for your character to use. My favourite one being the ‘Dwarf Turret’, which is exactly as it sounds, a beardy dwarf with a gatling gun!

The game gets its name from the fact that all the levels are vertical. You begin at the top and must work your way to the boss at the bottom of the level. It reminds me of Mr. Driller when you have to navigate the best (or potentially least dangerous) route to get to the bottom. You can open pathways, chests and other contextual commands by pushing down on the left analogue stick. This is really my only gripe with the control scheme; for the most part it is a simple and effective system. Occasionally I would accidentally open a chest (using a valuable key) on a chest that I didn’t want to open because I was too close to pushing down. It only happened occasionally but it was enough for me to notice it as an annoyance. Especially when I freed the companion who wrecks the level. 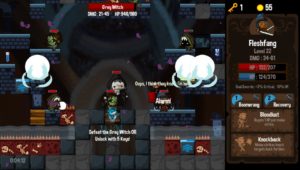 You will come across cages through the level with a variety of different hero companions. Releasing them, using a key, unleashes a buddy who helps you against the bad guys until they are beaten. Sometimes this happens quicker than you would like; as the game is random in how it creates the levels, occasionally the cage will not be in the best position. This means that ‘saving’ the buddy means they get caught in a spike trap or get done in by a nefarious bunch of enemies, just waiting for their chance.

I would generally welcome the help of all but one of the buddies. The armored knight buddy is a pain in the ass. He is great for getting through the level quickly, but not if you are thorough and like to explore. He just blows parts of the level away. I found myself falling much further than I would have liked, missing side missions/shrines for bonus XP because of this brazenly explosive take on life.

Sound wise, Vertical Drop Heroes HD matches the look in its retro feel. The audio reminds me of many 16-bit titles in the past. They are nostalgic in places and oddly satisfying. There’s something really enjoyable about the effects they use to create the water sound effect. The rest is functional and does what you would expect of it.

Music wise, it doesn’t grate as you might expect, given the era you could align it to. The music is slightly repetitive, but the levels aren’t overly long so you’re not likely to notice it. I am sure I have heard one of the music tracks in something else, but for the life of me I can’t place it. Either way it is enjoyable enough and seems to match the tone of the levels; the Egyptian level, for example, gets a suitable track.

Vertical Drop Heroes HD is all about replayability. You’re very unlikely to finish this in your first playthrough. Most playthroughs of the game will take you less than an hour and that’s if you actually make it to the end. You will surely die numerous times before you have unlocked enough of the permanent health and strength upgrades to survive long enough. You can do this by amassing coins through completing levels, defeating bosses, finishing in-level missions set by NPCs and using some of your abilities. 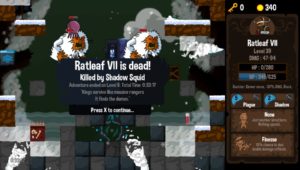 The game succeeds in having that “just one more go” factor. I found myself playing through again and again with a different loadout, or a character that I have become fond of. It never gets boring, each play is different and you become set that you’re going to win, that the final boss will fall! Well, I did anyway.

The game encourages you to play through to completion and past that. There is a ‘New Game +’ mode and continuing to play and complete the game will net you some new weapons and upgrades for your character. Plus you will need multiple plays to unlock all of the different abilities that are available to your character. The achievements in the game also facilitate this, encouraging multiple playthroughs and experimentation with the game, including the ‘pacifist’ mode. A mode that rewards you with collectible orbs for not directly killing any characters yourself. It isn’t easy (be sure to turn off “Auto Attack” in the options).

The game does have a local multiplayer, but alas no online. I feel this is a shame and would have really relished playing this online with some of my gaming buddies. I see the appeal of the couch co-op, but why not both? 99% of the people I play games with are online, so it feels like this mode will go without use. As I did not have anyone to try out the local multiplayer I can’t comment on how well it works.

Vertical Drop Heroes HD is an excellent and brilliantly fun title. Its ability to give you the urge to have ‘just one more go’ and want to beat the wholly annoying final boss is testament to its design and style. It looks and sounds great as well as playing well. You’ll want to get all the abilities and powers and you’ll certainly want to see your heroes’ smiling face as he levels up; giving you a much-needed HP boost at the last-minute, something that you’ll mirror upon doing so. Kudos to Nerdook Productions for Vertical Drop Heroes HD, now if you’ll excuse me I am going to go for another round.