Loading up Brawlout, the throwback style immediately becomes obvious. Clearly drawing inspiration from Super Smash Bros, Brawlout is currently in Early Access on Steam, with a full release coming to PlayStation 4 and Xbox One sometime in the future. I’ve provided my early Brawlout impressions so gamers might decide whether this is something they’d like to check out.

With that in mind, this is not a review; instead this focuses on my impressions in the Early Access form of the game. However, I’ve broken my thoughts down into segments that reflect our traditional review format.

Right now, this aspect of the game is fairly threadbare. The singleplayer section is coming soon however, right now we are limited to character biographies. 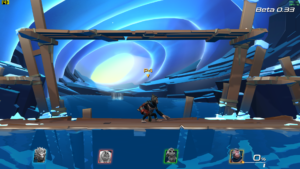 With this in mind, the cast is reasonably diverse yet fairly limited.

Currently, the roster consists of six characters, with an additional three coming in the near future. The background lore for each fighter references incredible worlds, cultures, tribes, criminal organizations and the like. Yet frankly, none of that is present in the game itself, at least right now. Hopefully this is fleshed out far more in the future.

You don’t have a health meter. Instead, a character is eliminated when knocked off the map. Each fighter starts a match with three lives, so combat is based around carefully (or chaotically) knocking your foes to the edge of an arena so they can be pushed, shocked, frozen, hurled, or kicked off the playable area.

Each of the six brawlers has their own fighting style, with different speeds, attacks, specials and jumps separating them. For example, Volt is a lumbering wolf-like character. He has a nice balance of speed and strength, with some impressive reach in his jump. However, what truly makes him stand out is his special abilities. 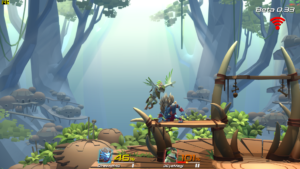 He can hurl small lightning bolts, set a shock trap on the ground and even hit a tribal drum to hilariously summon a small storm.

While each character plays differently, the lack of abilities is something of a disappointment. With so few characters currently, the differences in each are by far the driving force for what makes the game enjoyable. However, with only six characters with very few abilities, repetition sets in rather quickly.

One very cool feature is the Rage meter specific to each character. The more punishment you take in a match, the more your character’s rage meter builds. When it is filled, activating Rage makes your fighter hit harder, do more damage, move quicker and more, all in ways unique to them. For example, Paco, a giant four-armed toad, is based primarily around grappling his opponent. With Rage active, his attacks hurl enemies much farther across the map.

The online modes are currently extremely limited, with only a tournament mode and casual mode. Casual modes are restricted to 1-on-1 matches between players, who then vote on their choice of a handful of maps. Tournament matches allow 1v1 or 4-player brawls, the latter of which I found to be the most chaotic and enjoyable. I found it very difficult to find matches, with average wait times well above seven or eight minutes. However I’m sure that’s due to the game being in Early Access at the moment.

Brawlout uses a simple art style, with a cartoonish range used for the color palette and exaggerated bright greens and reds. It’s a throwback to older games and it works decently enough. At the highest settings, the textures are clean and lack any low-resolution patches or segments. The requirements for running the game are fairly low so even those gamers with potato PCs can easily run it.

There’s also an impressive list of tweaks you can make, with lots of graphics options many developers skip over. 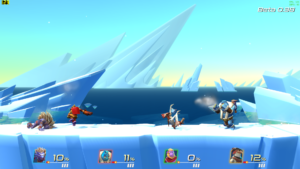 Now usually, the game ran without any issues or bugs whatsoever, however there was one glaring exception: jumping as Volt on the watery map caused the framerate to tank twice in a row. It’s a weird glitch, but I’m sure that will get fixed in a patch soon.

The soundtrack has a couple of catchy, upbeat tunes that continually aid with invoking early console games. Unfortunately, it’s quite minimal, with the same handful of brief tracks repeating nonstop without variation.

Brawlout is a lot of fun, especially in the 4-player mode. That said, once you’ve had your fun exploring the handful of modes, right now that’s all there is to it. I’m sure this will be far more expansive in the future however for now the only reason to replay it would be for some games against your friends or family.

With that said, all six fighters are incredibly well-balanced, which makes me very hopeful for the competitive scene and overall long-term playability once the game leaves Early Access.

Ultimately, Brawlout shows quite a bit of promise. The characters are unique, the gameplay is simple and smooth, and the artwork is nice to look at. Even so, this is most definitely an Early Access title, with only six fighters and no storyline or even much variety in the multiplayer. I have a difficult time recommending it right now, even at $20, but I strongly suggest keeping your eyes out for the final release, as it will most likely be worth experiencing.