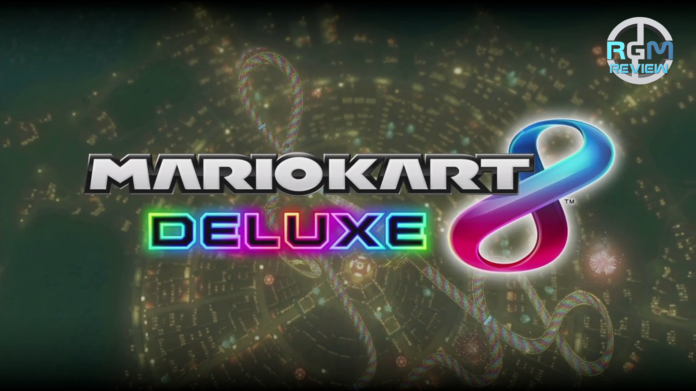 All images have been captured in-game using the screenshot functionality of the Switch.

There’s something magical about the Mario Kart series. Maybe it’s because I spent many an hour of my youth doing my best to trounce my friends; learning all the shortcuts, the nuances of each character and the best weapons to use. I spent an age playing Mario Kart 64 and a good amount of time on Mario Kart: Double Dash. After that, I spent very little time with the Mario Kart series. I dabbled with the Wii and DS iterations, but nothing on the same level as the N64 or GameCube iterations. To be honest, there was a concern within me that I had lost my zeal for the Nintendo racer. With Mario Kart 8 Deluxe, however, I can confirm this not the case; the new Switch racer has swiftly reinvigorated my love for the series!

What can be said about Mario Kart 8 Deluxe is that it is a supremely good-looking game. The courses are gorgeous and the character animations are clear and fun. Each character has their own unique style and it is easy to differentiate between them, even the Koopa kids. This clarity remains the same when you transfer to handheld mode; it never feels like anything is difficult to see, even when the action is full on. The game never struggles with a lot going on either, weapons can be flying and there can be a lot happening with both the environment and the racers and the game chugs along nicely. It’s buttery smooth. 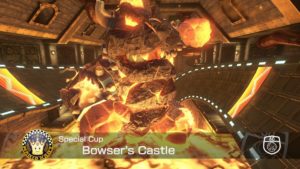 There’s an absolute plethora of variety in the tracks. Taking inspiration from Mario Kart’s of old and remaking them, they look great. Even with 48 different tracks, you never feel that a course has been rehashed or that they look too samey. They’re bright and bustling with life. Piranha plants on the side of the track look like they’re there for show, but then jump out at you as you drive past. Mario Kart 8 Deluxe certainly carries on the tradition of making the courses interesting and playful.

There’s some great attention to detail in the courses too. Themed courses benefit from having an overall in different aspects. One example is on the Hyrule Castle track, of Legend of Zelda fame. The coins you collect to grant a small speed boost are Rupees, the in-game currency in the Zelda titles. It’s these nods that make the game a true sight and pleasure to play through. 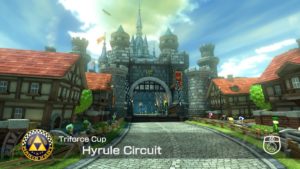 There’s a lot more depth to this Mario Kart than I have ever experienced before. As I recall, your character was the decider of how much speed, acceleration and handling you were in control of. In Mario Kart 8 Deluxe, however, it seems your character of choice has no bearing on this. Now it down to the kart (or bike) you choose and what you chose to accessorize it with. As you play through the game you will unlock vehicle customizations by succeeding in the Grand Prix races and other events. The customizations include your kart’s body, the wheels and the glider. The vehicles switch between amphibious vehicle, to glider or to hovercraft depending on the terrain on the track. Though these mostly don’t affect gameplay, the glider gives you the ability to seek out different routes or shortcuts that might be on a different verticality. 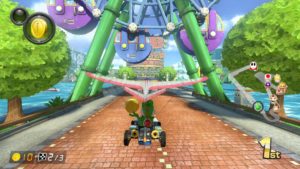 Whichever vehicle customization you select will change your handling, grip, acceleration, speed etc. This way you can always pick your favorite character and not worry if one is more difficult than the other, which is nice. Though I did always like learning how to win with Bowser in Mario Kart 64. He needed a lot of precise driving as a wrong move may ruin your race, especially on 150cc.

What has been added to Mario Kart 8 Deluxe is something of perhaps pure evil (in a good way). I have only ever known there to be three difficulties (50cc, 100cc and 150cc) and mirror mode. Now, however, there is 200cc speed/difficulty. It’s like the Dark Souls of Mario Kart. You need to have your wits about you and willingness to use your brakes well. It will test you for sure. 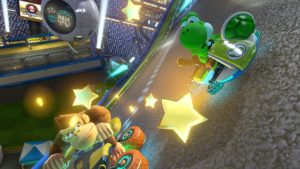 In terms of controls, the game handles brilliantly, as you might expect from a Mario Kart title. You use the ‘A’ button to accelerate and ‘L’ or ‘ZL’ fires your weapon, whilst ‘R’ or ‘ZR’ is your powerslide/jump button. Perhaps I’m too familiar with racers on other formats, but I found myself yearning to use one of ‘Z’ triggers to accelerate and reverse. It feels more natural. Not that it’s a major quarrel with the game, just a preference. Even just the option to change the controls would be welcome.

Tilt controls are present in Mario Kart 8 Deluxe and in line with my experience with every Switch game so far, they have been put into the “off” setting immediately. Trying them, however, it actually made me feel slightly nauseous and you need to move the screen around far too much (in handheld mode). There is also an “auto-accelerate” and “smart steering” for beginners; most of the work is done for you. I’m curious why these are set to “on” as a standard, not that it’s a problem to turn them off in the pause menu.

I also miss the ability to switch between my weapons, like in Double Dash. I know the point of that was that you were switching between the players in the kart; it’s a shame that I have to waste an item that may have been useful later in order to protect myself. That being said, most of the tricks from previous iterations are there and very much welcome. For example, maintaining a power slide gives you one of three levels of boost. There is also the return of the on-course coins. I don’t remember seeing coins since the Game Boy Advance version of Mario Kart; giving your engine a slightly faster speed to the power of ten maximum coins to collect. 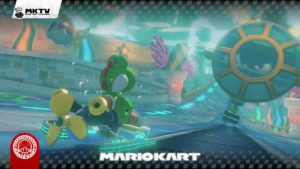 Being struck by an object, weapon or course hazard will cause you to lose some of your coins, but they a fairly abundant, so are easily recouped. The weapons are great fun too. Old favorites (and old enemies)return as well as some new items too. Notable additions include:

It seems there might now be a counter to the blue shell if you have a sound horn too, which is awesome and naff in equal measure; depending on where you are in the race of course. Got to say, I do miss the noise the blue shell used to make in previous versions. That was terrifying! 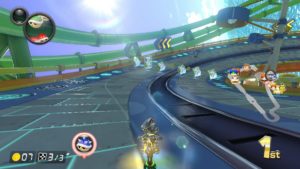 As with most Mario Kart titles, nay, most Nintendo titles, the sound is mostly spot on. Occasionally, I wasn’t enamoured with the music for the track but it was never anything atrocious. I would prefer to hear the classic music from Mario titles, but I appreciate this is not the way Mario Karts work.

Some of the familiar sounds and effects are there. Entering the third lap will of course trigger the faster music, to really put the wind up your sails. As I say, I miss the homing sound of the blue shell but all the other weapons have satisfying sounds. It’s great to hear vocals from the characters too. They all have their own voice lines and are noticeable throughout the races. Charles Martinet is always welcome in my ears with his cheery vocalization of Mario and his buddies.

Everything is pretty much available to you from the off, there’s no hidden courses to unlock, all 48 are right there to play. Same goes for the playable characters, except for one. As I spoke of earlier, there are a lot of customizations to unlock. There’s even some extra special shiny ones to collect if you manage to get gold cups on 200cc grand prix!

There’s plenty for you to do, both on your own and with others in Mario Kart Deluxe 8.

What struck me immediately was how much was on offer right from the start. As soon as the main menu opens you are given a wealth of stuff to do: 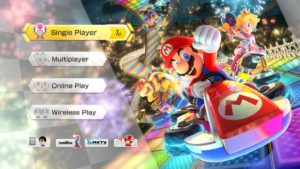 There is no hand holding in Mario Kart 8 Deluxe. Not that you really need it, it’s fairly self-explanatory. 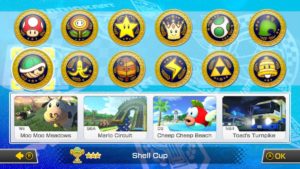 The grand prix are what feels most familiar and of course offer you most of your challenge (on the higher speeds at least). You won’t blast through them in a day (did I mention the 48 tracks!?!?) and you’ll still go back after that.

Battle Mode is a great addition and is a return to form as it is seemingly absent from more recent iterations, in this guise at least. Battle Mode itself has five different game types; Bob-Omb Blast, Coin Runners, Balloon Battle, Shine Thief and Renegade Roundup. You’ll be pleased to hear that they are all great fun too! There’s plenty of built-in ghost data to race as well as facing off against your friends.

Not to mention, if you absolutely exhaust everything, there’s always online multiplayer and versus! 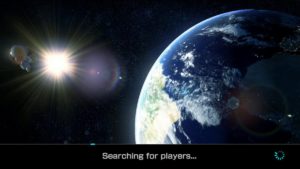 Online, you can play against up to 12 players from around the world. The online multiplayer worked really well, for the most. Occasionally the game had trouble connecting to a match and on a couple of instances I found myself disconnecting after waiting for the next game to start. But, returning to the main menu and restarting the online option got me in back in fairly quickly so it never felt overly tiresome.

In-game, the online connectivity was great and I didn’t clock any lag throughout. It was great fun and transition between games were fairly quick too. Everyone getting the chance to vote on the next track or mode. In the lobby, you can communicate with other players via a small selection of pre-determined text options. As the Switch has no voice chat as yet, this is the only way you can converse with other players. Not a big deal, especially given how I was playing against people from a wide array of different countries; they may not be able to understand me anyway! 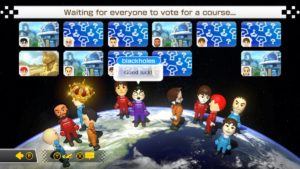 Mario Kart 8 Deluxe is an absolute triumph. You can check out my summary below.