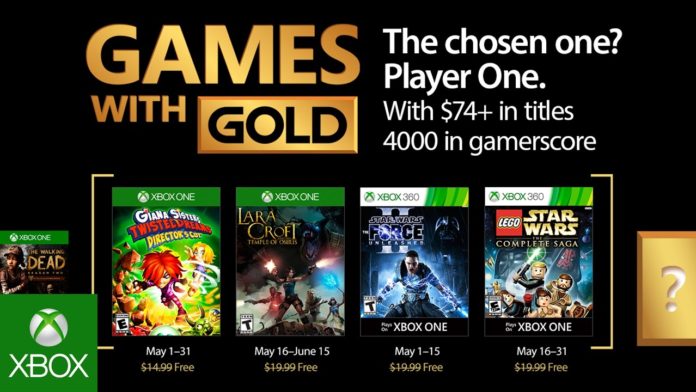 In case you didn’t see it, Major Nelson has announced May’s Games with Gold, giving us the next free titles for Xbox Live Gold subscribers. Making the announcement on his blog, we see four titles make their way to Xbox consoles in May. Check them out below:

In his post, Major Nelson, revealed that Giana Sisters: Twisted Dreams Director’s Cut and Lara Croft and the Temple of Osiris will be heading to the Xbox One.

On Xbox 360, there is the Sith-laden sequel Star Wars: The Force Unleashed II as well as the always awesome Lego Stars: The Complete Saga. Don’t forget that means there are four titles on the Xbox One (two Xbox One titles and two via backwards compatibility from the Xbox 360) and two titles for Xbox 360 players.

You can find more information on the titles that will be available during the month of May 2017 for Xbox Live Gold members below.

May’s Games with Gold on Xbox One are:

Giana Sisters: Twisted Dreams Director’s Cut ($14.99) will be available through the whole month of May, from May 1st until May 31st.

Below are the titles you can download on both Xbox One and Xbox 360:

If you’re a gold subscriber, throughout the month of May, that is a possible total saving of $74.96 worth of new games if you decide to install each title. This is another great month, especially in terms of Xbox 360 games; very much going for the “May the fourth be with you” and all that.

You still have to ability to claim your free titles for the Xbox One via the website. You can do this even if you don’t own the console. Secure your free licenses for the games so that when you upgrade in the future they’ll be waiting for you. Continued access to those titles will be available providing you keep a gold subscription.