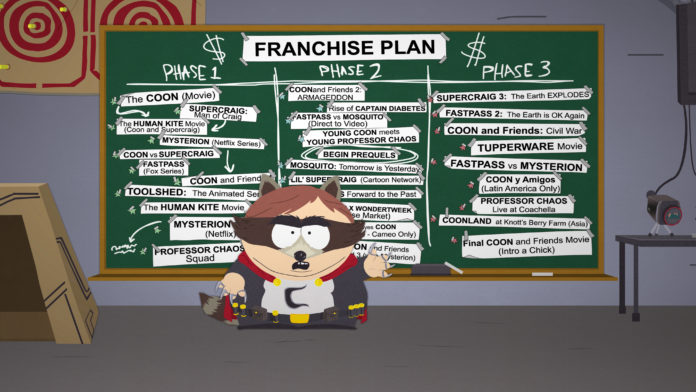 I was starting to worry a little about South Park: The Fractured But Whole. Although I was confident the game would see the light of day, the numerous delays were beginning to raise red flags. Thankfully Ubisoft have now given us details of when the game will release and a new trailer to boot.

Making an announcement earlier, on their blog, Ubisoft have made sure we will be returning to Colorado this year. South Park: The Fractured But Whole will release worldwide on October 17th 2017. The game will be releasing on Xbox One, PS4 and PC. Alas, as it stands, the game will not be coming to the Switch.

You can check out “The Farting Vigilante” trailer below:

Taking their inspiration from the superhero themed episodes of the TV show, The Fractured But Whole sees the return of “The Coon…and Friends”.

More details from the Ubisoft blog can be seen below:

“With crime on the rise in South Park, the streets have never been more dangerous. As the sun sets on the quiet Colorado town, havoc and chaos unleash a reign of terror and the seedy underbelly of the city comes alive. The town needs new heroes to rise! Eric Cartman seizes the opportunity to save the town and create the best superhero franchise ever, his own Coon & Friends with himself as the leader, The Coon.” 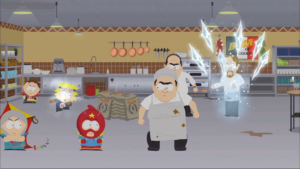 “Every superhero has an origin, and Coon & Friends are no different. Continuing in their role as the New Kid, players will discover their backstory, assemble their unique costumes, and harness their fart-based powers from numerous hero classes to create their own original hero. An all-new combat system offers unique opportunities to master space and time while on the battlefield, and a revamped looting and crafting system gives players the freedom to craft their own equipment to aid them in battle.”

It all sounds really awesome and the trailer on its own made me laugh! South Park: The Stick of Truth, the Lord of the Rings inspired original, was an excellent RPG and the sequel looks set to be just as good. If you fancy revisiting the first one ahead of the sequel’s release then you can, if you preorder. Preorders will come with a copy of the original made playable for the current-gen (through until the end of January 2018). Plus you get an in-game Towelie buddy, so why wouldn’t you; when you’re going to save the world you’ve got to remember to take a towel!