Deck13 Interactive, the developers of The Surge, has previously given us 2014’s Lords of the Fallen. With The Surge, they’ve moved away from the dark fantasy setting made popular by games like Dark Souls into a futuristic, high-tech industrial nightmare. I believe it makes a name for itself, with innovations that push the format forward.

This said, it still suffers from some of the same problems as Lords of the Fallen, with an un-compelling main character and an even vaguer plot.

In The Surge, the world’s resources have been almost entirely consumed, with Earth absolutely ravaged. Much of the workforce has been disbanded, with automated labor taking over, except for those willing to accept surgical implants to operate dangerous exoskeletons. 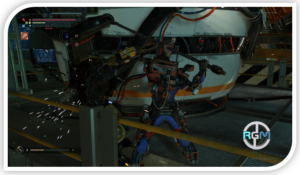 CREO seemingly works to repair the world and restore its natural state however, things are certainly not as they seem. Bizarre machines designed for war, with incredibly advanced technology, are among those manufactured by the company. When a mysterious disaster drives the machines and most of the exosuit workers crazy, they only get more efficient at killing.

You play as Warren, a handicapped man who joins the CREO workforce. In a case of the worst possible timing, right after joining the disaster overtakes the CREO facilities. Warren seems a decent enough person however frankly there’s not much to go on. He doesn’t really have a personality beyond “dull surprise mode” and the facial animation quality doesn’t help. It’s a bit of an odd case though, as he’s definitely well-presented in the CGI cut-scene at the beginning.

Without going into too much detail, CREO is hiding dark secrets, incredibly deadly dark secrets. The constant pursuit to try and figure out just what is going on provides great motivation for moving through the story. That said, I do feel that Warren’s reactions severely undercut the enthusiasm. He repeatedly states he wants to get out, and in multiple areas it certainly seems like nothing is stopping him from simply ‘abandoning ship’ so to speak.

The foundation of the gameplay and overall combat is very similar to Lords of the Fallen. However, it’s clear that from the start that multiple improvements have been made. Gone is the clunky rolling, instead replaced with a dash that consumes a bit of stamina. There are different weapons salvaged from defeated enemies and bosses, with everything from steel staves to exosuit-mounted blades.

One of the more intuitive evolutions to the gameplay is the addition of Energy. By chaining together vertical and horizontal attacks, you build Energy. Energy can be used in a variety of creative ways, such as healing yourself with one of the many implants, or more importantly executing and dismembering foes. By targeting a specific limb, you increase the chances of getting a gear drop for that particular body part. Even if you don’t need the gear, it’s still a good idea as enemies can be weakened or outright crippled by repeated hits to vulnerable body parts. It’s a pretty cool system that continues to help shake things up.

Bosses, of course, make grand entrances. However, even more so than in Lords of the Fallen, you really can’t just rush in and try pummeling them down. 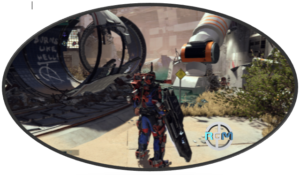 You won’t do any damage. Instead, you have to increase their threat level until they begin using ludicrously overpowered attacks. By turning said attacks against them, they then become vulnerable. All this put together truly helps separate The Surge from the other games it’ll inevitably be compared to.

This isn’t a huge problem however it’s worth mentioning each area has a very sharp difficulty curve. Even after grinding well past the level needed to complete one area, I was completely underprepared for the next. As you’ll have to grind the same sections over and over, it definitely makes some parts overstay their welcome.

All of the brutal gameplay helps to reinforce the industrial world run amok in The Surge. From the hulking killer warbots to the zombie-like controlled exosuit workers, everything has an eerie vibe, well capturing the atmosphere of facilities hiding secrets that are falling apart.

With that in mind, the game’s strength in this area is also its weakness. Very few locations are well lit, which isn’t a problem necessarily however, it lends a feeling of repetition when traversing the run-down facilities. At first this helps the creepy mood but over time it began to wear on me as I realized there wasn’t much more variety, particularly in the opening handful of areas.

The Surge looks decent enough, with clean visuals for the most part and a framerate that never dropped, at least in my experience. 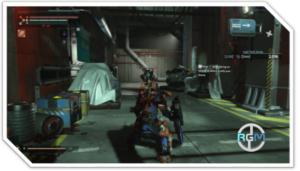 However, on close inspection, some of the textures aren’t high quality at all, with very low-resolution artifacts as standard on ground clutter and the like.

Machinery whizzes and clanks, enemies provide strange, disturbing mixtures of screeches and alerts. It definitely sets the mood properly. Yet, I have to say the soundtrack choice is incredibly odd. The same couple of songs appear to be repeating forever and ever. Maybe it’s a glitch but the endless repetition of tones and lyrics often threatened to drive me crazy!

Due to the variety of equipment and upgrade paths, there’s certainly quite a bit of replay value. Even late into the game, I found myself experimenting with different combinations of weapons, swapping to the latest upgraded gizmo. Additionally, the variety of implant combinations is near limitless, providing yet more reasons to experiment.

If you’re a fan of New Game+ modes, Deck13 Interactive has you covered, as there is a full New Game+ with enemies that scale to truly ludicrous levels. This also provides a great opportunity to find audio logs that further flesh out the story, or hidden areas you perhaps missed on your first playthrough. 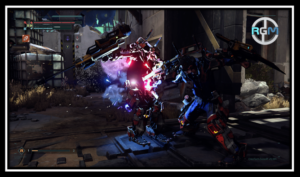 There are also even more aggressive foes that only appear in this mode, providing great layers of additional challenges.