Thanks to the constant teaser trailers released leading up to the launch day for Injustice 2, the main cast had been introduced, specials unveiled and storyline snippets revealed. As a massive DC fan who also loves fighting games I couldn’t really ask for more. Injustice 2 delivers on every front with only some minor annoyances getting in the way.

Injustice 2 had some very big boots to fill following on from Gods Among us, so let’s take a look at the end result:

Injustice 2 stays true to what was created in Gods Among Us however, it evolves the gameplay with expansions to supers, clashes, map transitions and character variety. The controls have evolved from the first installment in the franchise however, using the backbone of the original controls to create more freedom in connecting combos offers some of the most awesome combo combinations I have seen in a fighting game for some time.

The use of your meter can do a lot more than just initiate your special moves. By using portions of your meter you can link that into your combos creating devastating attacks. The more you link together, and add meter burn to the mix, the longer your combo can last. This also includes environmental awareness, by linking in damage attacks from the area around you and map transitions.

Notably, there is a rather extensive cast that feels like it fills some of the gaps that were in Gods Among Us. Characters like the Black Canary (who for some reason is wearing grey) have a very technical offensive style with rather fast movements that can make them hard to pin down. Gorilla Grodd (my arch-enemy in the game as my preferred character is The Reverse Flash) is a slow-moving character, until he gets a hold of you that is, whose gameplay style is offset by the sheer power of his attacks. The diversity in the cast allows for you to really pick a character that enables you to fight how you prefer. Zone controlling, ranged attacks, darting around the screen avoiding damage, it’s all possible once you find the right character for you.

Environmental attacks are a joy to use – slamming an alligator into your opponent’s face, using the punching bag to throw at your opponent (if you’re a heavy character) or punch the bag to see it swing back and knock your foe onto his/her butt (for light characters) is nothing but pure fun.

The map transitions are a thrill to watch, with some rather brutal attacks landed as you are sent soaring through the air, hit by buses, slammed through brick walls, it all looks fantastic on the screen.

One of my favorite elements of gameplay from Gods Among Us is the Super Moves for each character which are mainly ranged attacks with varying degrees of damage. Over the top explosive assaults, running over your opponent in a motorbike, running through space and time to slam you into an ancient sphinx, then instantly back to the Jurassic age to bitch-slap a dinosaur, all these supers are a hoot to watch – initially. This is one thing that I really wish was expanded on from the first installment in the franchise. Some variety in the supers you have available for each character would have made this element of the gameplay more engaging expanding the longevity of their appeal.

The defensive moves have had an overhaul making it much easier to combat ranged characters (like Deadshot who is almost impossible to dodge if you don’t get these moves down pat) coupled with a faster walking pace which enables you to dodge faster and adds more speed to the matches.

For those who are not massive fans of online combat or struggle with the peer-to-peer connection, there is a huge amount of single player content.

From the campaign to the Single Fight mode, the Multiverse and Practice mode, there is endless hours of single player fun to be had. I thoroughly enjoyed the campaign however, I was a bit put off by the “what if” variant that brings a much darker aspect to Injustice 2 than seen in Gods Among Us. Seeing one of my most beloved characters (Superman) effectively lose his mind due to a horrific event in his life was unsettling to say the least. The war that brews within them, regrets of foes not vanquished in the past, justification of killing due to pain and despair…………just is not what I expect from the heroes that have been the backbone of justice and good in the comic world for the majority of my life.

As you progress through the story you find yourself in a situation where you lack the ability to apply any sort of consistency to your fighting style. You are thrown from one character to the next which makes it very hard to become proficient with any. While this approach does allow you to take part in the various elements of the ever-growing conflict that is happening at a variety of locations, it does become an annoyance as no two characters are the same. What works with one won’t get you across the line with the other and the AI doesn’t care about your problems, it simply wants to defeat you. There is an extensive global threat at play which you get to experience from the point of view of the entire cast which is awesome however, frustrating at the same time as you scramble to learn basic combos for yet another character to be able to progress. 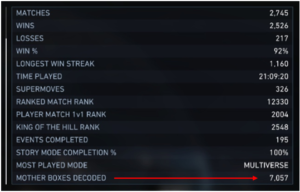 For those of you who love customization, you are really going to enjoy the Multiverse mode. As you progress and level up your characters you will earn a variety of different gear pieces that will allow you to change your character’s appearance significantly, along with earn items that can even allow you to start a match with a stock of meter. You have various load-outs that can be set up before battling online so this allows you to really think about your builds and which ones are best for fighting against certain opponents. The number of hours you can spend trying to get that exact piece that you are after can sometimes be endless which brings me to one gripe that I have. RNG + achievement/trophy should not exist; however you find yourself at the mercy of this as one of the achievements/trophies relies on you getting a certain ability for one of the characters from a random drop. To open over several thousand boxes and still not be able to complete all achievements/trophies because this one ability has not dropped is just ridiculous. I can’t help but feel like there is someone at NetherRealm sitting behind a desk with a cup of coffee having a good chuckle over this. That is an issue that needs to be addressed quickly in an upcoming patch. It’s preposterous to stop your gamers from being able to complete all achievements/trophies due to the inclusion of RNG.

The activities in Multiverse change each day providing a lot of variety and appeal to keep you returning. This also allows you to earn more loot crates by completing these challenges, and other single player actions such as completing tutorials, the story mode and missions.

I have received a large range of feedback when it comes to the stability of online multiplayer in Injustice 2. My own experience has not been a shining one. The peer-to-peer networking makes it impossible for me to join friends on the other side of the world, and sometimes even within my own country (Australia). I will quite often get only half way through an online match to see the framerate almost come to a complete halt, and other matches where my opponent will get clean kicked out of the lobby. This has been a big problem for me and many of my fellow countrymen that I have spoken to however, I do not get same report from Americans connecting with Americans. Your online experience will depend on your location and internet speed, which is never a good thing to have to rely on when purchasing a game that is primarily played online. 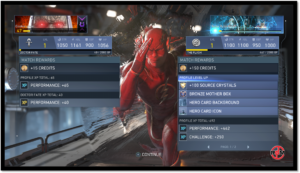 There is however, a delay simulator that allows you to practise as if you are in a laggy lobby, allowing for you to learn how to slow your button input down to a speed that compliments the lag. This is very beneficial and a great well-thought-out addition to the game.

By turning on competitive mode you can level the playing field so that when you are playing against someone who has spent a lot of time levelling up their character and equipping skills, you end up with the base characters again. Your cosmetic changes still stay in place though which means you won’t feel like you put in a lot of effort getting dress for the ball for nothing.

Graphically stunning is the best way I can describe Injustice 2. From the moment you begin the campaign you feel like you are playing a movie. The animations coupled with witty and sometimes cheesy dialogue is an absolute blast to play.

I found myself taking constant screenshots as the action scenes just seemed to get better and better. There was never a moment when I wasn’t in awe of the attention to detail that had been placed on the character designs and environments.

Map transitions, cut-scenes, fighting sequences, they all dance across the screen seamlessly with vibrant colors and eerie backdrops. Quite simply there is nothing that I can fault Injustice 2 for in this regard. Top notch graphics and animations from start to finish.

The replay value in Injustice 2 is through the roof particularly for those who are prepared to learn the characters moves and combos. The Multiverse challenges update as often as every three hours, online play is obviously never-ending for those who really delve into multiplayer, and the variety of game modes means there is something for everyone. As a member of a guild you also have access to the guilds own Multiverse with various events. If these events are completed you open a new Multiverse bringing new challenges and eventually boss fights. There is basically a never-ending supply of options to keep you entertained. 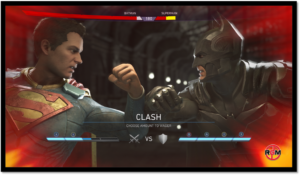 Please see below for my summary and overall score of Injustice 2.