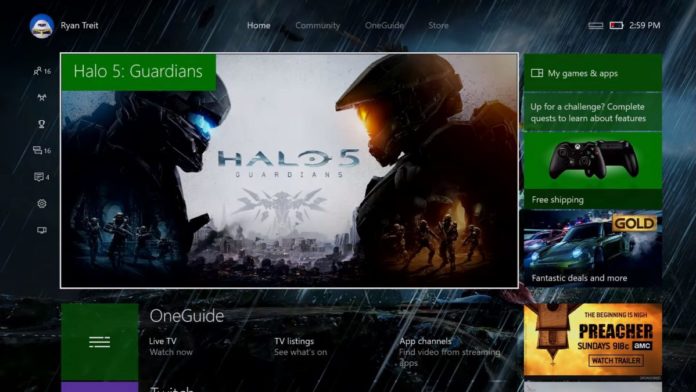 A new update has been rolled out for Xbox One which gives us our first look at some of the content that will be added in the June update. The Xbox One System Software update is currently only available for preview members in the preview beta.

Update 1706.170526-2218 has a bundle of new features, along with various fixes, the most notable being the ability to link your controller to your account allowing for multiple people to be able to sign in at the push of a button when using their controller.

Here’s the rundown of the full contents of the update:

Welcome to 1706 on Xbox One! This month we’re rolling out more fan-requested improvements, new features for Mixer, and much more!

NOTE: Not all planned features for the 1706 update are available at this time.

When a signed out user is selected in the Guide, the e-mail address associated with their account will now display under their profile. When the user is signed in, their account will also display under their profile on Home. This feature is enabled by default for adult accounts, and disabled for child accounts. Adult accounts can disable this feature by navigating to Settings > Account > Sign-in, security & passkey.

You can now invite a friend to combine their game broadcast with yours! Sign in with an account that has an Xbox Live Gold subscription and invite a friend to your party. Once you’ve begun broadcasting your game from the Guide, you’ll be able to select “Invite party to co-stream” from the Party tab. Co-streaming is currently available only to Alpha Insiders, so we’d suggest using the Insider forums to sync up with other Alpha Insiders to test out this feature.

Learn more about co-streaming and other features new to Mixer here, and be sure to complete the “Invite to Co-Stream” Quest and Survey in the Xbox Insiders Hub to provide your feedback!

Signing into your Xbox account can now be done with a click of the Xbox button thanks to the new controller linking feature! You can now link an account to a specific controller by opening the Guide, navigating to Settings > Account > Sign-in, security & passkey and selecting the “This controller signs in…” option followed by “Link controller.” From there, test the feature out for yourself by signing out of your account and then turning your controller off and then back on.

Find more detailed steps and provide your thoughts on this feature by accepting the “Link Your Controller” Quest in the Xbox Insider Hub!

Fixed an issue which could cause distorted sounds and audio glitches when Windows Sonic is enabled.

Fixed issues which could sometimes cause the Skype UWP to crash during use.

Fixed an issue which sometimes caused the virtual keyboard to lose focus (preventing text from being entered).

When initiating a party chat session, the “Connecting” icon may never disappear and the party will fail to connect.

When using Windows Sonic or Dolby Atmos for headphones, you may hear static in the audio. This issue is being investigated by the development team.

Game and app tiles may sometimes not be visible in Games & Apps.