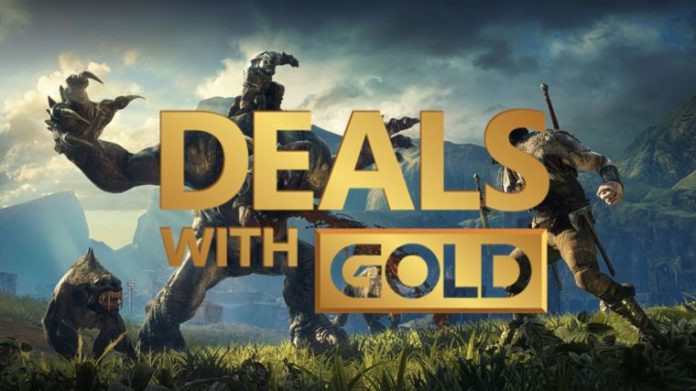 This week’s Deals with Gold over-shadow previous discounts by offering a fan favorite for 80% off. Whilst we all love a good indie game, the deals each week tend to favour those titles on a large scale, so it’s nice to see some of the heavier hitting titles being offered up at a decent discount.

This week’s recommendation required no deliberation what so ever with the Middle-earth: Shadow of Mordor – Game of the Year Edition* being offered at 80% off meaning this week you can purchase it for $4.00 USD as an Xbox Gold member.

Middle-earth: Shadow of Mordor – Game of the Year Edition*

Winner of over 50 “Best of 2014” Awards including Game of the Year, Best Action Game and Most Innovative Game.

More Missions: The Lord of the Hunt, The Bright Lord Story

More Skins: The Dark Ranger, Captain of the Watch

More Warband Missions: Guardians of the Flaming Eye, The Berserks, The Skull Crushers, The Flesh Burners, The Blood Hunters.

Here is the full list of discounted games this week which will end on 18 July: