The demo of Total War: Warhammer II that I played moves the action far away from the Old World of the previous title into the New World, showcasing the jungles of Lustria, and some of the surrounding oceans. There seems to be a much bigger focus on the plot this time, as all four faction are trying to control or tap into the Great Vortex, a massive maelstrom of magical energy. The demo I tried was a playable version of a battle seen before in the Lizardmen cinematic trailer that was released a while ago. In this battle, I commanded a vast army of Lizardmen, tasked with crushing the High Elves who had taken up residence at the Fallen Gates. 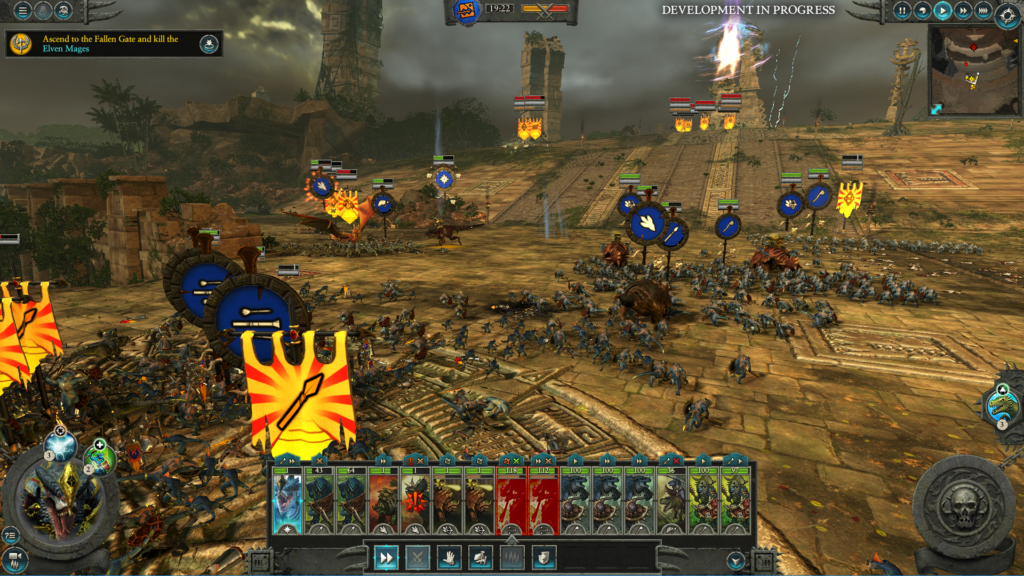 The available forces were quite diverse: Skinks with poisonous darts, heavy Saurus infantry, swift flying Terradons and more. While not much has changed with regards to the controls, there are some major differences with the Lizardmen that make themselves apparent. For starters, their massive dinosaur-like mounts and beasts refuse to rout. Instead, when they hit low health, you lose control over them and they go absolutely berserk, charging whatever unfortunate enemy happens to be in their path.

Another interesting aspect that separates the Lizardmen is their health regeneration. As an example, if you can pull a Carnosaur away from combat for a time, his health will begin to recover.

While Kroq’gar, the leader I had for this demo, does not have a wide variety of magic, there was one very interesting spell. For a sizeable cost out of his power reserves, I could summon a unit of feral Lizardmen beasts. Being able to drop this small impromptu army behind enemy lines wreaks absolute devastation and played well with the Lizardmen’s overall theme.

The High Elves aren’t pushovers however, so the unrelenting force your reptilian army provides will only go so far. Targeting the archers with your Skinks or Terradons is vital, as it allows the larger behemoths in your army to crush their way through the Elven spearmen without potentially suffering a death of a thousand cuts. While I did win the battle, it wasn’t an easy match. 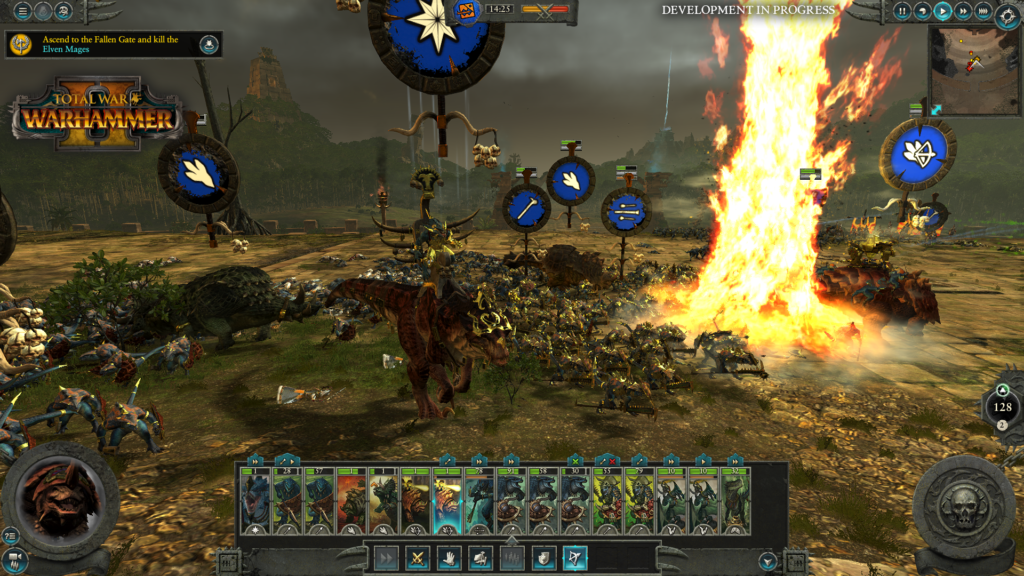 All of the different units and environments looked good, with the jungle aesthetic providing quite a bit of color, very much at odds with the grim look of Total War: Warhammer. I did notice some of the texture suffered from pop in, or appeared to be low quality when viewed at a distance. However, the staff handling the demo emphasized that the game isn’t finished yet, so I’d imagine these issues will be taken care of.

Overall, I think that Total War: Warhammer II is going to make fans of the original extremely happy. The setting, new races and a stronger central plot are all very appealing. I’m also thrilled at the idea of merging this game and the first into one colossal battlefield. This being said, I do think that Sega and Creative Assembly need to be very clear about how the DLC releases will work for this entry, especially with only a handful of races not yet added to the franchise. Total War: Warhammer II releases on September 28th, 2017.