As part of the RGM team from this side of the world, I was fortunate and honored to cover the 9th annual Montreal ComicCon, held from July 7th to 9th at the Palais des Congrès. Last year was a great experience as I met a lot of people, everybody’s happiness was contagious and gaming was a very important part of it. I had high hopes for this year’s edition and I can tell you this right off the bat: I was not disappointed! 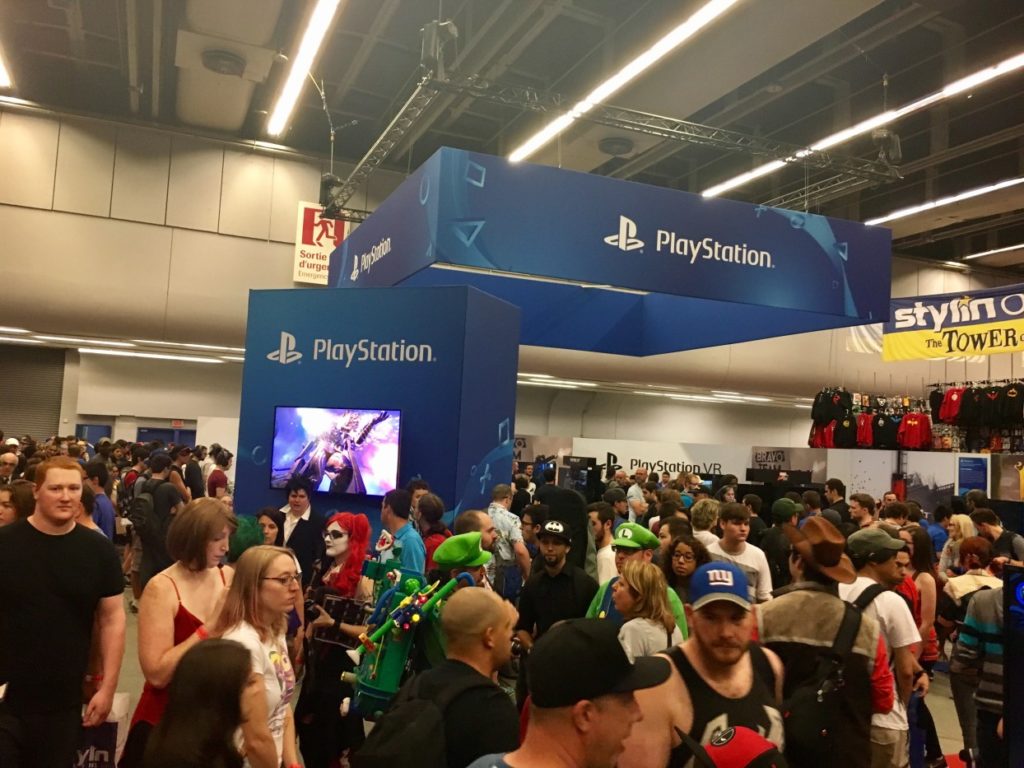 A PlayStation booth worth playing

As a PlayStation writer, I was very excited to go to the PlayStation booth. Last year’s booth was very interesting (where PlayStation VR had a presence before its official launch), so I was definitely curious to see how they could top that. They did it by doing one thing: having even more games. There were quite a few unreleased games that you cannot try anywhere else. Some of them don’t even have a release date yet!

I was able to try Detroit: Become Human from Quantic Dreams ( the creators of Heavy Rain). Matterfall from Housemarque (creators of Resogun) is a game I tried. I also had the chance to play a PlayStation VR game called The Inpatient, a prequel to Until Dawn from Supermassive Games. Call of Duty WWII was playable for the first time in Canada and I was able to play one multiplayer match. There was also Gran Turismo Sport (playable in regular mode from an arcade-cabinet like installation, or in VR), Marvel vs Capcom Infinite, Bravo Team (a PlayStation VR shooter game from Supermassive Games), and Moss (which my colleague really appreciated at E3 2017). There will be upcoming articles for every game I was able to try in the near future. 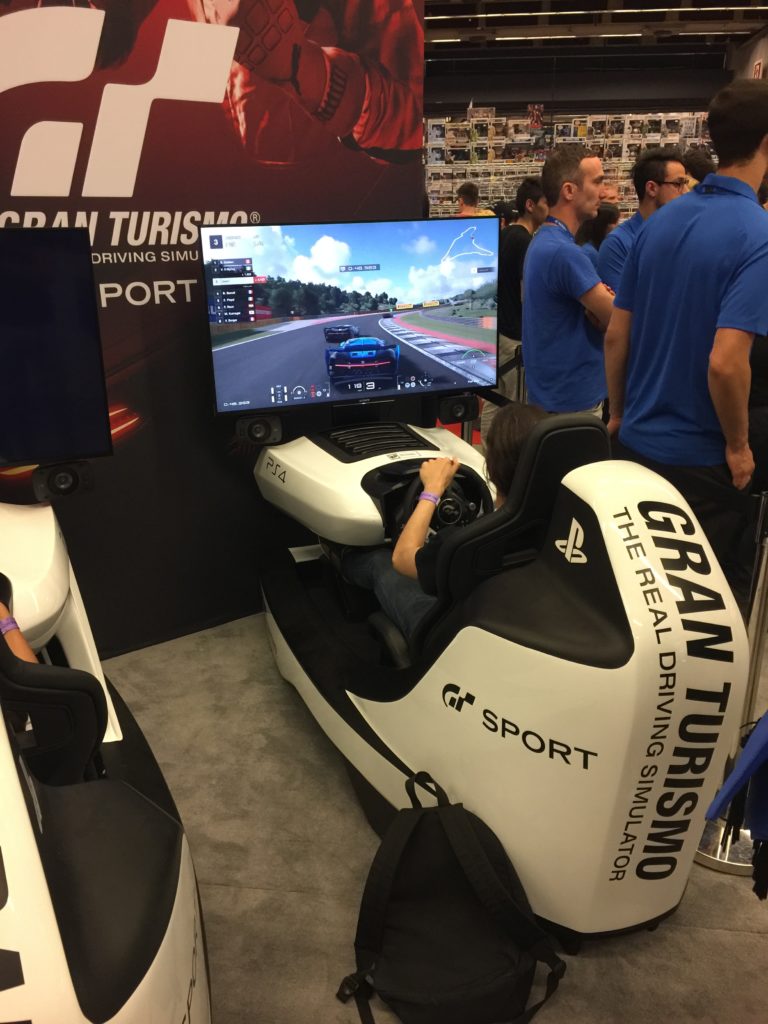 Quite a few celebrities from Doctor Who were present, with David Tennant, Alex Kingston and Freema Agyeman all in attendance. From the nostalgia and love of Castle and Firefly/Serenity, the captain himself, Nathan Fillion was also in town. His panel (a Q&A session) is one of the only ones I was able to attend. He was a lot of fun, very funny and open like his characters. The only sad part: there were no mentions whatsoever of his contribution to video games. There were no mentions of Buck (from the Halo franchise) or Cayde-6 (from the Destiny franchise). 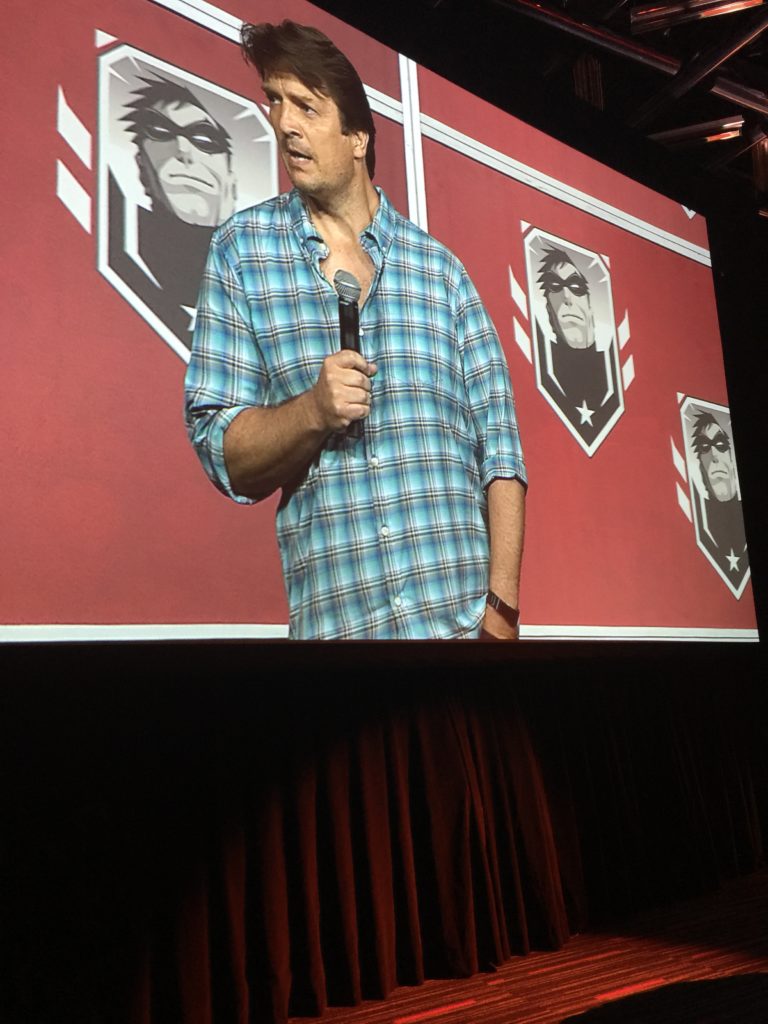 After his presence at the ComicCon two years ago, Charles Martinet was back. He is the man behind the voice of every masculine voice in a Mario game, from Mario to Waluigi. If you haven’t seen any interviews with the man, you MUST change that. He’s a VERY funny guy. He also loves his job like crazy (which he has done for more than two decades). Of course, people asked questions about Super Mario Odyssey. He only answered with “The game is just fabulous, and I can’t wait for you all to play it!” I was not expecting anything else, the guy must have a crazy big Non-Disclosure Agreement (NDA) to respect. 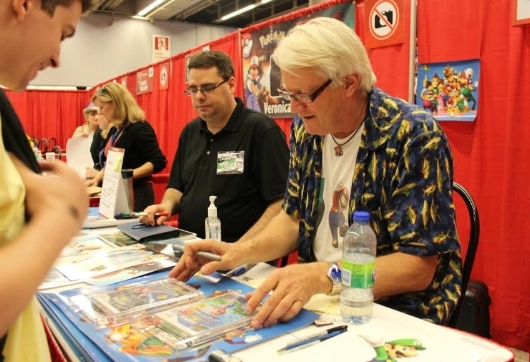 A very interesting celebrity appearance at the convention was meeting the entire DeadSec crew from last year’s hit from Ubisoft, Watch Dogs 2. Ruffin Prentiss (who played Marcus), Shawn Baichoo (who played Wrench), Jonathan Dubsky (who played Josh) and John Tench (who played T-Bone) were all present, meeting and talking with fans. They also held a Q&A session about their experience working on the game. Their camaraderie is real and they are really good friends in real life. Their view was really interesting to hear, especially Jonathan, who struck a chord with me when he talked about how seriously he took the responsibility of playing someone suffering from Asperger’s Syndrome. It was an honor shaking their hands and talking to them and I look forward to following everyone’s upcoming projects. 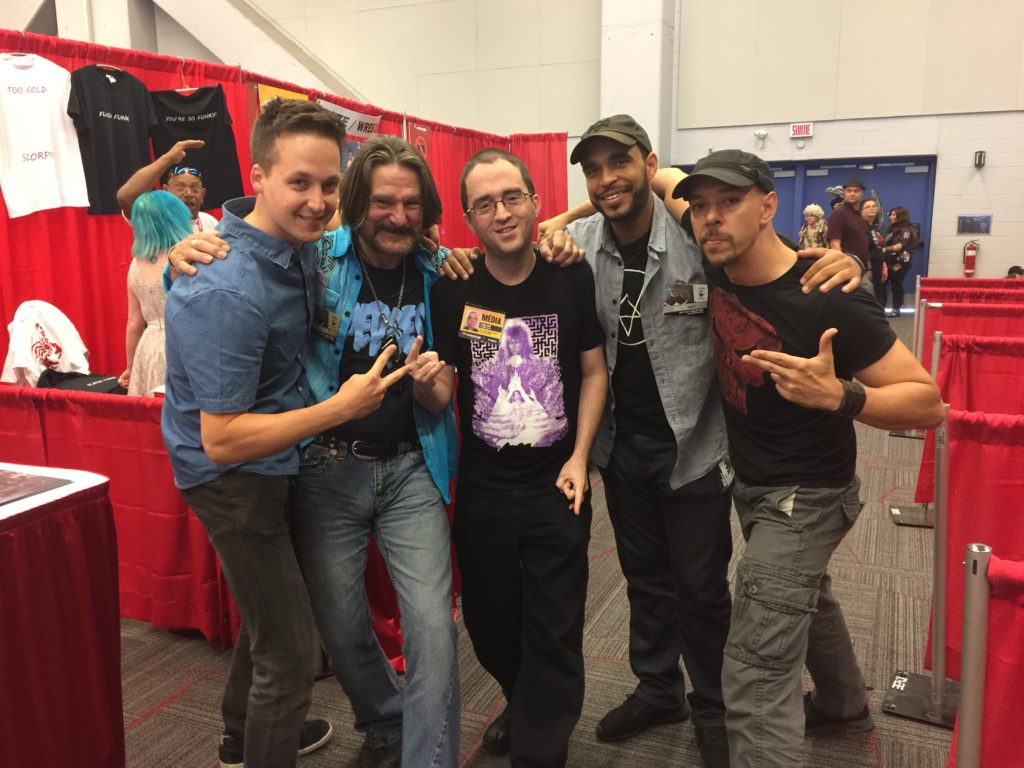 Indie Games are important too

There was only one extra section of the convention where I really spent a lot of time: the Indie Game Zone. A dedicated section where dozens of indie developers from the province of Quebec were presenting their latest projects. Some were very early prototypes, but others were just about to get their official release. There were some high-profile games in here. 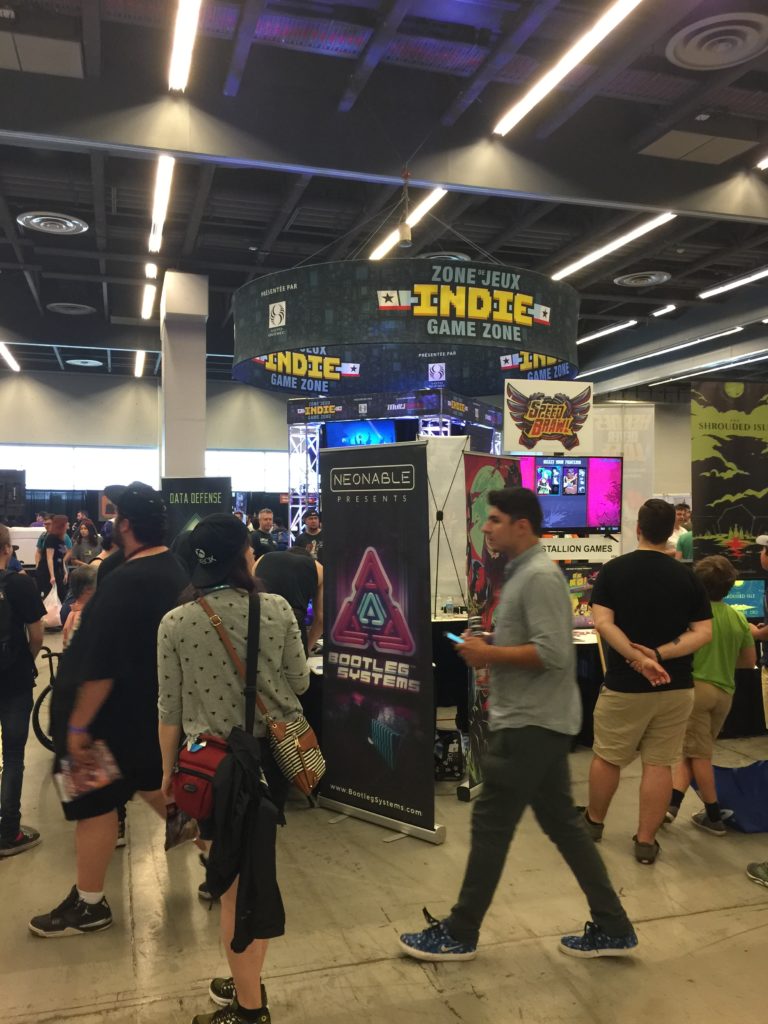 Cardboard Utopia presented their game that will be released tomorrow (July 18th 2017) on console and PC called Children of Zodiarcs, a tactical RPG which is an approved game under the Square Enix Collective.  Borealys Games presented their game called Mages of Mystralia, which released on PC two months ago successfully, with a console release coming soon.

Another mention that I need to give is to Sundered, a roguelike game from a studio called Thunder Lotus Games (creators of Jotun), which was successfully funded in Kickstarter, and now will get released on PS4 and PC (GOG and Steam) on July 28th. I also need to talk about A.N.N.E., a game that was described as a Metroidvania meets Gradius encounter, using 8-bit and 16-bit aesthetics, which also benefited from a successful Kickstarter campaign. The game also received a mention for being one of the best indie games at the 2016 Tokyo Game Show. You can expect impressions on all those games in the near future. 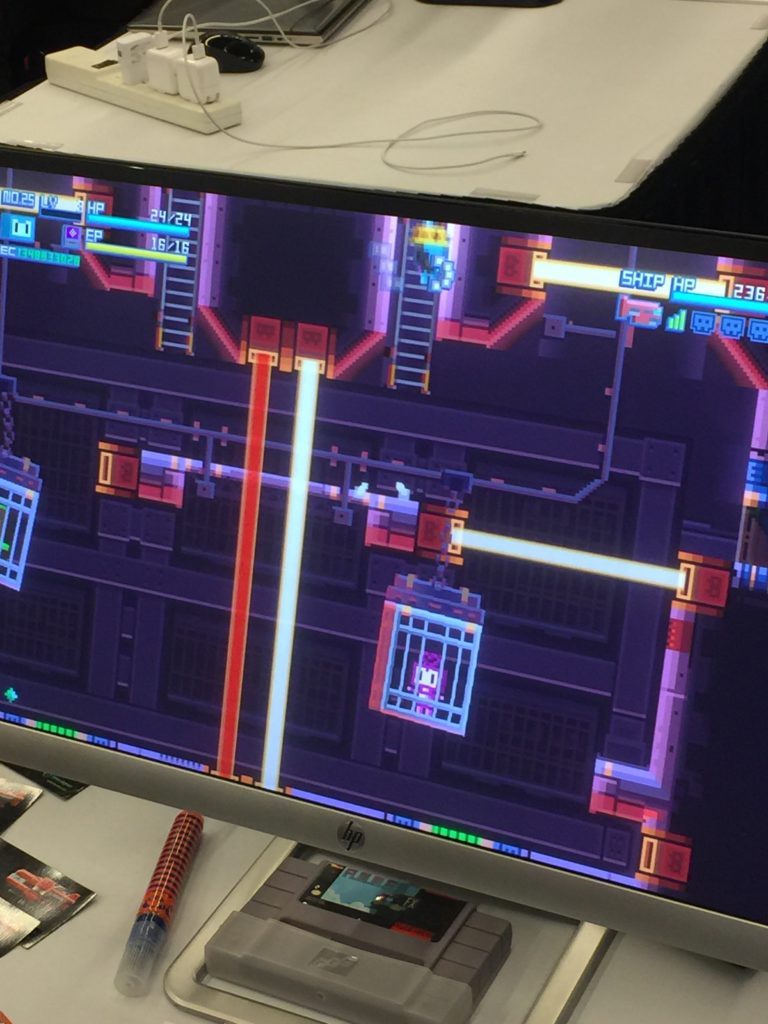 A ComicCon without cosplay is not a ComicCon

Cosplay has always been a key component of those conventions. I am always in awe of seeing the talent that people have when they are passionate about crafting their own costumes. I have seen all kinds, from video games to pop culture, from movie icons to anime. Here are some of the highlights from my weekend.

This year’s convention was a great event. With next year being their 10th anniversary, I’m sure they will want to top that. As I said earlier, you can expect in the near future many articles in which I will be talking about games I have played during the convention. If you have any questions, just fire back in the comments, and I’ll do my best to answer them.