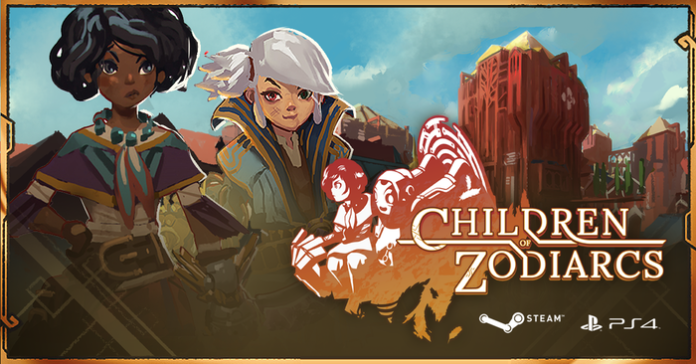 When I walked around the Indie Games Zone of the 2017 Montreal ComicCon, I arrived at a booth held by a developer called Cardboard Utopia, a name I hadn’t heard before. When I saw the title of the game, I was very happy, because I had read about it in a Square Enix newsletter I received a while ago. I loved what I saw and I’m eager to share the details. Here are my Children of Zodiarcs impressions. 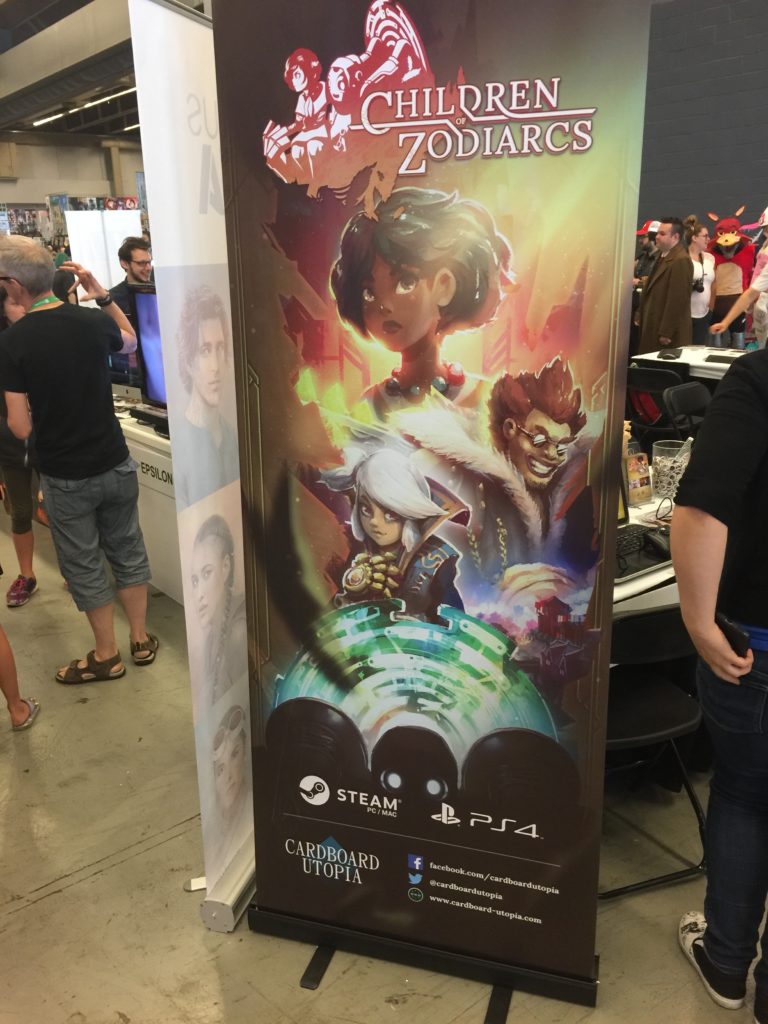 When I first saw someone playing it, I was somewhat confused, because I was seeing elements of tactical RPGs like Final Fantasy Tactics and Disgaea but with card game elements and dice rolling. So I spent some time talking with Andrée Boutin, who works on the Business, Operations and Communications side of the company. She explained the basics of the game to me and I discovered that this game has a special twist on the tactical RPG genre that I’ve never seen before. 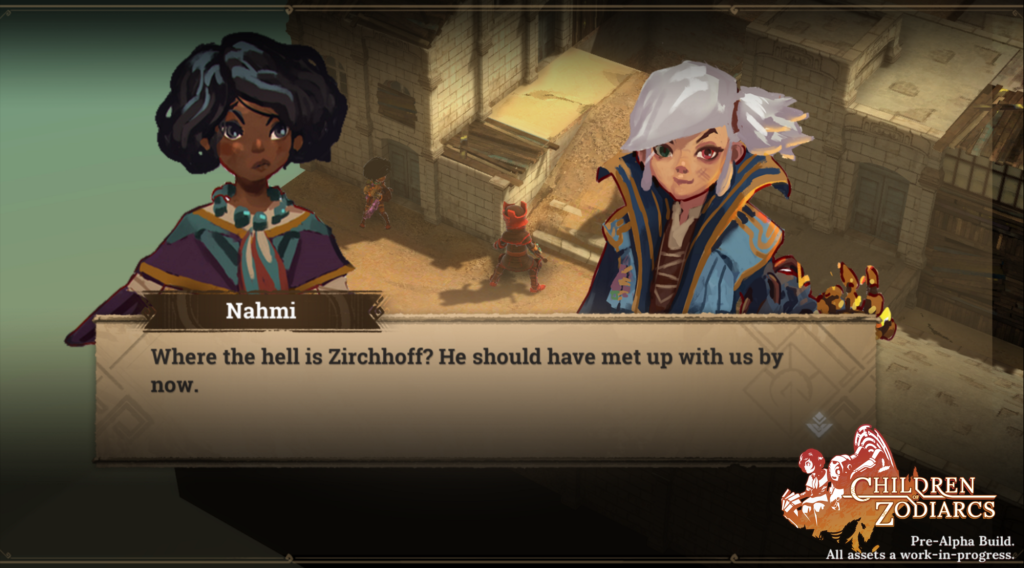 The gameplay has some roots in the Final Fantasy Tactics genre with its art style and way it tells the story. There is a map/HUD in which you will have missions to follow, some mandatory to advance the story and some extra ones to allow you to grind, level up, etc. The story is told with text windows like the one you see in the image above. The voice acting doesn’t strike me as either horrible or incredible, but the fully orchestrated soundtrack is awesome. The presentation overall is very good. In terms of the actual story, I didn’t see a lot of it in the demo however, it seems to be well summarized in the press release for the game:

The game tells the story of a band of professional thieves on the hunt for an ancient relic. Their adventure sees them infiltrating the private chambers of one of the realm’s corrupt nobles, alerting Toran’s authorities and sending them on the run to stay alive.

It is simple but it seems to be doing the job. I was told not to expect at 60+ hours like a Square Enix or NIS game, but a very decent length around the 10 hours mark. I don’t mind this at all, as long as the gameplay mechanics are interesting, the most important aspect of a tactical RPG in my eyes. Let’s take a look at what it consists of. 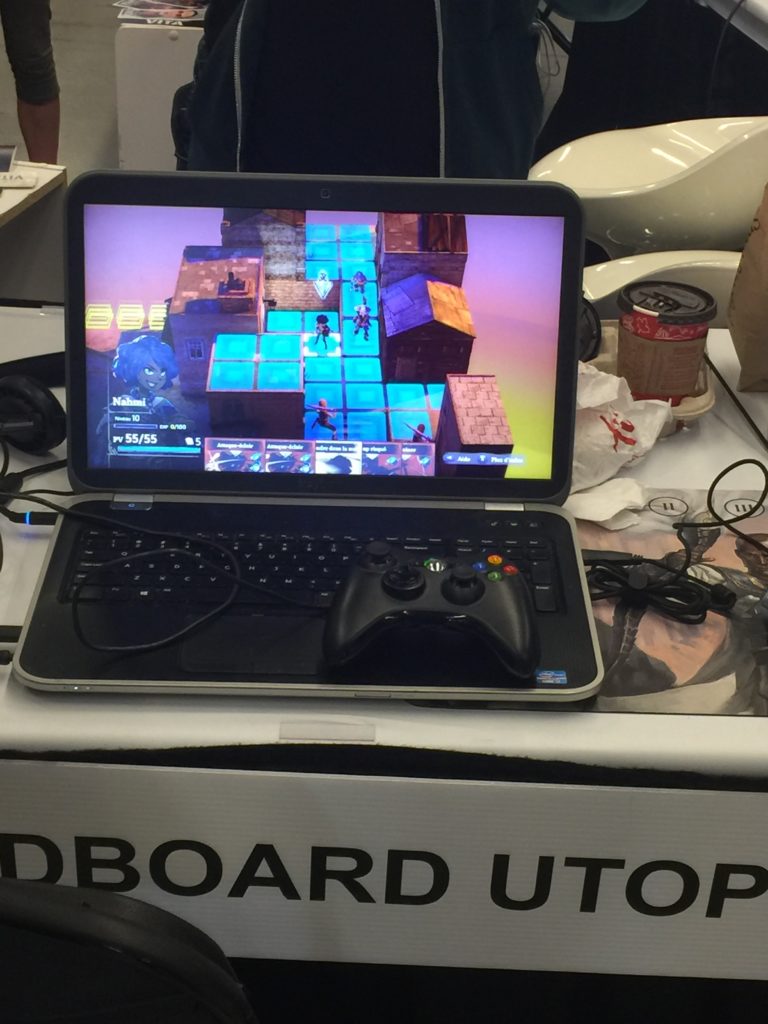 Each battle has its own set of objectives. During my hand-on time with it, it was simple: kill all enemies. The battles are turn-based. Each action consists of three steps: movement, choice of action with a card, then rolling the dice. I won’t spend much time on the movement step, because it’s really straightforward: each character has a range it can walk to at each turn (as seen in the image above). You select where to go. We’ve seen this in tons of games.

Actions through cards and dice 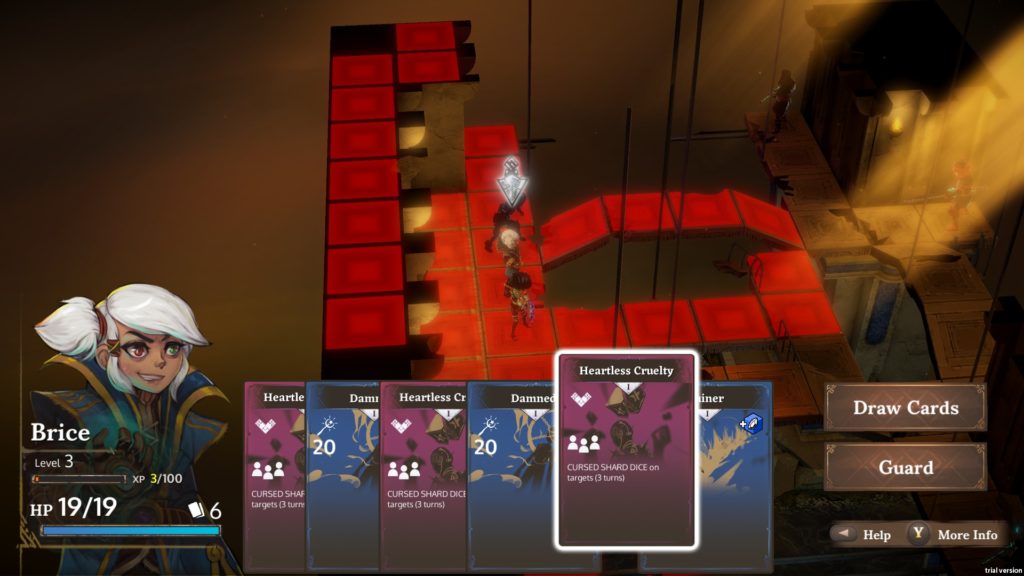 For the choice of actions, it is done through a hand of cards. We possess a deck of cards, and we have a hand with some of them to start the battle with. Each represent different types of actions to perform, from attacks to spell to status ailments. Everyone has its own range of effect. There are multiple levels of cards, as well as indicators on the cards of some figures corresponding to symbols found on the dice. If the player is able to roll the matching symbols, there are special effects that can occur, from higher damage to healing. 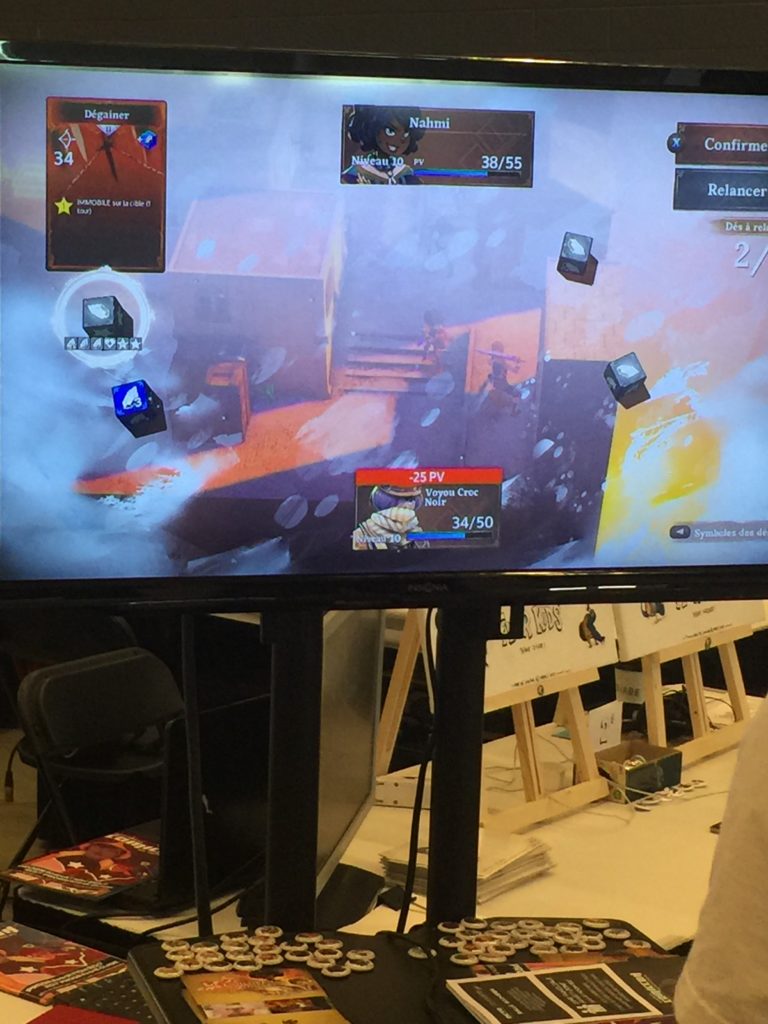 Finally, there needs to be a dice roll, which will determine the effectiveness of the selected action. The amount of dice is determined by your level and progression, and are equipped before a battle.  Each symbol on them has its importance, from healing factors (the blue heart), to power of the attack or unlocking special effects from the action (as mentioned before, which are indicated on the card).  After the three steps, the action happens before your eyes. There are experience points gained for every successful actions and leveling up is done instantly during battle. 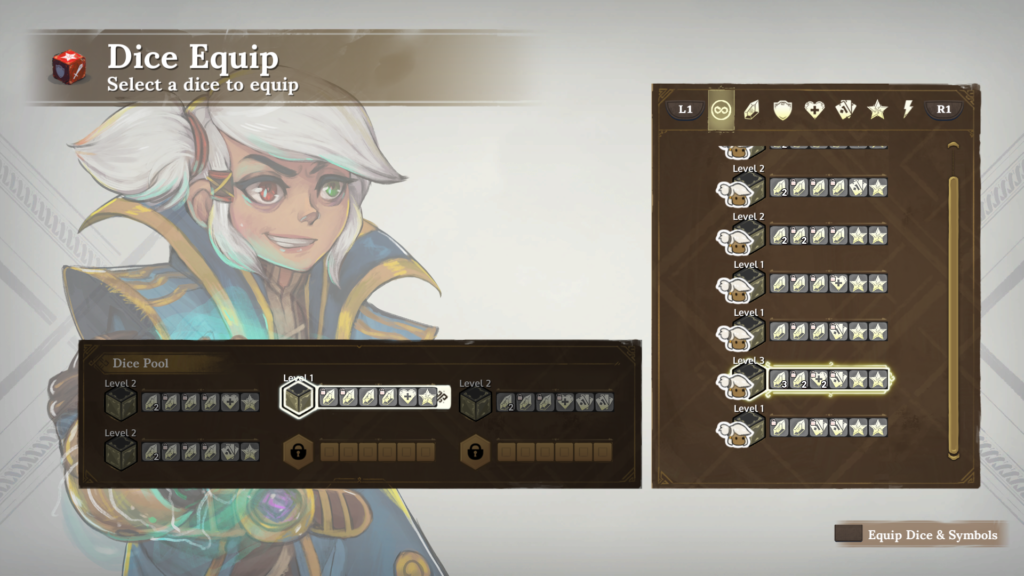 Each character can perform only one move, or stay in defense mode. Your turn finishes when everyone has completed its action. After, the enemy will execute its move. Then it’s back to you.  The result of this combination of three steps is really making you think about how to coordinate everyone and manage your movements and your cards. There is some serious deepness in the gameplay. For people that really wants to push things even further, the customization can go even further. 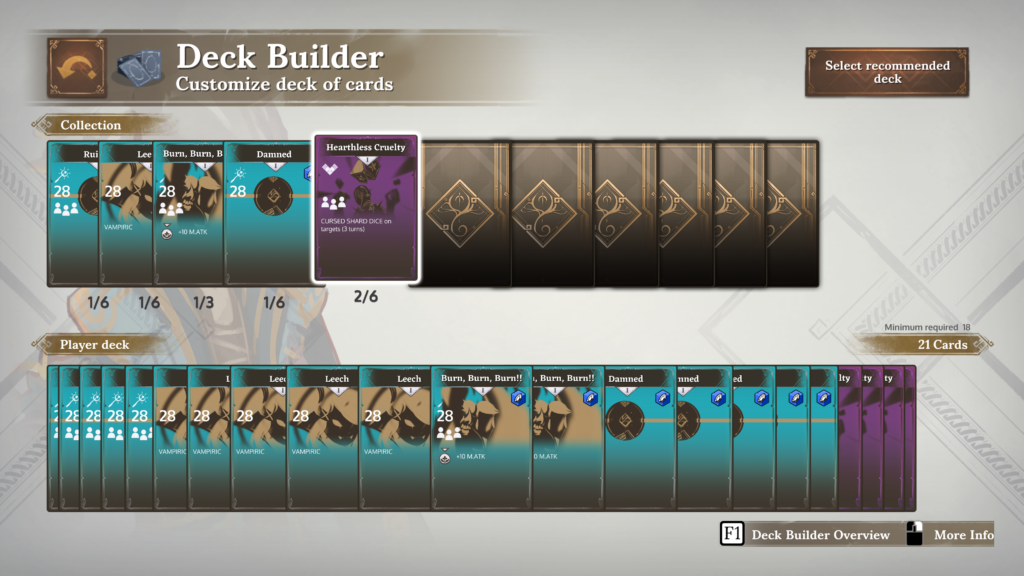 For people that wants to go really deep into the mechanics, you can go as far as forging dice. It can be done using resources that you collect through your battles.  You can also build your own deck of cards, in the same vein as Hearthstone allows you to do so. The player is not forced to do everything by himself manually.  Both option gives you the possibility of letting the intelligence of the game do it for you and show you what are the best actions that you can do according to your progression and the resources you possess. I was told that those options are mostly for advanced players are not mandatory to succeed finishing the game. 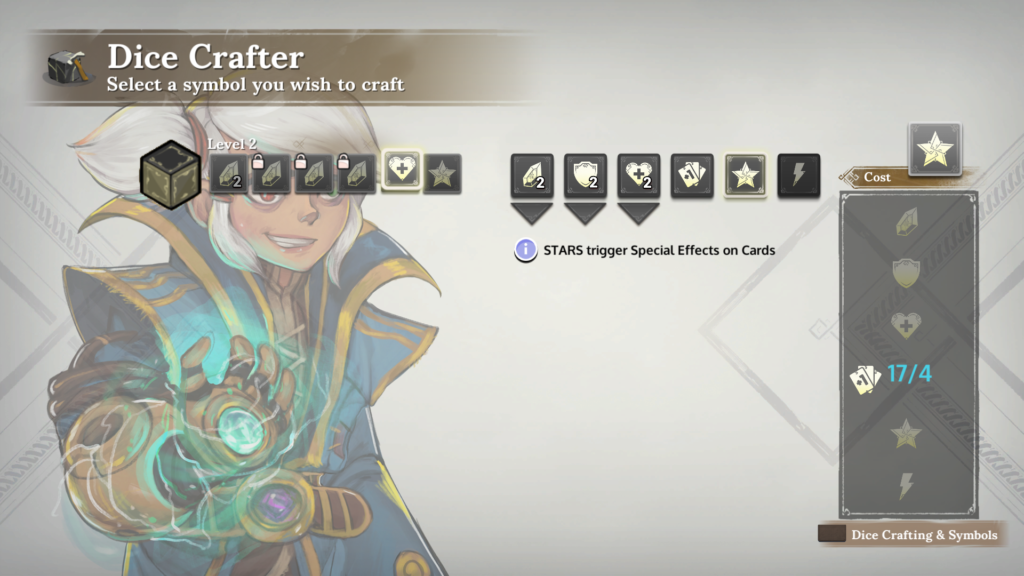 A game worth the investment

I spent about an hour with the game and was happy to see an indie developer from my part of the world tackling this type of genre. The company really brings its own twist and I can’t wait to play the full game.

So, what do you think about this game? Does it interest you? Did you already purchase it? Let us know in the comments.