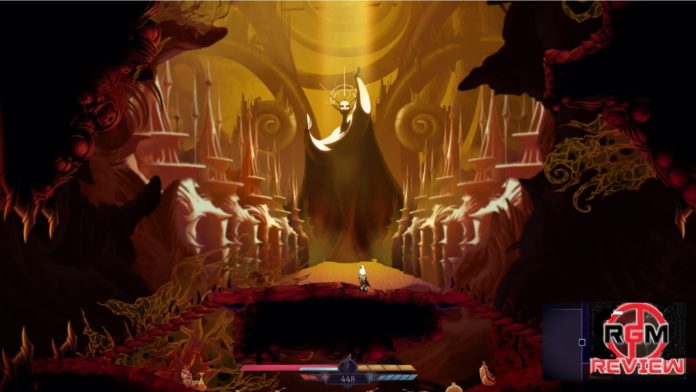 In recent years, the best Metroidvania games focus in on two central elements and fine tune them as much as possible. Those two elements consist of gameplay flow and a distinct art style. Titles like Ori and the Blind Forest and Hollow Knight nailed both aspects, allowing them to become excellent examples of the Metroidvania sub-genre. With Sundered, developer Thunder Lotus Games’s latest has joined that list and is a great representation of how to do this style of game right. Outside of the occasional technical issue and some harsh difficulty spikes, Sundered is an atmospheric, beautifully animated, and replayable experience that remains largely entertaining throughout its many hours worth of gameplay.

Sundered may be light in modes, but its campaign mode offers up plenty of depth and overall play time to keep players feeling like they’ve got their money’s worth. The story centers around a human named Eshe who is trapped in a terrifying (and constantly changing) world full of monsters and horrors. In order to survive, they may have to abandon their humanity and give into the evils that lurk in the shadows. With the help of a foreboding and mysterious voice, you control Eshe and help her traverse the ever-changing game map.

The focus of the campaign is primarily on the gameplay, moral choices on the players part, and occasional story-telling sections. There’s little story to speak of here, but this doesn’t end up being an issue thanks to the world that’s established in Sundered. It’s an interesting world, but the game’s lack of exposition and story dumps allowed gameplay flow to be consistently satisfactory. Besides, the various ways in which a certain “inner monologue” would interact and react to your decisions served as enough of a story highlight.

There aren’t any characters to meet or interact with outside of the game’s plentiful enemies. This helps build up the isolation factor and lets Eshe’s journey to the light (or darkness) feel authentic and engaging. If it was any other style of game, the reduced story would’ve been a definite issue. Thankfully, Sundered utilizes its distinctly unpredictable world and morality questions to ensure plenty of mental stimulants throughout the game’s 12-15 campaign.

At a base level, Sundered‘s central gameplay doesn’t stray too far from typical Metroidvania fare. You move around in a map separated by tiles of varying sizes and explore each of them until you find your destination. Along the way, you’ll fight enemies using a single attack button while simultaneously dodging and jumping to avoid enemy hits. However, Thunder Lotus did put in some tweaks and gameplay twists so that combat and exploration feels fresh for longer.

The skill tree is the most important aspect here as it gives purpose to every fight, random crate, and tile on the map. The possibility of there being shards for players to collect for upgrades is extremely enticing. During tougher enemy encounters, I’ve fought the urge to run away because the loot possibilities were too alluring to miss. Along with that, the gradual way that Eshe would improve and get stronger made gameplay feel increasingly satisfying. The moments where you revisit areas that gave you trouble before with your new upgrades were especially enjoyable.

The open story choices was a surprise inclusion that I didn’t know about initially were also well-appreciated. They allowed moments that were pretty standard in other games to become moral dilemmas. Do you allow the foreboding evil to consume you if it means you’ll be more powerful? Should you resist the urge and take your chances elsewhere? It was an interesting conundrum that felt very fresh in this game style.

The procedurally-generated layouts added some unpredictability, albeit in a somewhat limited fashion. Since certain destinations on the map couldn’t be altered, most areas remained mostly unchanged. The occasional confusion that would ensue when I revisit an area that’s now covered in thorns when it was clear previously did force me to think on my feet, so it was still appreciated. 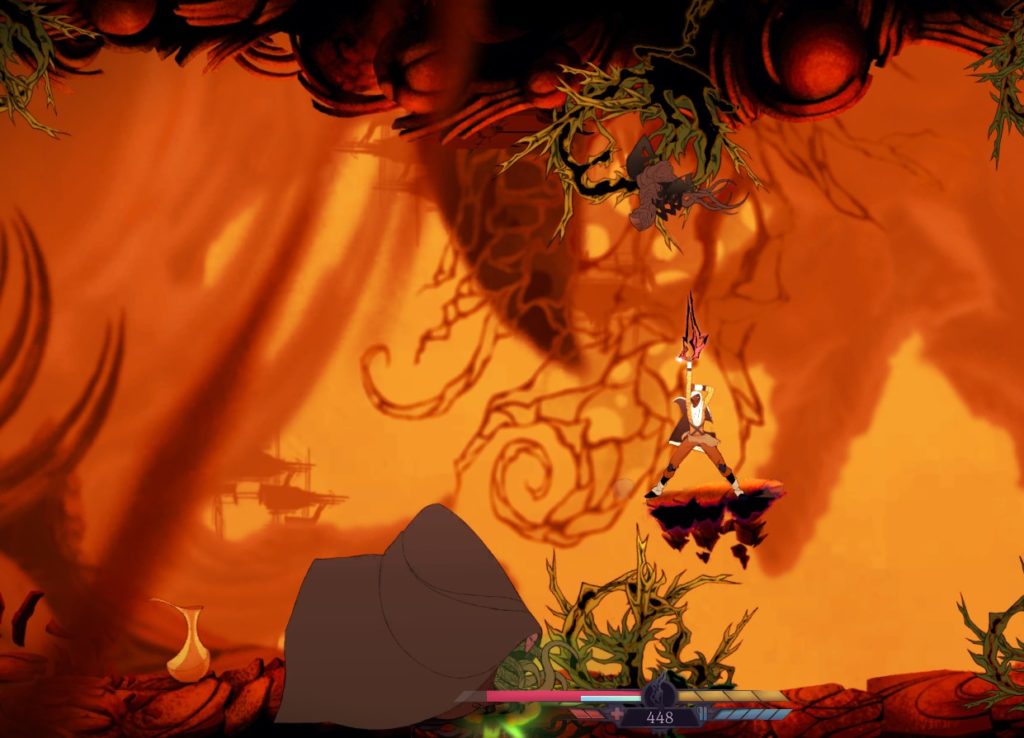 If there’s one thing you’ll know quite well by the end of the campaign, it’s each enemy’s attack/movement pattern. Many of your clashes with the various enemy types come in horde battles where a bunch of enemies spawn altogether. Not only that, but they’ll spawn completely at random, so there’s no telling when they’re coming. This forced me to remain vigilant and stay prepared for when a swarm may appear. That being said, this did lead to some harsh difficulty spikes on Hard mode, leading to plenty of frustration. You’d be attacking at quickly as possible while dodging oncoming attacks, and the enemies would seem to spawn endlessly. It felt less like an intense last stand and more like a creative way of saying “keep it moving.”

In addition, once the enemies on-screen reached 20+, I experienced consistent lagging and slowdown. It wouldn’t have been as much of an issue if I didn’t have to make multiple precise jumps. This caused numerous undeserved deaths and even some complete map refreshes. Other than that, the game ran very smoothly and game flow stayed at a brisk pace.

My favorite component of Sundered has to be its visual style. The character models and gorgeous backgrounds set the stage for much of my adventure and made exploration a joy. The devs utilize their beautiful hand-drawn scenes and models to great effect here as each moment is stunning to behold. The cartoon explosions mid-battle, the eye-catching use of color in both the backgrounds and the enemies, every bit of it heightens the game beyond what it would’ve been with a standard art design.

The world feels unique and intricate, with brilliant use of color and background detail. This also helped distract me from certain sections of the map that may have looked too samey otherwise. The character animation between enemies and Eshe was flawless too. There was never a stutter or glitch that I could see, making immersion quite natural. All in all, I don’t have a negative to say about this game’s visuals. Amazing art design. 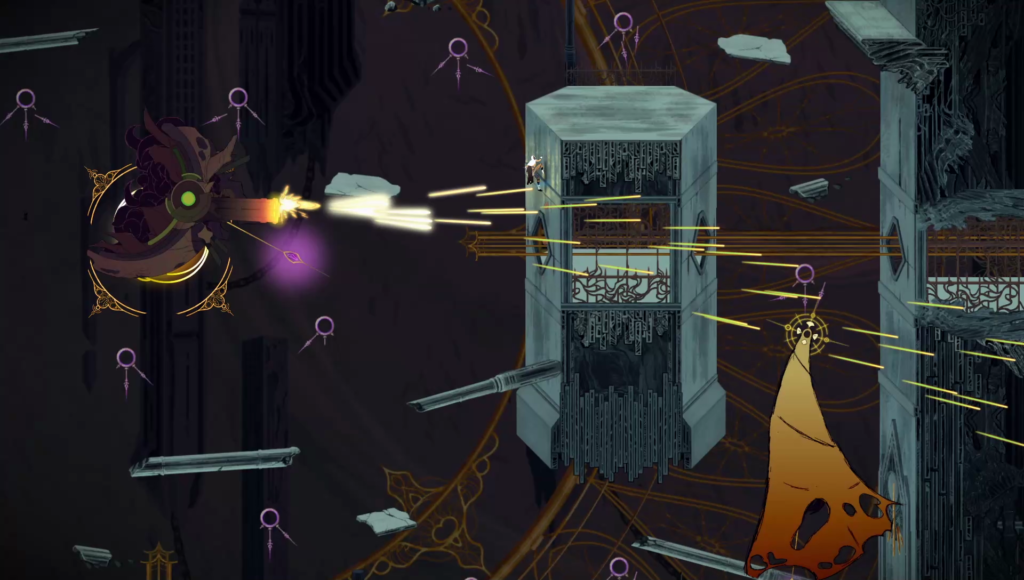 The game’s soundtrack was unfortunately the weakest part of the experience. The music present definitely didn’t detract or take away from the experience by any means. Actually, it complemented the settings well, furthering the establishment of the game’s atmosphere. That’s all it ever really did though. The music didn’t heighten the experience for me, rather it just kind of went along with it. Overall, solid atmospheric tones that went with the visuals, but never became more than just background music. 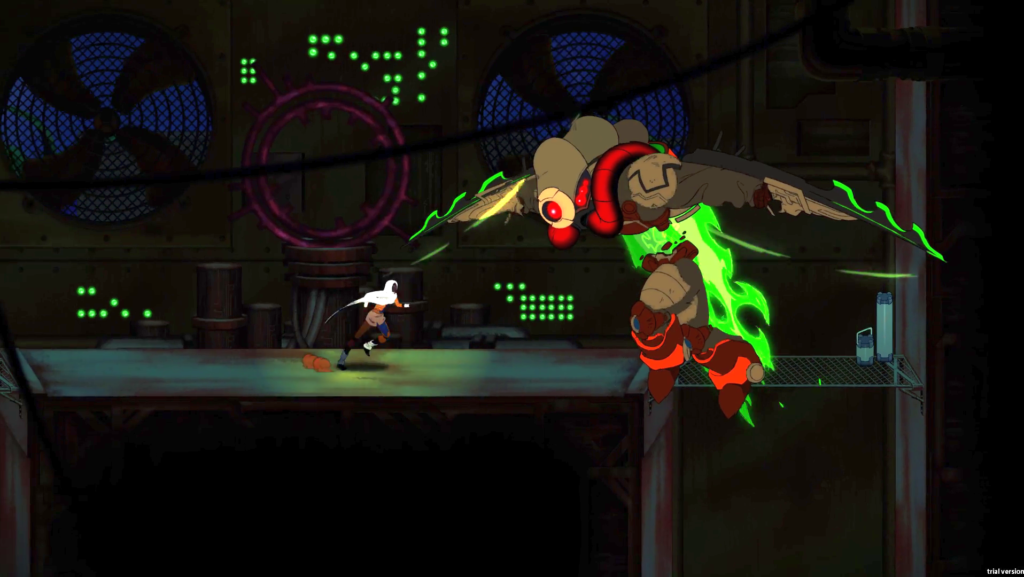 I didn’t expect it going in, but Sundered is a highly replayable experience. With the branching decision options, multiple endings, and the open skill tree, players could experiment quite a bit in multiple playthroughs. Mixed in with the gorgeous visuals that never get old and the constantly changing map layouts, this is a game that certainly earns your money through plentiful future replay sessions. All of that mixed with the highly non-linear structure of progress within the game, and you’ve got yourself something that’ll never play the same way twice.

Be sure to check down below for my final score!