When co-founder Ahmed Omar contacted RGM about the ALL Controller back in March, I was impressed and skeptical about the idea of a gamepad that I could use across all my devices.

In fact, they claimed that it would work on any Xbox (Xbox 360 and Xbox One), PlayStation (PS3 and PS4), PC (Windows, Linux, and even old DOS games), Mac, iOS, Android.

With all the proprietary wireless protocols and sheer number of target devices, I thought, “There’s no way this is going to work.” Well, I was wrong.

Since they contacted us, they now officially support all the previously mentioned devices including Apple TV, Android TV, Steam games, VR, Retro Gaming, Nvidia Shield and they are currently working on adding support for the Nintendo Wii, Wii U, and Switch. 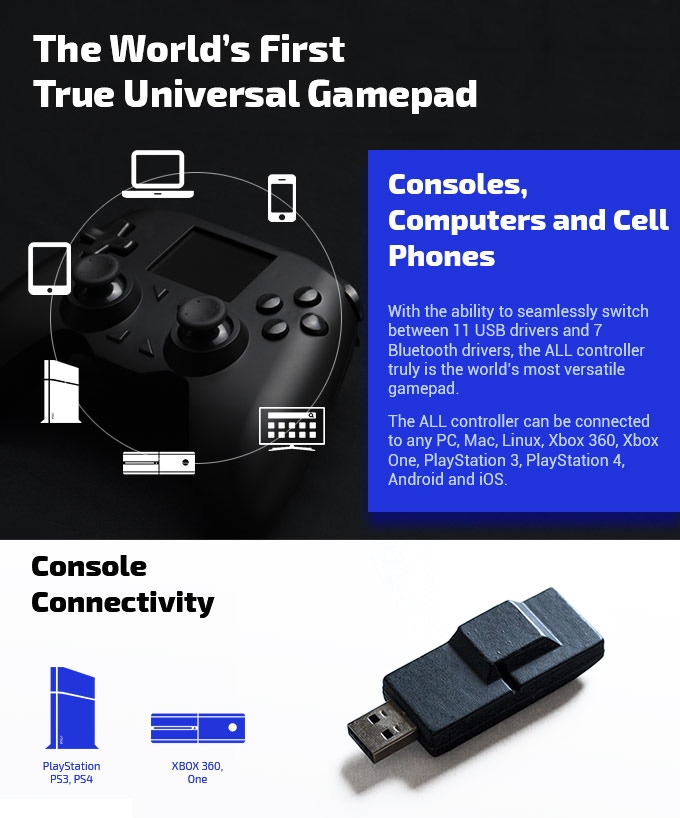 So how does this all work?

A talented team of gamers and engineers with extensive backgrounds in designing and building gaming peripherals (some of whom have worked with Polycom, Flextronics, and Microsoft) have managed to cram all the hardware needed to connect to over 10 devices. This device has all the drivers you could possibly need to connect to all the platforms they support along with the ability for firmware updates for future devices.

This isn’t just a pipedream, they have actual video proof on their Kickstarter page that shows their prototype being used with a PS3, PS4, Xbox 360 and Xbox One (see below).

Customization with this device is pretty impressive as well. You can configure and store up to 16 different profiles depending on the games you play. Analog deadzone, macros, combos, joystick sensitivity can all be fine tuned.

While this does raise concerns about cheating online, the creators have stated that, “The ALL Controller was not meant to help people cheat. There are some games that will not permit you to use macros and combos, it is your responsibility to know the rules and adhere to them. The ALL Controller has been used to play multiple games online without any issues or bans.”

This is an extremely ambitious project and we’re impressed with the amount of R&D that has gone into this device, as well as hoping the gaming community supports this peripheral. If you’d like to back this project, be sure to head to their Kickstarter page. If you’d like more information about the controller they have more information on their FAQ page.

We wish the team the best of luck in bringing this product to the retail market!