I was late to the party with this game, so to speak. While Seasons after Fall first released on Steam back in 2016 and hit consoles earlier this year, it was only recently that I was able to pick up a controller and check it out. I’m certainly sorry that I didn’t do so earlier, as this game provides a calming respite from the hectic nature of life and other, far more frenetic games.

You play as a young fox who has been bonded to a seed in a mystical forest. After this bonding, you are tasked with repairing the balance of the forest. It doesn’t get much more complicated than that, apart from a handful of minor twists in how you accomplish your goal. With that said however, the way the story is told is actually quite encouraging. At practically every point of accomplishment, the narrator explains how joyful she is at what you’ve done, or praising you for how much closer you are getting to achieving the overall goal. 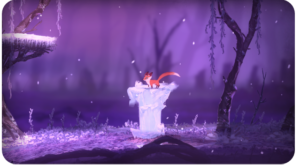 The story ultimately serves simply as a plot device to explore the powers of the seasons and this mystical world. There’s no major point to it beyond that or the aforementioned fashion in which it encourages and uplifts the player.

The gameplay is deceptively simple. Playing as the young fox, there’s never anything extreme really expected of you. Throughout your journey, you’ll engage in some light platforming, solving puzzles as you make your way forward. As the game progresses, you unlock the power to control each of the four seasons. You’ll have to swap through different seasons in order to progress. 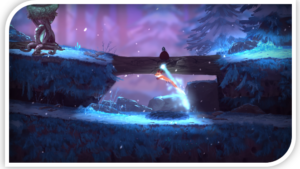 These combinations are fun and usually take a moment to figure out. With that said however, they never get truly complicated, rather hitting a certain level of complexity then staying there for the rest of the game. What you see a short ways in is, unfortunately, what you get from then on. I also sometime encountered some minor glitches when trying to access the radial menu of seasons, though this wasn’t a huge issue.

Seasons after Fall has a simple art style that nonetheless conveys a great range of depth and warmth. The environments are all lush and fertile, with scurrying creatures, bright lights and colorful caves. 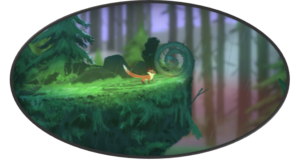 The juxtaposition of different seasons and the way every single area can be altered on a whim is certainly incredible. It’s truly wondrous to watch a frozen winter landscape become a bright fall forest before your eyes. Even in the background, attention is paid to small details you can’t interact with, like the number of bugs buzzing around shifting with the seasons.

If you happen to be an achievement or trophy hunter, there are a few here that aren’t particularly easy to get. Other than that, the only real reason to replay this game would, interestingly enough, be the same reason you’d play it in the first place: to take time away from other games and calm yourself. I can see this as being particularly helpful if you deal with anxiety or stress, as every facet of the game comes together to help you relax.

Please see below for my summary and overall score of Seasons after Fall.