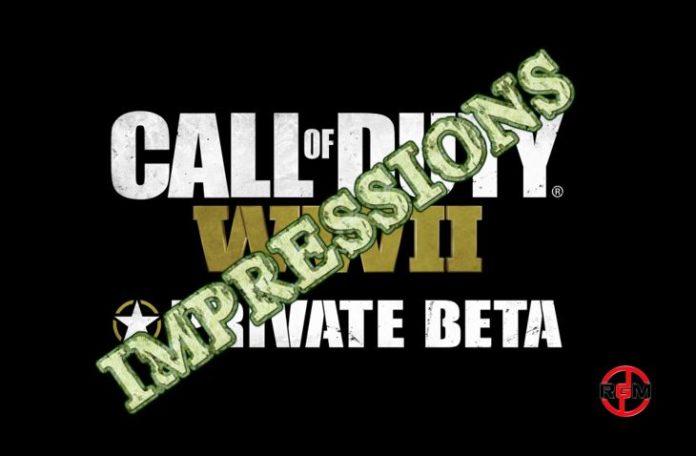 Being aware that many won’t have the opportunity to test out the private beta for Call of Duty: WWII (CoDWWII) prior to its full release in November, I have pulled together my impressions for you to provide a perspective from the eyes of a Call of Duty (CoD) veteran.

Going “back to the roots” of the CoD franchise was a big risk for Sledgehammer Games however, a risk I feel they couldn’t afford to not take. The community has been very vocal about their distaste for the futuristic settings the past three installments in the franchise have adopted, and a call for a more “boots on the ground” centric return to form has been a resounding theme across the board.

So how did Sledgehammer fair with this mammoth task? Let’s find out…..

The beta is restricted to three maps initially with a fourth added towards the end, all on the smaller size, consisting of a maze like layout with more corners to camp in than I could count. There are long lines of sight, perfect for the Bob Lee Swaggers out there, and a primarily dual layered layout that reinforces a return to a more realistic style combat system. 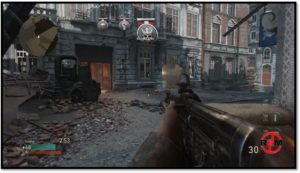 This style of layout promotes fast-paced game-play, forcing you to advance or get bored. This doesn’t stop the campers though, they have not lost their will to sit in the shadows even after all these years. May I make a suggestion? If that’s you, sitting in a corner waiting for the unsuspecting to run past….. IT’S A BETA! GET OUT OF THE CORNER! For the love of all that’s good in Call of Duty please run around the bleeping map, even just for a minute.

Ok, moving along. Overall the maps feel too crammed. The doorways have thankfully been made large enough that if two people try to go through them you don’t bottleneck each other however, there never seems to be a time when you can’t get shot from 10 different locations unless you are head glitching behind a barrel or laying on the ground in the shadows. I fear this will promote camping – I hope I am wrong.

Overall the maps will take quite sometime to learn the lay of along with learning all the calls associated with each quadrant of the map. This isn’t a negative, more just an observation.

For those of you who found the leveling up system like that of Black Ops 3 a tad overwhelming, you will be pleased to see that Sledgehammer paid attention to their colleagues in that regard and have taken the opposite approach. The entire system has been greatly simplified with a Battlefieldesque class system replacing older systems such as ‘pick 10’.

This allows for you to select a class, or ‘Division’, that suits your game-play style (Infantry, Armored, Airborne, Mountain and Expeditionary) and from there spend time leveling up this class to be able to unlock perks/attachments. 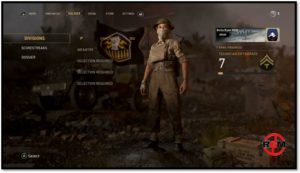 Well, almost the entire system has been simplified. For some reason the very sensible list that would appear on the RHS telling you who you are partied up with, enabling you to press ‘Y’ to invite more, has been abolished. This is now buried in an interaction menu that’s accessed with bumpers and scrolled through with the D-pad. Makes – No – Sense!

The absence of wall-running and jet-packs leaves room for the good old-fashioned dolphin dive to return, albeit a tad lame as it’s not very useful. Your character sort of trips over its own feet and faceplants it as opposed to a proper dolphin dive. It is however, an effective way to hit the deck in a rush.

The score-streak system is very limited and I am gathering that this is due to the fact that we are just getting a glimpse of a small portion of the game through the private beta. What is available though is fun to use, with the stock standards UAV, Counter-UAV and Care Package being upfront. An interesting addition is adding the Molotov as a score-streak as opposed to a lethal that can be equipped.

The standard game-modes of Team Deathmatch, Domination and Hardpoint are available to try out, with Kill Confirmed added later on. A new game-mode which is narrative-driven called ‘War’ is also available for you to try out, which is an interesting addition to the game. For those familiar with Overwatch you will see quite a few similarities in this game-mode. 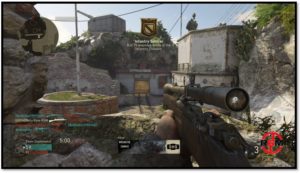 My major gripe with the game-play is the Global Spawn Positioning or GSP if you will. This appears to be extremely broken. All members on my team were experiencing the same issue of having the enemy spawning right beside or behind us. Other installments in the franchise have always struggled with implementing an effective GSP, with revisions to the algorithm being made on a regular basis. Whilst the previous algorithms have not been perfect they most certainly seemed to be more accurate than what is in play in CoD WWII.

I don’t understand what has gone wrong here. Is it a case of a new system being implemented? If so, why? Why reinvent the wheel (and do a bad job of it). Is this just an issue with the beta? If so, that concerns me so close to release that these sorts of issues are not ironed out enough that they don’t carry over to the beta build. Only time will tell I guess however, between camping, drop shotting, snipers and head glitchers, if the spawns are broken as well allowing for spawn camping, this will make the game basically unplayable for many.

Another issue I experienced was inconsistent framerate. At times the framerate would drop so low I thought I would get disconnected from the game. The servers seemed to struggle to hold a consistent connection at times, which didn’t help the situation. Whilst I am fully aware that this is a beta and not the full game, with only 9 weeks until release date shouldn’t we be seeing a more stable product?

Overall the game-play feels a tad too simplified however, still a lot of fun and this will be particularly well received by new comers to the franchise as there is not a great deal to learn to get a basic understanding of how the game works.

Unlike some previous additions in the franchise, CoDWWII nails an authentic sounding spread of gun fire. Where we have gotten used to tinny sounding explosions and guns that sound like they are being fired into a barrel of water, now we have very gritty realistic sounding gun fire that consumes the entire headset.

Now, your experience with the sound in this game will vary depending on the quality of your headset or speaker system however, I found there to be too much noise. It was overkill in my opinion. After cycling through various different settings I was able to find one that still allowed me to hear the enemy creeping up outside the door without sending me deaf from the surrounding gun fire and screams of death.

The constant screams, gargles of pain and explosions, will become frustrating over long gaming sessions I feel. Hopefully there will be an option to opt to turn some of these sounds down without compromising the important ones such as the flick of a pin from a grenade, footsteps and reloading. 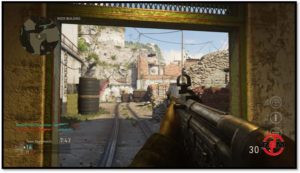 Graphically CoD WWII is nothing to write home about. I have no problem with the graphics, and feel that the drab nature of the color system lends some further degree of authenticity to the war-torn surroundings you are battling in however, the washed-out nature of the art style is underwhelming. Personally I feel that it is in fact for the best, as there is so much going on every moment in some of the matches when playing on the more maze-like maps, that additional detail would make concentrating on your target much harder.

The graphics are not by any stretch of the imagination bad, they are still quite lovely, just not what I would expect from a AAA title that’s being released in 2017. Again though, noting what I mentioned above, and the fact that this is a beta, I wouldn’t let that aspect bother you.

Given that this is an impressions piece I won’t be giving a score, instead I’ll take a thumbs up/thumbs down approach.

Based on my experience with the CoD WWII private beta so far I’m currently giving it a cautiously optimistic thumbs up, with the hope that some key issues noted above are addressed before the full release on November 7th.

In the absence of more maps to gauge my experience on, the problems I had with the beta crashing, and of course not forgetting the legion of snipers and shot-gun enthusiasts I encountered, I don’t feel overly compelled to place a pre-order. However, I will revisit the game after release and see how it has progressed since its beta form.

(This impressions article was based off time spent playing the beta on the Xbox One S version with a Turtle Beach Elite 800 X headset and Elite controller.)