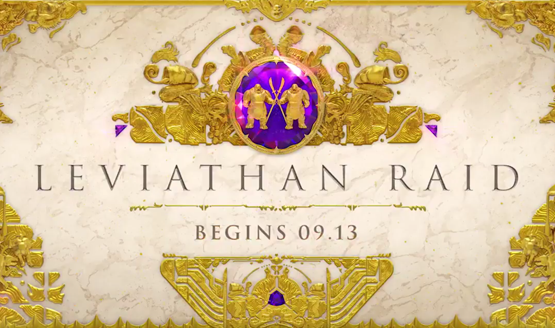 Today marks the release of the first raid added to Destiny 2 since its release on September 6th – the Leviathan Raid. Guardians all over the globe have been scrambling to get their power (light) levels up to a respectable number in order to be able to at least earn the right to take a peek in the front door.

The minimum light needed to enter the raid is 260 however, I recommend going in with no one under 280 as the enemies towards the end of the raid are a power level of 280 and it will be extremely hard for your team to finish the raid if you are all under power.

You will need a fire team of 6 as there is no matchmaking yet so jump onto the clan chat and tee up some sacrificial guardians. This brief walkthrough, coupled with your understanding of the general mechanics of raids, should be all you will need to get through (well that and some skill).

(This run through is ordered based on the week one release. Each week the order the rooms are in rotates however the process inside of each remains the same.)

Up the temple you will see a portal, work your way up to it. No need to kill any of the enemies you see at this point as they will only attack you if you attack them, when you reach the portal it will zoom you up to the top. Head to the left of your entry point and look for relic keyhole holograms. Split your fire team into two teams – 2 to collect relics and 4 to guard. Two relics are located on the right hand side from your place of entry (Crossed Axe & Dog Relic) and the third is directly in front of the entry (Chalice relic). The runners will need to go locate these and retrieve them. Once you kill the ads surrounding the relic area the Standard Bearer will spawn, kill him, take the relic and slam it into the hole near the door located at the holograms. Don’t let the Cabal get too close to the central point or it will trigger a wipe.

You will need to repeat this next process three times:

After the relic is placed a Loyalty Counsellor and Psion will spawn. Enter the bubble that the Psion is in and melee it to remove the shield from the Standard Liberator and kill him. Make sure he is put down before he reaches the relic or he will remove it.

After the third rotation the door will open lead to a Leviathan Raid loot chest, which contains a legendary engram, the Calus’ Selected shader, and the Emperor Calus Token for your first run through on each character for the week. After that you will just get glimmer until the weekly re-set.

You are now in the next room, avoid the pools, they are bad for your health. You will see 5 plates, organize your team to get ready to step on one each at the same time, with two remaining in the centre, to kick off the next section.

You will all need to step on the center plate one at a time to get the ‘Psionic Protection’ buff in a rotation process. All four corner plates must have someone on them at all times during this so use the two who are in the center to rotate with those that are on the corner plates until everyone has the buff. (The four standing on the plates are helping to raise a weight up a chain which lowers to reveal 9 lanterns)

Kill the bather (big cranky dude, can’t miss him), stand on the plate and the chain will lower. Get relieved by someone that’s not on a plate, return to the center and get the buff. Repeat this process until all four chains have lowered (indicated by a loud gong sound).

Everyone return to the middle, put your two most powerful Guardians to the sides of the middle to deal with the ads, while the other four stand on the center plate and shoot the lanterns on the chains (this is a great time to have a Warlock or two with a healing rift). You will need to destroy all 9 lanterns, and quickly, otherwise failure to do so will result in having to start that area over again.

You only have a certain amount of time to shoot the lanterns. If you do not destroy them all you must do another phase. Once you destroy all 9 canisters you will complete this section of the raid.

You will now receive an Emperor Calus Token.

Rinse and repeat Step 1 however this time enter via door in the far right corner. This will earn you a loot chest containing glimmer.

You are now in the next room full of Cabal and Warhounds. Kill them and 2 Prism weapons will spawn. Two Guardians (choose your two most concise communicators) take a Prism weapon each and stay up on the cliff while the rest of the team heads into the safe room down below the golden statue.

The 4 Guardians in the safe room will see 4 Royal Spores spawn. Grab one each and head to the glowing flowers. This is where the two Guardians with the Prism weapons come into this as they will need to guide the 4 to these flowers. As the flowers are approached they will open, the two with the Prism weapons need to step into the light and shoot the flowers with the orbs which will give everyone a buff. It’s best to appoint someone who isn’t geographically challenge as the guide on the ground for this so that there is clear direction given by one person and not four deciding where they want to go next.

This process needs to be done very ninja like, alert no one that you are there until you have a buff of at least x55 (you might have to repeat the process 3-4 times to get this). You can then start killing the 6 major Warhounds (supers, shotguns, swords, best course of action). This will take up to 2 rounds depending on your teams DPS, during which you will have to return to the safe room to get the spores again so you can build up your buff again to enable you to take on the hounds again. Each time you repeat this process it will get faster until you have taken enough health off the hounds. Defeat all the hounds before you can move on. If you take too long the Wahound’s Psionic howl will reset the area.

A loot chest will appear on top of the safe room containing random loot and an Emperor Calus Token.

Rinse and repeat Step 1 again this time entering the third door which is on the far right. You will now earn a chest containing glimmer.

4 Guardians jump onto a round platform each, this will summon the enemies. You will see the meters under the pillars filling up as take them out and then 2 orbs will spawn (at dogs and challis). The 2 Guardians that pick them up will be transported into tunnels.

Communication is key here as the 2 that were transported now have to very quickly run through rows of gates. As each runner approaches a gate full of 9 holes they will see one of these is surrounded by a red ring. This is the call out that needs to be given to the team members in the pillar room. So if the runner is approaching the dog gate and the row in the middle has the red ring, the call out will be “Dogs Middle”. The runner needs to jump through that hole as it contains an orb that keeps them alive.

You will be responsible for shooting an arrow on your plate and that to the right of you. Please refer to the below diagram to show you where you will be shooting. 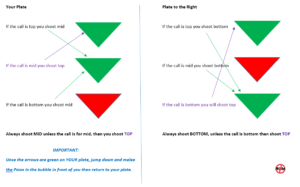 When the tunnel runners emerge they need to place their orbs in the fountain in the middle of the map.

This needs to be completed 3 times by the 2 runners, with the 4th making all team members to grab orbs, enter the tunnel and place their orbs in the fountain. This will complete the trial.

It’s best to assign paths before everyone enters the tunnel as it can get quite confusing. There are not enough orbs for everyone to grab one at each gate so you need to rotate. The best option for this is: The four that were on platforms get an orb at the first gate, dog and sun miss the orbs at the second gate, challis and axes miss the orb at the third.

You are now in Emperor Calus’ throne room. Give him a proper greeting and shoot the challis from his hand. He’ll enjoy your greeting so much he will start spawning enemies for you. Get to killing them and eventually Calus will teleport everyone inside a purple void area. Work out prior to this who is going to stay in the void and who will return to the throne room. The three (generally three but if you have 2 Guardians with strong enough DPS you can actually leave four in the void) that will be returning to the throne room need to quickly run forward and grab an orb. The others will remain in the void.

Upon returning to the throne room there will be 4 councilor Psions above the plates, don’t kill them just yet.

The 3-4 Guardians that are in the purple void will now start to see symbols on Calus’ head. Each of the 3-4 in the purple void needs to communicate to the 2-3 in the throne room which symbol they each see (these symbols are the same as the ones above the 4 Psions in the throne room). Whichever symbol wasn’t called out is the Psion you need to kill. The barrier around Calus’ projected head will start to lower.

The 3-4 in the purple void need to get ready for a barrage of skull projectiles which they need to shoot and then orbs will spawn that will take them back to the throne room. It’s also recommended that those in the void cross-shoot each other’s Psion’s as it is very hard to see your own.

With everyone back in the throne room you will all need to stand on the same plate (where the Psions previously were) to get the Force of Will buff. Attack Calus from there until he is invincible and then progress to the next glowing platform and continue attacking Calus. His attacks are very powerful so be sure to dodge them until you have defeated him. You can anticipate when he is going to attack you he starts to raise an arm above his head, get off the plate before he finishes or you will die.

Rinse and repeat until you have killed Calus. You have to take full advantage of every opportunity to attack Calus as failure to do so quickly enough will result in him killing you all instead.

Congratulations, you have completed the Leviathan Raid.