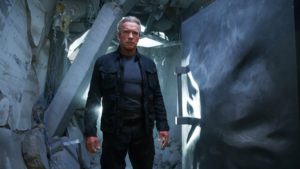 The big news here isn’t that James Cameron is back, or that Linda Hamilton and Arnold Schwarzenegger are returning (according to IGN); it isn’t even that James Cameron (according to flickeringmyth) has said they are planning a trilogy – The big news is that the new Terminator film will ignore Genisys. Not just that, it will ignore Rise of the Machines, and Salvation as well. That makes sense, considering the fact that they want to make a trilogy. In order to do that, they will need to base it in something substantial. They will need a solid back story to run with, and the last film to do anything at all worth remembering was T2: Judgement Day.

Nothing about this movie. This film… It doesn’t matter. The franchise has been in the dumps for 20 years. And I don’t know if ignoring one movie, or all 20 years of crappy sequels will help. Furthermore, James Cameron returning, and dragging along Linda Hamilton will make us all return to watch it. We are compelled to do so, out of respect for her prior work in the series. Arnold has already punched his return ticket. It was a flop, so we owe him nothing.

Now give me my damned ticket. You know I’m going to go see it anyway!

On a side note

James Cameron is in hot water over his comments about Wonder Woman. His statements that the film was not ground-breaking have caught the attention of those who believe that the new film is a step forward for female superheroes and women in film.

“I mean, [Gal Gadot] was Miss Israel, and she was wearing a kind of bustier costume that was very form-fitting. She’s absolutely drop-dead gorgeous. To me, that’s not breaking ground.”

Whatever you happen to think of what James Cameron said, and whatever you take from that quote, the important question is whether or not the negative press will impact the box-office for his upcoming films. The Avatar Sequels are still in the chamber, along with this new Terminator trilogy. Will people look at him as a sexist? Will it matter?

Likely not. People have short memories. I mean, Hacksaw Ridge did well, winning two Oscars, and grossing $67 million (US), and that was directed by Mel Gibson, who came under fire for his antisemitic remarks back in 2006.

Will this movie suck? Likely, based on the two-decade track record however, James Cameron is back, and he has been doing awesome things forever. He plans to reboot the sequels from Terminator 2 on, by claiming that the other films were an alternate reality. It may work… it may.