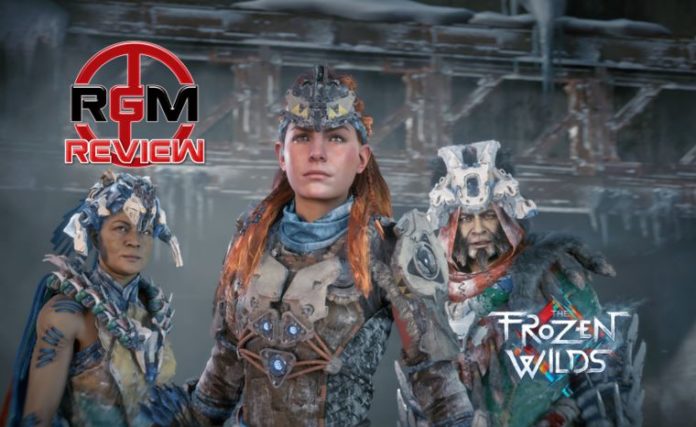 Horizon: Zero Dawn remains at the top of my list of favorite games for being one of the most intensely story driven video games I have ever played. From the moment I embarked on my journey as Aloy through the most stunning environments I have ever seen, I was completely in awe of the intricacy of not only the games graphics, deep storyline, and extensive lore, but also the combat system and game mechanics.

This means that the bar for my expectations for this expansion has been set extremely high……..let’s see how Guerrilla Games has fared:

The Frozen Wilds is set in a region called The Cut which can be accessed by a pass north of the Grave-Hoard and is located on the border of Banuk territory. The Cut has six new key locations for Aloy to explore and much to my delight, a new cauldron called EPSILON. 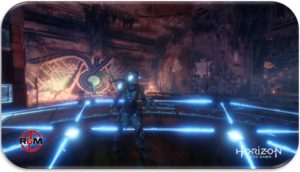 You will notice that on your map you now have two new people to visit marked in blue, both of these characters will give you missions that send you on your journey into The Frozen Wilds (took me a minute to work this out!).

This expansion is set during the main campaign, so if you are only a portion of the way into the main game you can include exploring The Frozen Wilds to your list of things to do however, I would recommend saving it for more towards the end of the campaign. 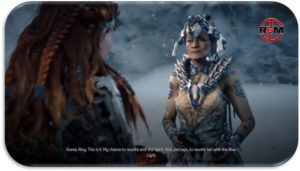 In the absence of any proper leadership from the Banuk Chieftain and their Shaman, Aloy must prove herself through trials, combat and completing favors for people in order to get to the bottom of the mystery which drives this expansion.

A “Daemon” is sending the mechanical animals into a frenzy which is causing the death of Banuk villagers. As you can imagine, they are not overly impressed about this and Aloy’s sense of adventure and selfless nature gets the better of her, so off you go on your journey of discovery.

Not a great deal has been changed or added from the base game in this regard, the combat is still a hoot, the weapons are a bundle of fun to use, and the control system is easy to pick back up and run with. 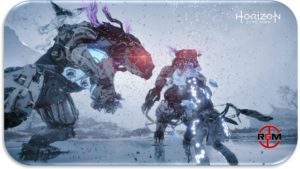 I would highly recommend that you are at least level 30 before embarking on The Frozen Wilds though as you very early on encounter a rather difficult foe to defeat and lower level characters won’t have much fun trying to get passed it. If you are not quite there yet simply stay in the main game and finish off a few missions. You will be at level in no time.

Built on the Decima engine, The Frozen Wilds runs extremely smooth and I experienced no issues with framerate drops however, the painfully slow loading times are still present. It is important to keep in mind though the scale of the environment that is being loaded and the fact that once you are in you can roam free until you die or back out without having to experience further loading. 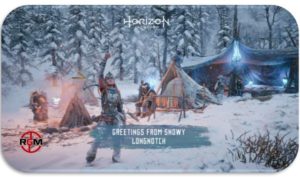 The photo mode never gets old, I can spend a silly amount of time playing around with filters and positioning to get that exact photo that I’m after. The images you see in this review are a result of that. The snowy glaciers, glowing teal environments, shiny mechanical beasts, all mixed with fire-pits and rays of sun-shine create some of the most stunning landscapes I have ever seen in a video game, so it’s no wonder that the developers have implemented such an intuitive photo mode.

Guerrilla Games have once again shown the diversity and insanely high levels of skill their team possess in being able to create an entirely new experience that exists within an already established world.

This is what I was most excited for. New weapons, locations, characters, machines, cauldrons, quests, activities, and errands (not so much the errands).

The new ranged weapons are the Forgefire, Icerail, and Stormslinger. The new heavy weapon is the Mine Cannon. Go find them and have a play for yourself, each have their own attributes and add a lot of fun to the combat. 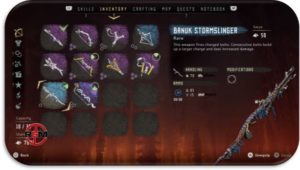 As for new locations, as mentioned above there are six new locations to explore and these are: Deep Din, Drone Hangar, Grey Catch, Keener’s Rock, Longnotch, and Song’s Edge. Be sure to spend a bit of time exploring each area as there are a variety of new audio/text datapoints and collectibles to get your hands on.

There is a slew of new characters to meet. I counted 36 and there could possibly be more. Each has their own identify so there has clearly been a lot of work put into character development even for those who don’t say much or anything at all.

Now for my favorite section of new content – New Machines.

The new machines you will encounter include the Fireclaw, Frostclaw (lot’s of claws in this expansion), Scorcher, Daemonic Machines, and the pain in the butt Control Tower. All are a lot of fun to tackle and as you would expect, each have their own vulnerabilities. 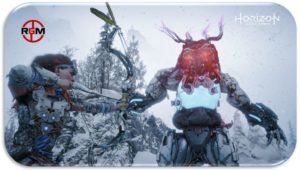 The new cauldron is located once you kick off the Forge of Winter quest. This cauldron is basically a platforming section of the game and you get sent there to defeat the Daemon. Make sure you are fully prepared before you embark on this quest, as the faint of heart will…….. nah just kidding but seriously, make sure you have some time put aside and don’t need to get up to cook dinner 10 minutes later – you will get hooked, dinner will burn.

Nine new side quests have been added, and as you will remember, if you take your time to kill EVERYTHING you see in between each of them, this can provide for many hours of gaming.

Three new activities have also been added. Snowchants Hunting Grounds, Stone Yield Hunting Ground, and a new Tallneck to “rescue”. Whilst these are not extremely stimulating activities to undertake they are a bit of fun and I really enjoyed their inclusion. The hunting grounds are also a great way to master your skills again if you have been away from Horizon: Zero Dawn for a while.

Now moving onto everyone’s favorite thing to do – Errands…………

Seven new errands have been added and I highly recommend you take the time to check them out. I won’t give anything else away apart from to say that I really valued this addition to the game. 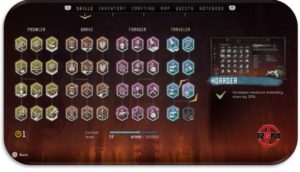 A new branch of the skill tree has also appeared giving you the option to expand things such as your inventory however, it’s only a 20% increase and if you are a closet hoarder like I am you will still find managing your inventory very hard. I’ve maxed out the size of all my carry pouches and tried to trade in anything redundant but my inventory just seems to magically refill within 5 minutes. There are a few cool additions to your skill sets including the ability to launch into a strike off the back of a beast. Nothing ground breaking but these new skills certainly add to the fun.

Last but not least, a new resource has also been added called Bluegleam. This is a new currency in The Frozen Wilds which is rare and valuable. You can use it buy high-powered weapons from a travelling merchant.

As you would expect, with new content comes new trophies. This always grinds my gears when I have the platinum on a game as I go from 100% completion back to about 70% however, it’s a clever way of the developer ensuring that hunters can’t resist the urge to get that 100 back again. 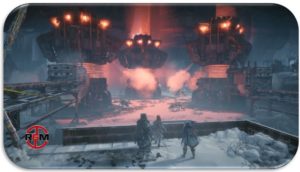 These trophies are all relativity easy to acquire and a lot of fun to pursue. I have included a list of them below for you, so if you are worried about spoilers just head to the next section. 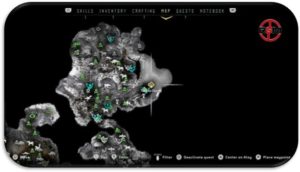 For those of you who have already played Horizon: Zero Dawn’s main game, I don’t have to tell you how visually superior and spectacular this expansion is. Every frame is simply stunning, pure eye candy.

This game really showcases the power of the Decima engine and makes me extremely excited to see how Guerrilla Games utilize this engine in the future. 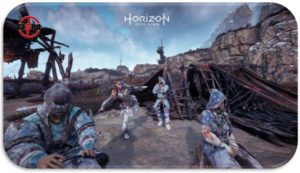 The environmental sounds are one of the first things you will notice when you get to The Cut. The sound of the snow crunching beneath your feet, then changing as you step into a patch of snow covered grass, and then onto ice – it’s simply amazing. I was astounded at how realistic every step sounded.

When you couple the breathtaking graphics of The Frozen Wilds with intricate and accurate in-game sounds, you create not only a photo realistic environment but one that almost makes you think you can feel the cold in your own lounge room. I had goose bumps at one point, just a brilliantly well done expansion.

The Frozen Wilds expansion for Horizon: Zero Dawn is worth every single penny. Depending on how you play it and the amount of activities you completed you can breeze through it as quickly as 10-12 hours, or spend as long as 20-25 hours completing everything.

The environments are spectacular and second to none that I have seen in other video games, with memorizing glacier glows and chilly blasts of icy snow, and the new machines have an added color range which really lights up the screen.

Whilst the storyline is not quite as compelling as that of the main game – naturally, it is still a lot of fun to play and feels like it has clear purpose.

I highly recommend The Frozen Wilds to anyone who just enjoys good video games, and am thoroughly looking forward to any further expansions that Horizon: Zero Dawn has to offer in the future.