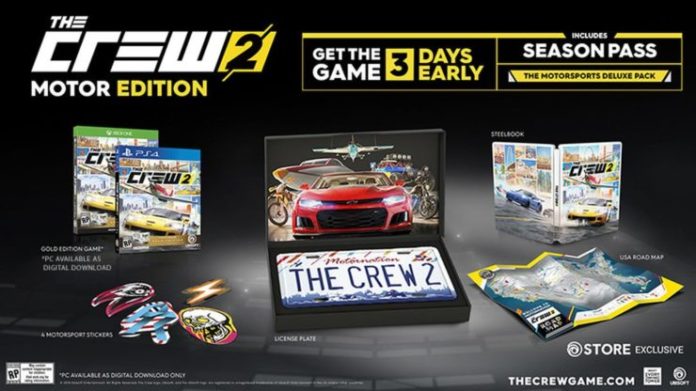 As with most games these days, The Crew 2 was delayed from its initial release date leaving fans a tad disappointed. Ubisoft have now however, announced that The Crew 2 will release on June 29th for Xbox One, PlayStation 4 and PC.

If you can’t wait until then though you have two options available to you. One is to register for the beta testing, just follow this link and fill out the required details. The other option is to pre-order the Motor Edition which entitles you to play three days before those without it.

The Motor Edition also comes with:

The more you play on and earn experience in The Crew 2, the more XP you will rack up enabling you to drive a variety of cars, bikes, boats and planes. Competing in competitions is where The Crew 2 seems to really shine, with options such as street racing, off-road, pro racing, and freestyle competitions. You can check out the trailer below:

The Crew 2 Motor Edition lets players get the game three days early, allowing them to gear up before their competition on June 26th, 2018. Now available on the Ubisoft Store, this exclusive edition gives players the most advanced motorsports experience. The Motor Edition also includes:

–         A customised American The Crew 2 license plate that comes in a high-quality collector box, an exclusive Steelbook, the official Roadmap of the game and four original stickers

Players who pre-order the game will receive The Crew 2 Legendary Motors Pack, which includes exclusive vehicles such as the Mercedes-AMG C 63 Touring Car 2016 and the HARLEY-DAVIDSON IRON 883 2017.

Players can start their in-game vehicle collection right now with The Crew Rewards Program. By completing a series of monthly challenges in the first installment of The Crew, players can unlock up to 19 vehicles in The Crew 2, including exclusive water vehicles. For more information, please visit www.thecrewgame.com/rewardsprogram