E3 2018 is finally here and the EA PLAY press conference got things started with a number of announcements during their presentation this weekend.

This year, EA PLAY was hosted by the always energetic Andrea Rene, co-founder of whatsgoodgames.com (@andrearene/@WhatsGood_Games).

Oskar Gabrielson and Lars Gustavsson took the stage to talk about Battlefield V. The dynamic destruction system looked amazing as well as the ability to move defensive weapons around the battlefield. Character, weapon and vehicle skin customization will be possible. One of my favorite game modes in Battlefield 1, War Stories, makes a return with a unique focus on individual stories to connect you to the soldiers who made an impact in World War II.

They confirmed no loot boxes and no premium passes which, means parents and gamers pocketbooks alike can breathe a sigh of relief. While it came as no surprise that EA would announce a Battle Royale mode for Battlefield V, the reactions were mixed in the crowd.

Reactions on Twitter poked fun at EA jumping on the Battle Royale bandwagon.

LOL! At @Battlefield V putting in a Royale mode too! Feels totally tacked on just because. You really didn’t need to. But hell I’m not going to say no to MORE modes. At least they didn’t strip things out and give up on single player like COD.

Lmao half the audience booed at Battlefield V having Battle Royale and half cheered. This describes the state of the community 😂 #EAPlay2018

Adding more game modes isn’t necessarily a bad thing, however, seeing the reaction makes you wonder if gamers are getting weary of the Battle Royale trend. We can’t wait to get our hands on the game this October. Be sure to subscribe to EA Access for early access as well!

EA also announced that EA SPORTS FIFA 18 is currently FREE TO PLAY on Xbox, PlayStation and PC for a limited time. 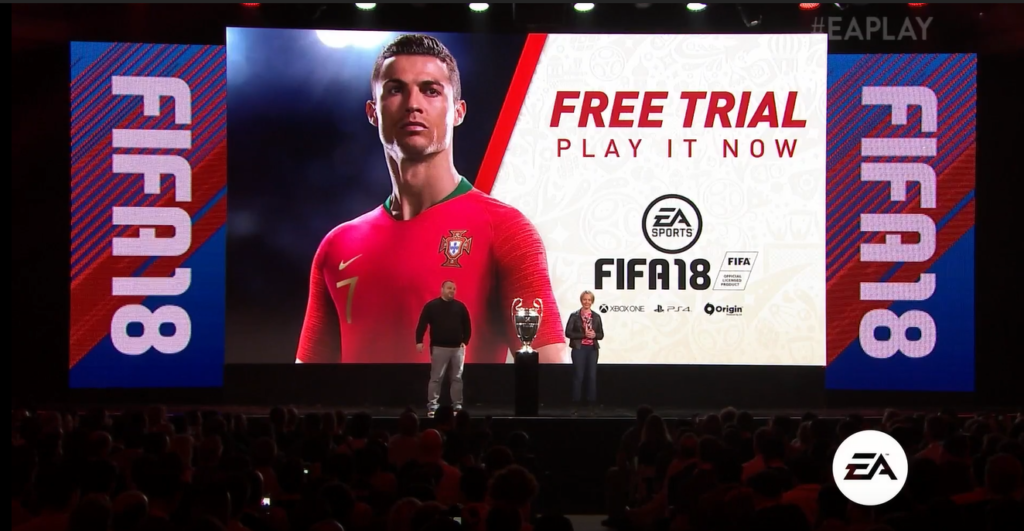 A few weeks ago , EA acquired the cloud technology and team from a subsidiary of GameFly. During the press conference, they announced they are working on a game streaming service to “extend the experiences they already play on partner platforms”. They also mentioned “new modalities of play across a whole variety of platforms.” Could this mean cross-platform play? They currently have a tech demo running during E3 week with games streaming in full HD from the cloud.

EA shocked the crowd when they announced that Madden is making a return to PC for the first time in over 10 years.

With Origin Access Premier, the vault – which, currently has a large library of older EA games, will expand to games from other publishers. EA looks to be taking aim at services like Steam and GoG on the PC. This expansion of the Origin Access service will launch later this summer.

Respawn Entertainment’s CEO Vince Zampella was in the crowd and announced the name and setting for their upcoming Star Wars title. It will be called Star Wars: Jedi Fallen Order. It is set during the “dark times” which, would be somewhere between Star Wars Episode 3: Revenge of the Sith and Star Wars Episode 4: A New Hope. The game will be released Holiday 2019.

Vince mentioned that his company is “working on a bunch of stuff” – hopefully Titanfall 3 is one of those things. Just sayin. 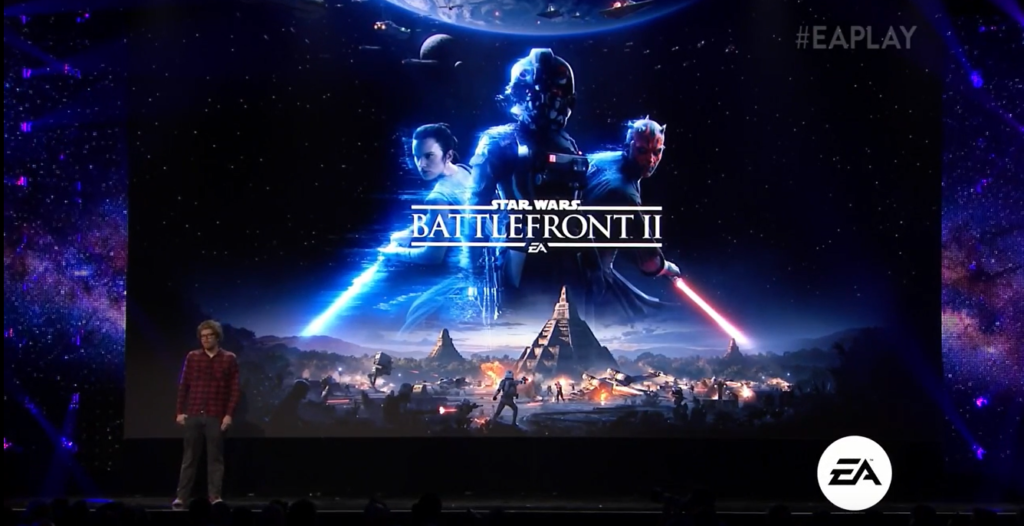 It was awkward to hear Star Wars Battlefront II design director, Denis Brannvall apologize for the lackluster reception at launch and the changes they made based on gamer backlash. However, those mistakes have been corrected and hopefully, EA has learned from this.

To coincide with the Solo: A Star Wars Story movie, the team will be releasing new content next week. Kessel will be a new world to explore as well as the return of the game mode: Extraction.

Later this summer, multiplayer mode will include a squad system to make it easier for friends to team up and play together. A new starfighter mode is coming which will finally allow you to dog fight with hero ships.

Finally, a large scale multiplayer sandbox mode with capture based objectives integrated with taking out capital ships will be introduced later this year.

The Clone Wars universe will finally be joining Battlefront with one of the largest levels ever built on Geonosis. With this new announcement, brings a new villains – General Greivous and Count Dooku and a new heroes – Obi Wan Kenobi and Anakin Skywalker! 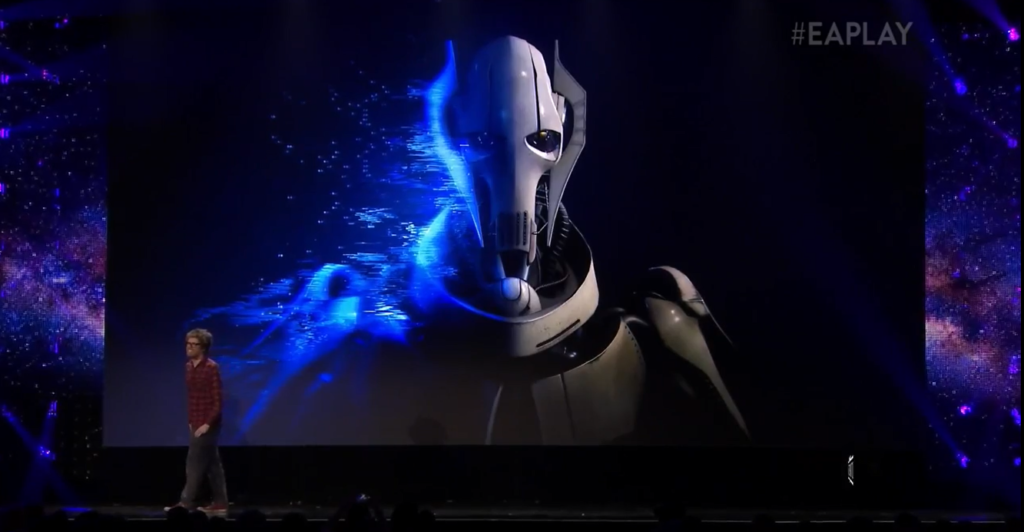 Kudos to the development team for the additional content that has been released since launch! 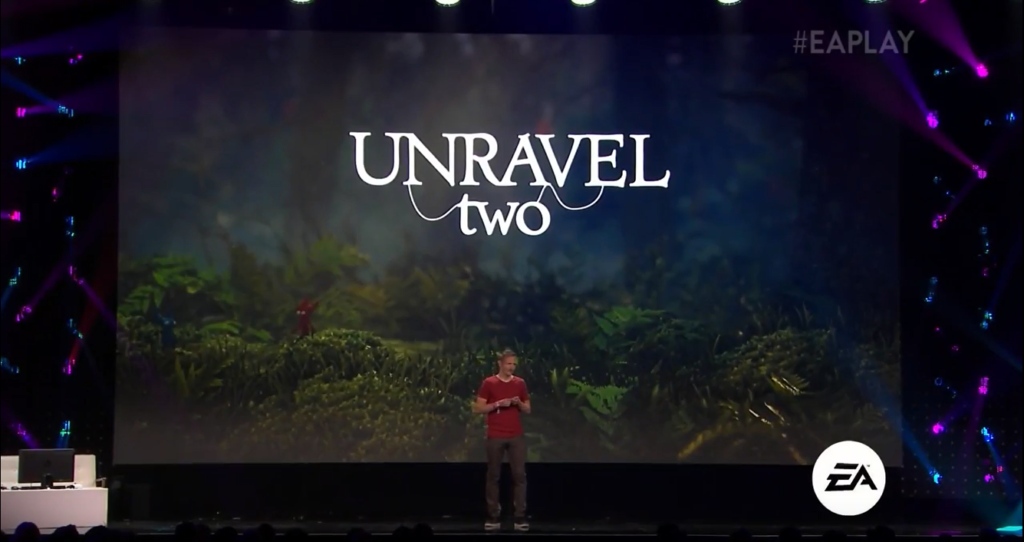 The sequel of the critically acclaimed platformer Unravel, introduces a co-op mechanic where you play as two characters or with a friend as you travel through a beautiful world.

According to the official game page, “It’s a platforming adventure game seen from a unique perspective, or two. Play as a pair of Yarnys – small beings made of yarn and connected by a single thread – in local co-op or as a single player. Run, jump and swing through platforming puzzles, foster friendship, and shed light on a world covered in shadow.”

Not only was this announced during the press conference, the game is available now on PC, PlayStation, and Xbox One. EA Access members can play for free today as well as get 10% on the purchase of the full title. 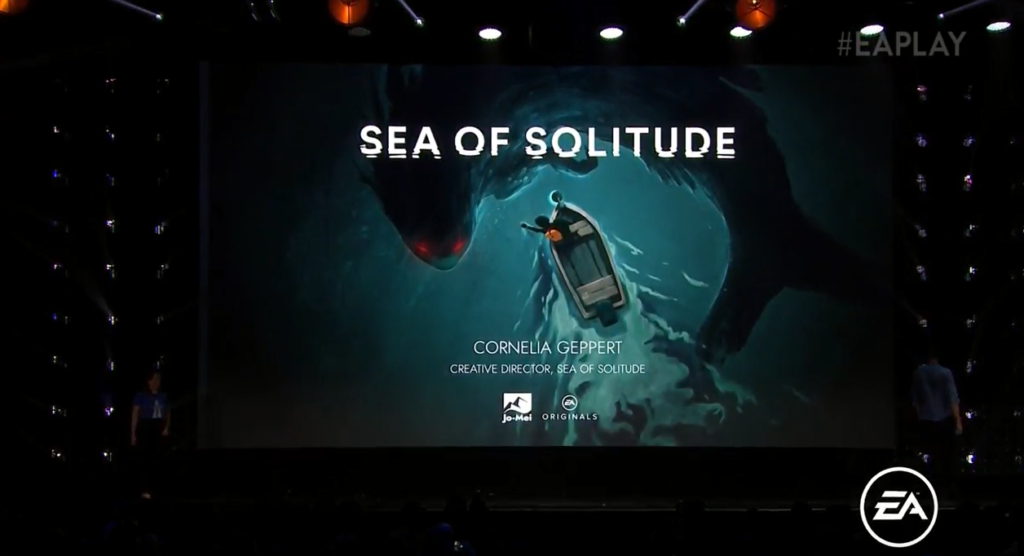 Berlin’s Jo-Mei Games, Sea of Solitude, is an indie title which takes a unique approach to portraying the human condition of feeling lonely. They hope to make players feel the emotions that come with truly feeling alone in the world.

The game can be played if you want to simply explore a fantastic world but you also have the option of going deeper to explore the different kinds of loneliness. You play a young woman named Kay who has been so consumed by darkness, anger, hoplessness, worthlessness. You will discover how this happened to her and how to change her back from a monster into a human again.

EA unveiled a trailer for NBA LIVE 19 which looked amazing!

We’re not going to talk about the awkward on-stage dialogue between JuJu Smith-Schuster and MADDEN NFL 18 Champion Young Kiv so here’s a trailer for the game instead.#chasethatmoney

One of our most anticipated titles this year is Anthem. We finally get a closer look at the gameplay with the different classes in a panel style discussion with Andrea Rene on stage.

Here is a TLDR of the features discussed on stage:

We will be seeing more from EA over the next week so stay tuned! Let us know what you think in the comments below and on Twitter!