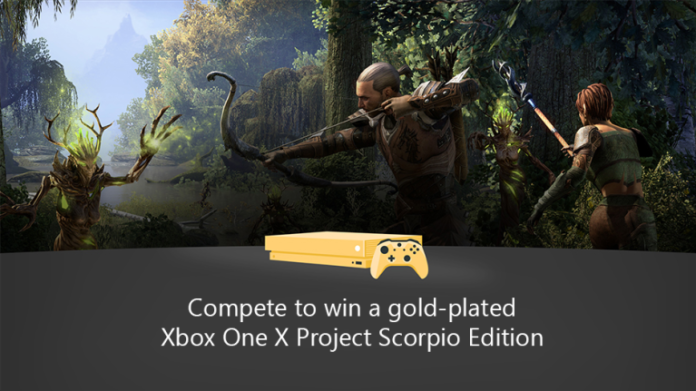 The Xbox Game Pass Quests: Summer Edition has kicked off. What exactly does that mean? Well, basically if you are a subscriber of the Xbox Game Pass and meet certain criteria by playing games, you are then in the running to win prizes.

Here are the details of the first quest, which is active now:

Starting today, complete both Quests listed below to get a Foxbat Brassilisk from The Elder Scrolls Online: Tamriel Unlimited, plus a chance to win a gold-plated Xbox One X Project Scorpio Edition.

Complete both Xbox Game Pass Quests to get your reward. Learn more and track your progress here.

Pretty simple, right? The next quest will be unlocked on July 17th, so be sure to check back here for those details.

The Xbox Game Pass can be accessed for free if you haven’t yet tried it out, simply click here to start your 14-day free trial.

Every two weeks, over the course of summer, a new quest will be unlocked so don’t worry if you’re not an Elder Scrolls fan, and completion of your quests earns you guaranteed rewards.

For members in the United States, United Kingdom, and Canada, you will also go in the running for the grand prize of a gold-plated Xbox One X Project Scorpio Edition.

For members everywhere else, especially my fellow Australians, whilst you may pay more for the exact same service, you are not eligible for the grand prize. Instead you must settle for Microsoft’s undying gratitude for your unwavering support and thousands of dollars invested into their franchise (Disclaimer: You may not receive the above mentioned gratitude).

All jokes aside, this adds a new fun element to the Game Pass which is already, in my opinion, an excellent service especially for the low monthly fee and over 100 titles to choose from.