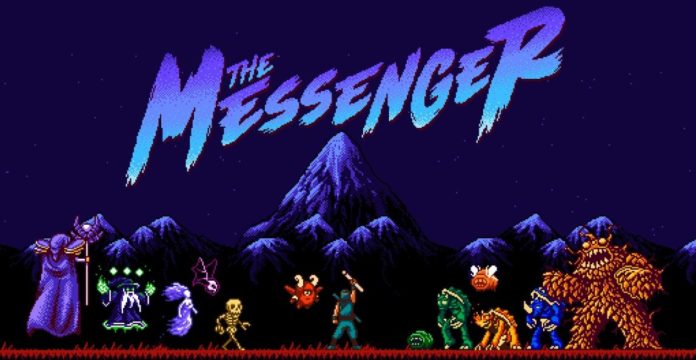 During this year’s Montreal ComicCon, I visited the Indie Zone, where indie game developers show off their games. During the Nintendo Nindies Showcase last March, one of my most anticipated indie games was The Messenger, developed by Sabotage Studio, located in Quebec, Canada. When I arrived on the show floor, I heard some awesome chiptunes music blared through the speakers. I was impressed with the studio’s presence excited by what I played. Read on for my impressions of The Messenger. 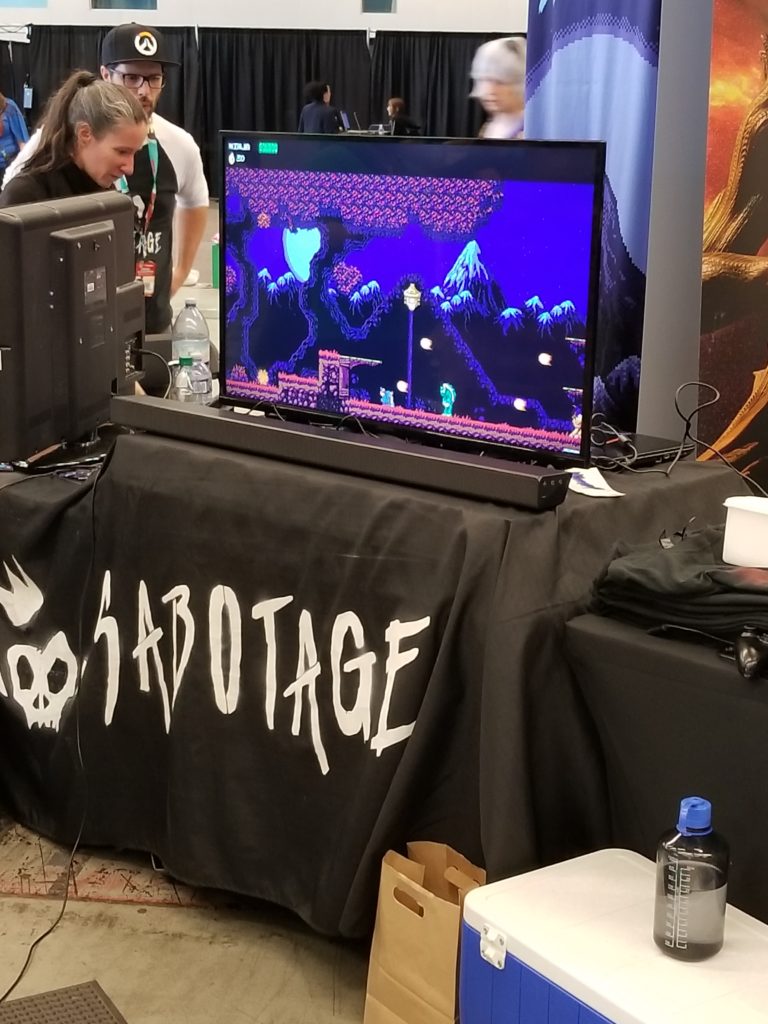 I had the pleasure to talk with Thierry Boulanger, one of the founders of the studio. When he spoke to me about the game, I really sensed the pride behind the work his team did. The version of the game on display was a special demonstration version. Scenes were cut differently, and the upgrade system was tweaked so more powers were available in a short period of time.

Thierry told me that the inspiration really came from the days where he and his team were playing NES and SNES games. With The Messenger, they were able to combine everything they loved about the games from this era. The music is made with chiptunes, giving it a true retro feeling. In terms of graphics, the story combines both 8-bit and 16-bit aesthetics which is very unique. 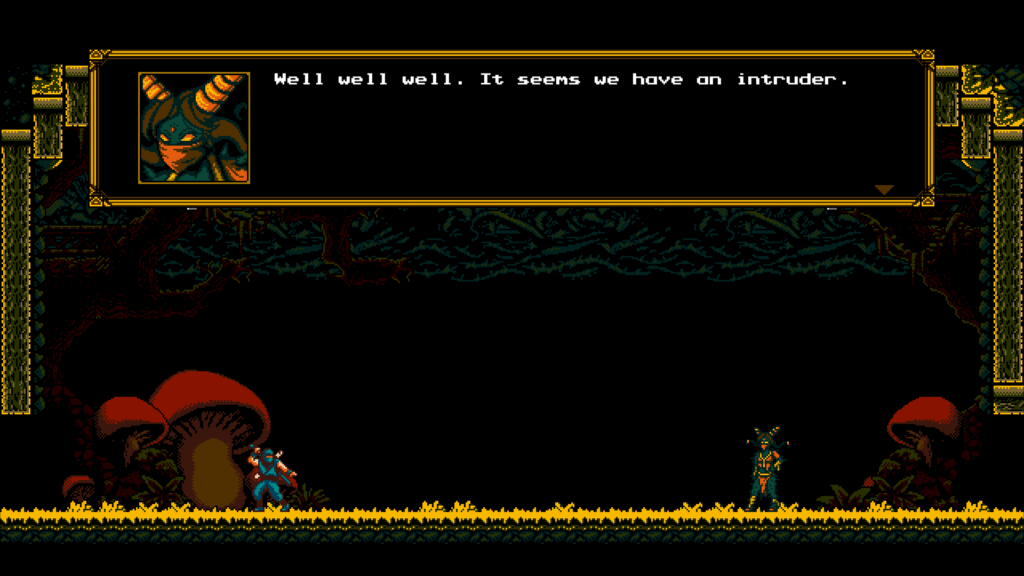 The story is simple: you belong to an Asian village, in which the legends of a Western Hero protects the village from destruction by demons. When the demons appear unexpectedly, all hell breaks loose and a lot of people die. The Western Hero finally arrives and chases away some of the demons. He gives you a mission to help him: bringing a scroll to a group of mages at the top of a mountain.

My first impression of the gameplay was that it had a classic action-platformer feel like Ninja Gaiden on the NES. The 8-bit graphics are stellar. It plays pretty linearly and you clear stages and bosses as you progress. The controls are tight, fast-paced and very responsive. For me, it really felt like a mix of new and old. In terms of interface, some enemies and patterns reminded me of the Mega Man franchise and the NES Teenage Mutant Ninja Turtles game. Thierry told me that there was, in fact, some inspiration coming from it, as those were the games many people on the team grew up playing.

At one point though, the story shifts and the gameplay does the same. The game also changes graphical styles from 8-bit to 16-bit. At this point, the game starts to feel more like a Metroidvania-style type of game. You still have plenty of enemies to fight and levels to traverse. A brand new mechanic appears at the same time. You can user portals that take you from the 16-bit to the 8-bit world, and vice-versa. Switching from one to the other allows you to bypass obstacles and reach certain objectives that would not be accessible in any other ways. 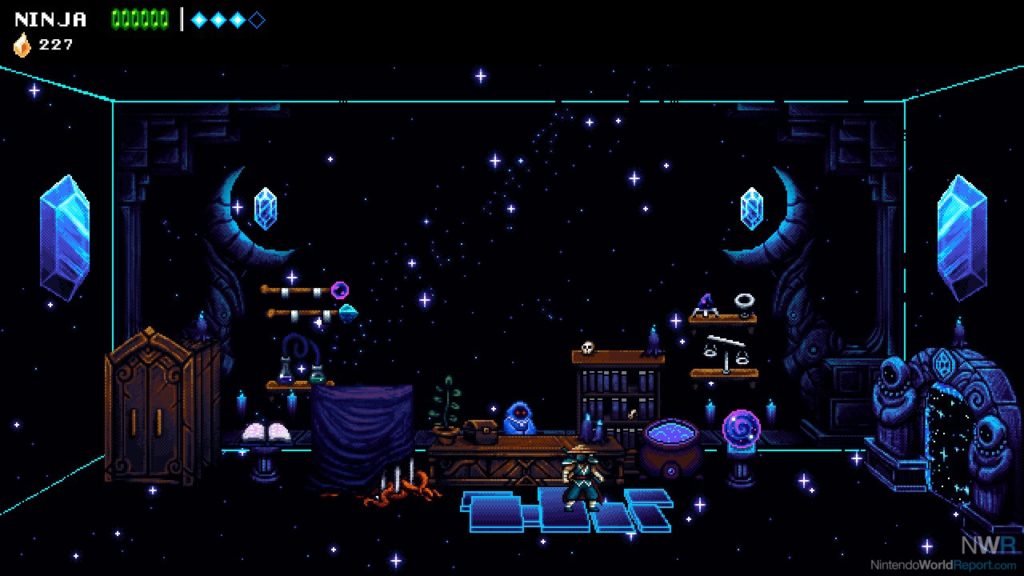 There are some cool RPG elements in the game. You can upgrade and customize the skills that your character can use. As you play, you collect coins which can be used when you reach portals that bring you to the Shopkeeper – an entity that allows you to upgrade your abilities. There are a few branches of the upgrade tree which adds variety to your character’s abilities. 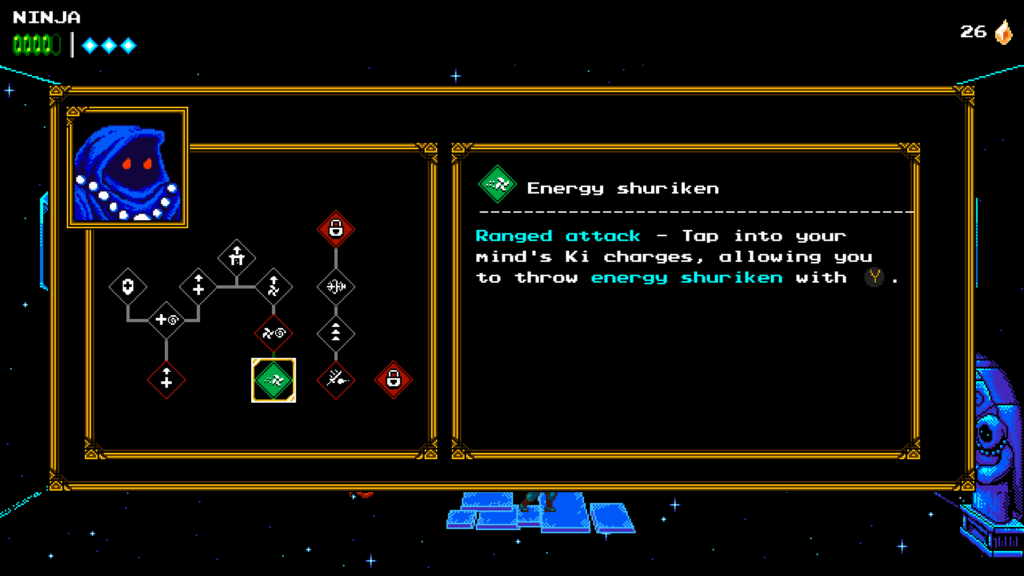 The visits to the Shopkeeper also allows you to see the effort the writers put into the game. It is filled with humor and references to classic games. By just chatting with the Shopkeeper, you can see allusions to classic retro games tropes. Some names that will ring a bell to those who played many NES games back in the days. It was very fun to see that.

For an indie game, you can expect a lot of content. Thierry Boulanger told me that there are a good 10+ hours of gameplay. The game has been getting a lot of accolades since the studio started to show the game at different gaming conventions, and I can see why. My little time with it was fun, and I just wanted more. Was this game on your radar? Will you be picking this up? Let us know in the comments, on Facebook or on Twitter.