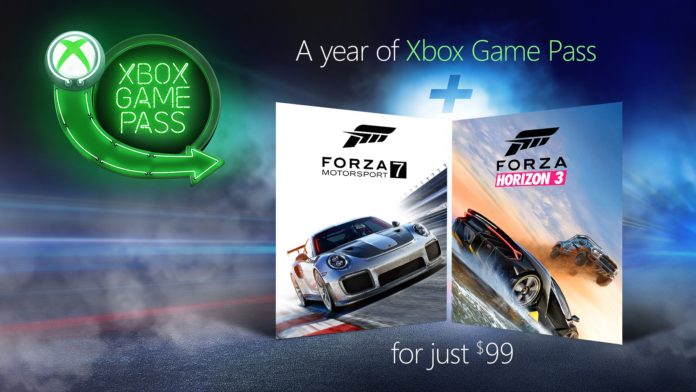 If you’re the kind of person that likes to get their subscriptions paid up in advance, this might be an enticing deal for you.

You’ll effectively be getting two months of game pass for free with the Forza games chucked in at no extra price. If you’re a fan of the franchise but haven’t gotten around to picking up the latest instalments, this is a pretty good deal. you can check out all the details released today by Major Nelson below:

With Xbox Game Pass, you can experience the ultimate value and freedom to play over 100 great games, including new Xbox One games from Microsoft Studios the day they release.

Microsoft is excited to announce a special offer that unites Forza and Xbox Game Pass fans. Starting today, get the best deal of the season for Xbox Game Pass and Forza games, just in time to hone your skills for the Forza Horizon 4 launch on October 2. For a limited time, get a year of Xbox Game Pass ($120 value), Forza Horizon 3, and Forza Motorsport 7 to keep – all for just $99. This offer is open to new as well as existing Xbox Game Pass members, starting September 13 through September 30, so get it today!

You can take advantage of this offer on Xbox.com or from your Xbox One console. You can begin playing games with Xbox Game Pass immediately and will receive codes to download Forza Horizon 3 and Forza Motorsport 7 via Xbox Message Center, likely within 7-10 days, but no later than October 21, 2018.

If you have a knack for racing or have just always been interested in giving the Forza series a try, this is the offer for you. Not only will you receive access to Forza Horizon 4 the day it launches on October 2, but you can also check out the most recent titles from the Forza Horizon and Motorsport series with this limited-time offer.

Forza Motorsport 7 lets you experience the thrill of motorsport at its limit with the most comprehensive, beautiful, and authentic racing game ever made. Forza Horizon 3 puts you in charge of the Horizon Festival where you can customize everything, hire and fire your friends, and explore Australia in over 350 of the world’s greatest cars. Make your Horizon the ultimate celebration of cars, music, and freedom of the open road. How you get there is up to you!

From recent blockbusters to critically-acclaimed indie titles, Xbox Game Pass lets you discover and download games you’ve always wanted to play or revisit favorites that you’ve been missing. With new games added every month, and the option to cancel anytime, Xbox Game Pass is your ticket to endless play.

Stay tuned to Xbox Wire for more news on Xbox Game Pass and all things Forza Motorsport. For the latest in Xbox Game Pass news, follow us on Twitter and Instagram. Until next month, game on!