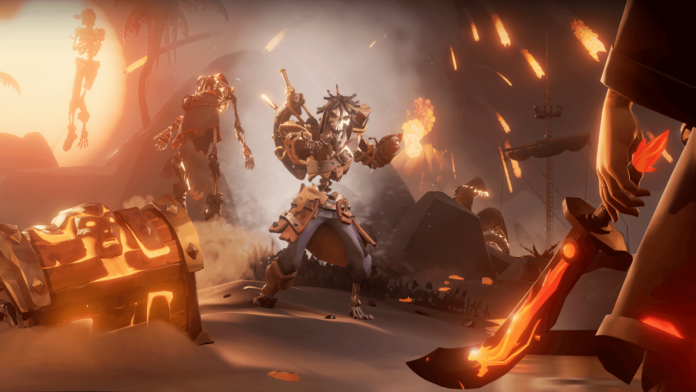 Sea of Thieves is continuously adding new content each month. This month players have noticed an increase in activity from the Molten Sands Fortress in the Crews of Rage update. Duke has some much needed bounties to be completed that will offer very unique rewards after you turn in the new Chests of Rage.

Players will notice that these new chests seem to be full of rage. Without keeping these chests cool they will explode. Don’t think of these as harmful chest to you as a player, you can also use them against other pirates and any annoying skeletons. These new cursed Chests of Rage are one of the few things that were apart of the update. Rare has released a video detailing what was in store for players for the rest of this February and beyond:

The final set of Tomes has been added to Sea of Thieves. Players can take the five Tomes of Resurrection to Duke to unlock more Ashen cosmetics. One of the nicer additions that costs actual money is the new Pirate Appearance Potion, this will allow players to change their appearance from the first time they made their pirates. Now you can take a second or even third shot at getting your character to look better. All your progress will continue to go with you.

Rare is doing something great with these monthly content updates. The game wasn’t full of activity at the start of its life. Now the game is available to purchase, which I recommend, and also playable as apart of Xbox Game Pass.