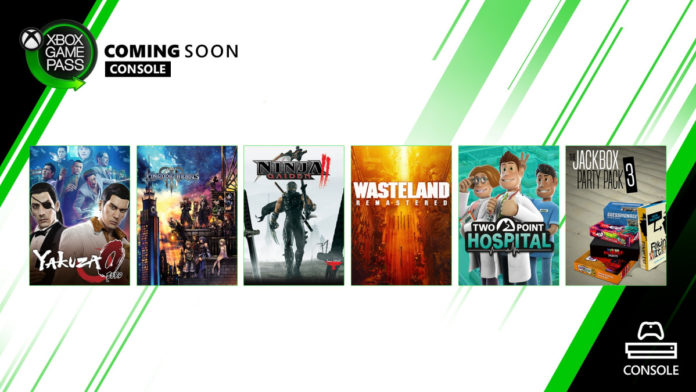 Starting this week, several new titles are being added to the Xbox Game Pass.

The ever growing library will welcome the following titles:

This sequel to the best-selling original Xbox game pits legendary ninja Ryu Hayabusa against hordes of malicious enemies as he sets out on a journey that will determine the fate of humanity. With an assortment of new weapons, enemies, and locations, the classic Ninja Gaiden II redefined the action game genre, providing a visceral, thrilling experience.

Having learned that Master Xehanort is plotting to start another Keyblade War, Sora and his friends continue their search for the seven guardians of light who can stand against the coming darkness. Join Sora as he travels across new and exciting Disney worlds that deliver a story on a grander scale than ever before. With a new battle system as well as thrilling action and spectacular team-up moves with beloved Disney characters, Kingdom Hearts III inspires and entertains unlike anything else out there.

Design stunning hospitals, decorate them as you like, cure very unusual illnesses and manage troublesome staff as you spread your budding healthcare organization across Two Point County. But don’t expect it to be populated with your usual types of patients. In this world, you’ll experience Two Point’s trademark quirky illnesses; from light-headedness to cubism – each requiring their very own special type of treatment machine.

The original Wasteland brought the post-apocalypse to video games and inspired a genre. Play one of the definitive RPGs with overhauled graphics, sound, and expanded musical score. It’s 2087, nearly a century after an all-out nuclear war turned vast swaths of Earth into a radioactive hellscape. You’re a Desert Ranger, a band of stalwart lawmen who are the only hope left in what was once the American Southwest — and good people’s last defense against hunger, sickness, raiders, and mutants. Now something more secretive and sinister is menacing humanity, and it’s your job to investigate.

The glitz, glamour, and unbridled decadence of the 80s are back in Yakuza 0. Play as Kazuma Kiryu and discover how he finds himself in a world of trouble when a simple debt collection goes wrong and his mark winds up murdered. Then, step into the silver-toed shoes of Goro Majima and explore his “normal” life as the proprietor of a cabaret club. Fight your way through Tokyo and Osaka by switching between three different fighting styles instantaneously and beating up all manner of goons, thugs, hoodlums, and lowlifes. When you’re not fighting, kill time in 1980’s Japan. From discos and hostess clubs to classic SEGA arcades, there are tons of distractions to pursue in the richly detailed, neon-lit world.

The threequel to the party game phenomenon features the deadly quiz show Trivia Murder Party, the say-anything sequel Quiplash 2, the surprising survey game Guesspionage, the t-shirt slugfest Tee K.O., and the sneaky trickster game Fakin’ It. Boot up the game on your console and share your room code – up to eight players can use their phones or tablets as controllers and play along! Plus tons of new features just for streamers. It’s a digital box full of fun!

You can join the Xbox Game Pass now for $10.95 AUD and gain access to the library with over 100 titles, which is growing every week. For more details click here.

You can check out the new titles coming to the Xbox Game Pass PC beta here.