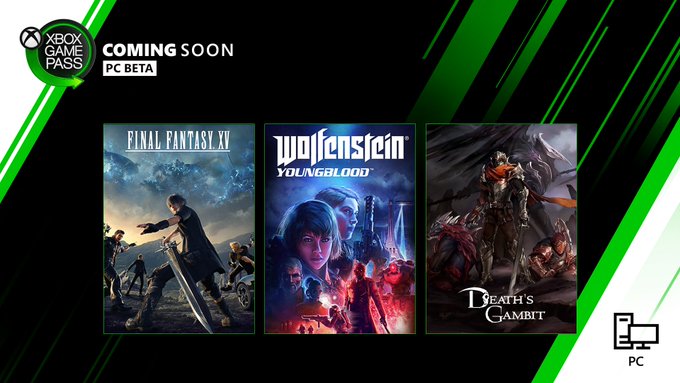 The Xbox Game Pass library continues to grow, with new titles announced for addition this week.

Joining the library will be:

The Final Fantasy series is making its way to Xbox Game Pass for PC starting on February 6 with Final Fantasy XV! The highly anticipated next instalment in the legendary series that defined storytelling and adventure in video games. Featuring action heavy combat, innovative gameplay, and immersive graphics that push the limits of modern hardware. Final Fantasy XV is an awe-inspiring tale that transports audiences into its vivid imagining of a fantasy world based in reality.

The promise of immortality lies at the heart of Siradon in this challenging 2D action platformer with deep RPG elements. As Death’s right hand, challenge the undying guardians of the realm and endure the eternal struggle to purge their souls. But what reward awaits a faithful servant of Death?

19 years after the events of Wolfenstein II, BJ Blazkowicz has disappeared after a mission into Nazi-occupied Paris. Now, after years of training from their battle-hardened father, BJ’s twin daughters, Jess and Soph Blazkowicz, are forced into action. Team up with a friend or play alone to level up, explore, and complete missions to unlock new abilities, weapons, and more to complement your playstyle and customize your appearance in the most open-ended Wolfenstein experience to date.

Other benefits you can look forward to from being a subscriber to this evolving service are:

Love is in the air with their annual Valentine’s Day event. Mate tame dinosaurs and score chocolate rewards. Ahh, romance.

Happy Valentine’s Day! What more romantic way could you spend your holiday than by gathering a team of loved ones to make a 4v4 team and tear it up in an electrifying online brawler where every fighter comes mechanically enhanced for mayhem? They should make greeting cards just for this.

–          February 11 has some killer DLC coming at you. Reminder that you can use your membership to get up to 10% off DLC and add-ons while the related games are in our library!

–          Dead Cells DLC – The Bad Seed (Console and PC). Harvest a few souls with your new scythe! Play through The Arboretum, The Swamp, and The Heart of the Swamp.

–          Metro Exodus DLC – Sam’s Story (Console and PC). In this sandbox-survival expansion, forge Sam’s path on his journey through Vladivostok on his mission to find his way home to the USA, where he hopes to find his family – alive. Help Sam find his way away from the Aurora in search of a way back to the USA.

The Xbox Game Pass, in our opinion, has become some of the best value for money out there when it comes to game based subscriptions. In a recent poll that we conducted, 86% of Xbox gamers said that they are subscribed to this service. That’s a huge percentage, showing that this is a service that has been widely embraced by the Xbox community.

With the introduction of the Ultimate Xbox Game Pass, you not only get access to the pass library (244 games) on both console and PC, but your Gold membership is also included.

If you’ve been thinking about trying out the pass, now is a great time to get on board as you can purchase your first month’s access for just $1.