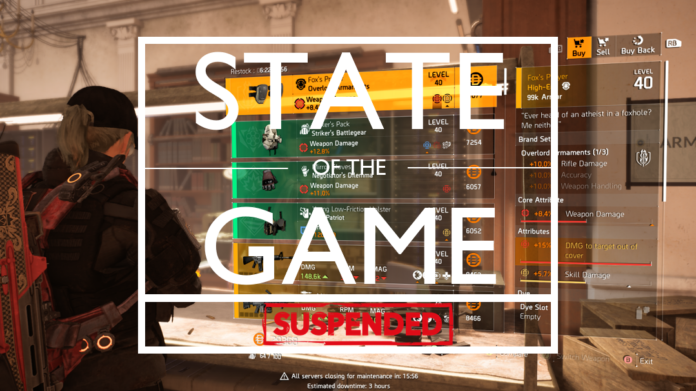 Below I will cover:

In addressing the Account Sanctions – or suspensions – that have been issued this week, Gansler and Bode explained that they were made aware of a DPS exploit when interacting with turrets during the week of March 17th. Every time they fixed it new ways to exploit the glitch were found. They rolled out another fix on March 20th to hopefully address the new issues. Over that weekend they learned there were even more ways to exploit the glitch, so they rolled out more fixes. Last week they rolled out another fix but – yes you guessed it – that didn’t work either.

Over the weekend they looked at data to identify people who used the exploit. They clarified that their detection method used looking at your account, not who were playing with. What you have been doing, not who you have been doing it with. They have strong confidence in the suspensions, and that you couldn’t have been caught out in a random match making group and received a suspension subsequently. Basically – if you got suspended – according to the devs – you were cheating.

No one has been banned, only suspended for 7 days. The cases put forward where players think they have been suspended unfairly, have been looked at individually and those suspensions still stand.

Whilst it’s great to hear that they have so much confidence in their detection system, I can 100% guarantee you that this has not captured all of the people using the glitches/exploits. I am aware of multiple cases of people openly using these glitches and they are still playing the game today, with multiple videos up demonstrating it. So a lot more work needs to be done here. Having said that – if they are so confident that they have captured everyone who used it – and haven’t – then how much confidence can we have that all those who received a suspension deserved one?

The devs encourage you to contact support if you ever feel that there is something wrong with your account let them know. This includes if you received a suspension but did not use any glitches.

They wrapped up this topic by stating that nowhere near 50% of players received a suspension, and that the majority of people didn’t use the glitches. You should be very clear on this though – if you continue to do things against the terms of service you could get a permanent ban, not just a suspension.

Whilst there are a significant number of bug fixes and updates in the works right now (you can check out the proposed changes here) a definite schedule can’t be promised. With most of the dev team currently working from home, productivity has dropped.

Bruce Kelly – Game Designer, advised that Title Update 8.5 is scheduled for next week – addressing issues such as Control Points not resetting, the Striker’s Battlegear set not working properly, and balance changes for NPCs.

They are currently also working on environmental hazards that are causing pain points. There should be no mechanic in the game where you are at full health and armor and can be “one shot”, says Kelly. These issues are currently being addressed.

Kelly advises that they are still adjusting to the work from home scenario, which reduces their clarity and visibility of what everyone else is working on. They are finding it challenging.

The isolation is reducing their knowledge of what is going on in other people’s space, and their interactions are so much slower right now, using digital channels where once they could turn around and ask a direct question.

Title Update 9 is set to roll out later this month, however due to the constraints mentioned above they are unable to put a specific date on the update as of yet.

Group scaling – the devs are happy with where things landed, now focusing on issues such as True Sons and OP explosive ammo, and other similar faction specific issues.

The M1A Classic teamed up with the Crusader Shield and Focus is a combination that’s also under the microscope right now. This is a loadout that’s “crazy powerful” and it was never intended to be working the way it does. The buff should only work when looking through a scope. A fix is in the works, slated for later down the line.

Apparently, the sentiment among the community is that there isn’t a lot of variety in builds. Over-tuned named items are playing a part in this “we simply got the numbers wrong” says Kelly. Fox’s Prayer knee pads, Contractors gloves, and The Hollow Man mask – “the math isn’t correct on those items and they are over tuned” – they will address these issues in an upcoming update. These named items will still do what they are meant to but not as effectively. They have very powerful attribute rolls on brand sets that go part in parcel with the two meta-gun classes – LMGs and Rifles. 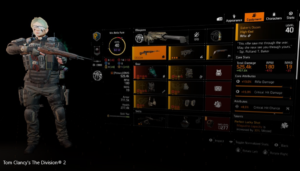 Assault Rifle lovers will be happy to hear that the Damage to Health attribute will be getting a buff along with various other under-performing named items such as:

Kelly advises that they are privy to big data and analytics and can see that there is a lot of variety in the loadouts the community is using:

They are not going to suddenly nerf the items that are being used by players as the “most common build pieces”, but they want to even things out. They will do their best to bring up the under-performers – “we did quick math and fudged a bit”, says Kelly.

They will be allowing players to loot the raid exclusive backpacks and chest pieces in the open world, so you won’t have to complete the raid for a chance at an Aces or Tip chest piece anymore – for example.

They acknowledge some exotics aren’t performing as well as intended and they are addressing the under-performers. The work from home situation is challenging but they are doing their best to address all issues and get these under-performers up to par.

A brief update was provided on Seasons:

Here’s the full stream for those of you who’d like to catch it:

Well that’s it for this week. Not a great deal that we didn’t already know however, for those using the M1A or Baker’s Dozen, Contractors gloves and Fox’s Prayer knees as the basis of your crit builds – things are going to change. So you might want to start exploring alternate pieces for those two pieces of gear. Many are running the Providence “The Sacrifice” chest piece with perfect Glass Cannon as opposed to Focus though, so depending on your build you may not feel a change at all.