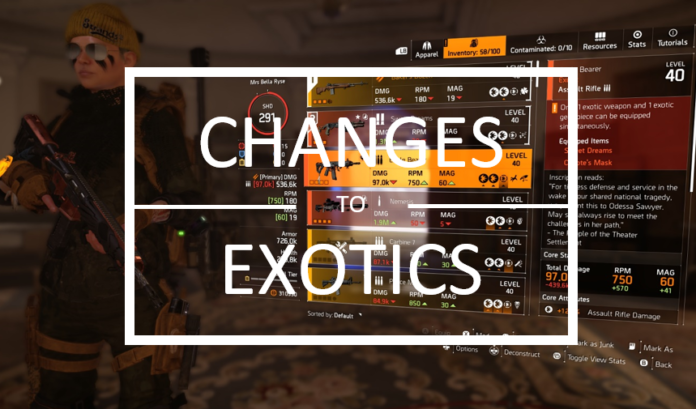 This week’s State of the Game brings news of Title Update 9, along with the recently discussed changes to exotics.

Title Update 9 will release on April 21st with full patch notes being made available closer to the date. One of the most interesting changes coming with the update is the ability to recalibrate exotic items. I go into further detail about that after the re-cap.

Some of the fixes noted by the devs to be coming in Title Update 9 include:

Obviously, it wouldn’t be a “Massive” update without balance changes, would it?

When they say “items like Hollow Man” you can add to that list the Contractor’s Gloves and the Fox’s Prayer knee pads. I know, I know, I’m not happy about it either!

Here’s the update on Season 1 provided this morning during the State of the Game livestream:

The key take away here is that you will be able to upgrade your level 30 exotics (weapons and gear) to level 40. Your existing blueprints for exotic items will automotically be converted to reconfiguration blueprints, which is what you will need to use for the upgrade.

You have the potential to reconfigure the item to ‘god roll’ status but no guarantee, with the potential re-rolled attribute being one that is “appropriate for the exotic’s level“.

According to Nikki Kuppens, Senior Game Designer, the exotic items are “not supposed to be the best thing out there” and are designed to promote different game play styles. 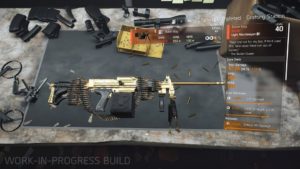 The devs have provided this warning before you start the reconfiguration process:

It can be risky to reconfigure an already powerful Exotic, as each individual attribute bar and the overall power of the item will be re-rolled. Everything between a god-roll and a weaker overall roll is possible, but it will always be above the guaranteed minimum.

Note: Your Global Difficulty will have no bearing on the reconfiguration process.

If you don’t currently have blueprints for exotic items that you wish to reconfigure you will be able to collect them, including those for the new items from the Warlords of New York expansion. Simply visit Inaya at the BOO and purchase the blueprints that you need (you need to own the exotic first though or the blueprint won’t be there for purchase).

The million dollar question (or exotic component question in this instance) is: How much will this reconfiguration process cost??

The reconfiguration process of an exotic item will cost 1 exotic component (as well as the generic crafting materials required, i.e. electronics, carbon fibre etc.). Keep in mind, the cap for exotic components is 20, so check how many you have before you start breaking down items for parts.

Deconstructing exotics will only give you 1 component, where as previously it was 2, so be sure you have a good think about what you want to reconfigure before you get started. Stock piling exotic items now before the update could prove quite beneficial down the track.