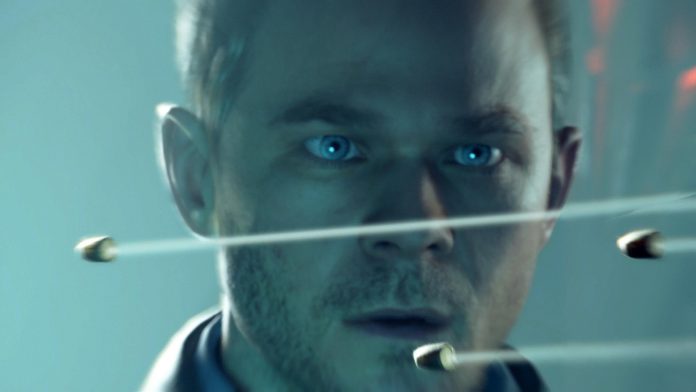 This is my experience on the Xbox One version of the game on hard difficulty. You may have a different experience depending on your difficulty and/or actions in the game. Everything you say, do, or intel you pick up, alters your experience. It’s very important you understand this up front.

If you are unable to watch the above video. here is a written version for you:

The time is 0430am and you, (the protagonist) Jack, are on your way to meet an old buddy named Paul at the University. He needs your help on one of his experiments. So like the good buddy you are you go to help out. This is when this roller coaster ride starts. He tells you he’s been working on this machine and needs your help with a demonstration. Paul goes on with the demonstration only to meet with himself coming out of a chamber in the middle of the lab. This is when you realize it’s a fully working time machine. In order to not have a ‘butterfly effect’ happen Paul says that his past self needs to go in the machine and his future self needs to stay in your time. Now this is when you really need to pay attention to the story because the breaks on this roller coaster are about to fall off.  (Remember the notice in the first paragraph of the review) Remedy has this uncanny way of telling a story. Their stories are so good that if their games were books you would need to keep reading to see what happens next. This is why you can’t put this game down; the story is so fantastic. From the protagonist Jack played by Shawn Ashmore, to the antagonist Aidan Gillen aka Little finger, the voice acting is over the top phenomenal. Not only that but the story includes a little miniseries in-between acts which was quite different. The actors in the miniseries do a great job in keeping you involved with the story. Honestly though, the main game story is so on point that it could have done without it. The only gripe I really had with miniseries is that they were so long. You don’t want to sit there and watch 30 minutes of a series right after you lay the smack down on some guys, just to add a different points of view to an already phenomenal story, at least I don’t. I want to get to the next act and keep the game going. It’s a good thing you can go back and watch it. I did on a few of them and I recommend others do as well. It is a great little miniseries that also alters based on your decisions in the game.

The best way I can describe the game play is that you are Max Payne with force powers. The powers are so much fun to use with the way you can freeze time, dash, pop a shield, and use your sonar vision. You have to learn how to use these skills in certain situations. If you think you can cover-shoot-cover without using powers guess again. The only way to survive is using your powers. You also have to find Chronon Sources, or as I like to call them Chrono Spheres to level up your abilities. Each level has them scattered about. The game is quite linear so you don’t have to go very far off of the beaten path to find them. I recommend you take the time to do this as you want to have your abilities beefed up especially for the final conflict. Visually the game is a hit and a miss. I understand that in just about every Remedy game they always go for this ‘cinematic’ feel but in some parts of the game there’s this fuzziness that makes the game look shoddy. In Some areas the color plate is just so dull and bland while in other areas the colors are bright and jumping at you or has that proper level of ‘grime’ if it’s in a dark and wet type of area. This was the same in both the cut-scenes and in-game. In-game facial animations are so crisp and clean in some areas, only later on to have this fuzz and film on it to make it look horrible. It’s like the system had a problem pushing out what it needed graphically for those segments.  You can see this in the review video above.

Okay I just want to put his out there, as fun and as thrilling as this game is, the game mechanics are not exactly the greatest. For example, climbing over things is horrible. I spent countless times trying to climb and vault over the easiest things. Like rails and small walls during fights to evade but nope, the game won’t let you do it. Want to climb a box? Sure if the devs want you to climb said box, if not you act like you will jump up only to tap the side and come back to the ground. This was the same for small walls rails etc. The only way to clear a small wall (if you have a landing area beyond) is to run and jump over. If you hit the top of the wall, you guessed it, you drop back on the ground. This was so frustrating. Jumping gaps was also a pain. Sometimes my torso would hit the ledge where in any other game the character would grab the rail, but nope not Jack, you hit the ledge then fall.  Additionally, for a “shooter” type of game your cover system is on the rails. You cannot understand how frustrating this is. Not only that but you can’t sprint when you want to, this is also on the rails. When the game does let you run, you have this light ‘frolicy’ jog. This jog will begin to haunt you in the later levels; because guess what YOUR MAX SPEED RUN IS THIS STUPID JOG. When all hell breaks lose you would think there would be a sense of urgency to get into cover but no, you have this light jog along with this auto cover system that makes the most basic fights seem so frustrating. Because of this on the rails type of system when you are at the last level it makes the boss seem like a unbeatable deity. There is a way to beat him and it’s not luck based. Look at the light, that’s all I’m saying. Another frustrating thing is the combat basics. For some reason you can’t hip fire but instead you have to ads. You get a sniper rifle but you can’t look down the scope. You hit left rigger only to have the cursor barely zoom in. You also can’t fire from cover. This would have been a great thing to have in the later levels. Also for some reason there is no standard melee. You have to UNLOCK melee as a power up. This had me so angry because the AI can melee at will if I’m close to them but I cannot. Look, I can deal with not being able to shoot while in cover, I can even deal with the fact that I can’t hip fire, touché’ -but to not be able to do a simple melee unless I unlock the special COME ON!! Remedy, do you remember a game called Max Payne 3 on 360? Yeah you could melee in that game but not in this “current gen” game. Melee should be a standard in every type of shooter game in my opinion – PERIOD!

Microsoft had been holding this exclusive title close to their chest and it’s been in hiding for a long time showing these glimpses of greatness in demos.

Do you get what’s advertised, a time bending thriller of a shooter? Yes.

Do you get the mind blowing visuals? Yes and no.

I give the game a 7.5 overall. If I were simply giving a review score just based on story I would easily give it a 9.5 – easily. The story is so gripping you are going to want to keep playing to see how everything unfolds. I can also see folks give it at least 2 to 3 play throughs not just for the extra intel and items but to see the alternate story lines. However, you can’t score a game based just on its story. The powers and the fighting sequences you have when you use them are AWESOME. Setting up time warp bombs, slowing guys down to drop crates on their heads, putting up energy shields that absorb bullets only to turn it into a bomb at will. All of this is super fun, however it’s the simple mechanics that are in just about every shooter that aren’t there.  The hip fire, cover fire, something as simple as vaulting over a waist high rail is an impossible task unless you are ‘frolic’ jogging towards it and that’s if the game lest you jog.  It seems they want to hold your hand when really they need to take the training wheels off. There are also tons of Easter Eggs, from Max Payne to Allan wake, even some Office space Easter eggs make it in. “YES I have my TPS reports”. If you are a Remedy fan you will love this game. If you are on the fence and you like games that have a gripping story with fantastic actors – this game is for you. If you are looking for a hard core shooter with all of the above elements – this isn’t the game you are looking for.