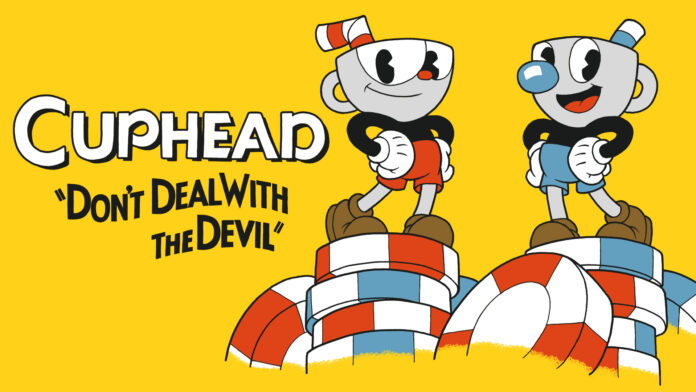 A couple of weeks ago, Studio MDHR (the developers behind Cuphead) did quite a number of us. On that same day, they announced a PS4 version of their beloved game and it was immediately available to play. This last tidbit was what really shook me. It instantly became a must-play game. I tried the initial version (on my original Xbox One), and I appreciated it. I don’t know if it’s because of this specific version, or my comfort with this controller, but still today, I am unable to finish it. The situation changed on PS4 though. So, the question is: what did I think of it, now that I finished it? In summary, it is a must-play title that every gamer must give a try, but you have to be aware of what journey you are embarking on. 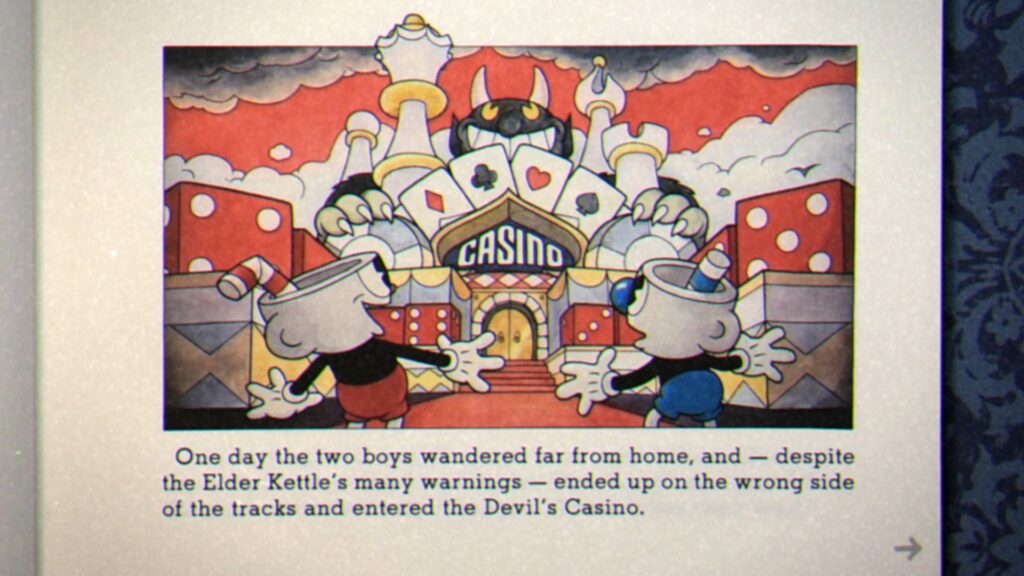 A dangerous bet with the devil

The story takes place on the Inkwell Isles, where 2 mischievous brothers (Cuphead and Mugman) wander from home and find the Devil’s Casino. They decide to enter and go play craps. Things go really well, so much that the Devil himself decides to go see them and place a bet. If they win this last round, they would earn the entire money the Casino owns; if they lose, the brothers would give him their soul. Of course, as good storytelling goes, they lose. After begging mercy from the Devil, he decides to make a pact with them. If they agree to go collect the “soul contracts” of all debtors, he might change his mind. This is where the gameplay starts for the heroes. You can play as either of them. It is only an aesthetic choice, it does not have gameplay impacts. 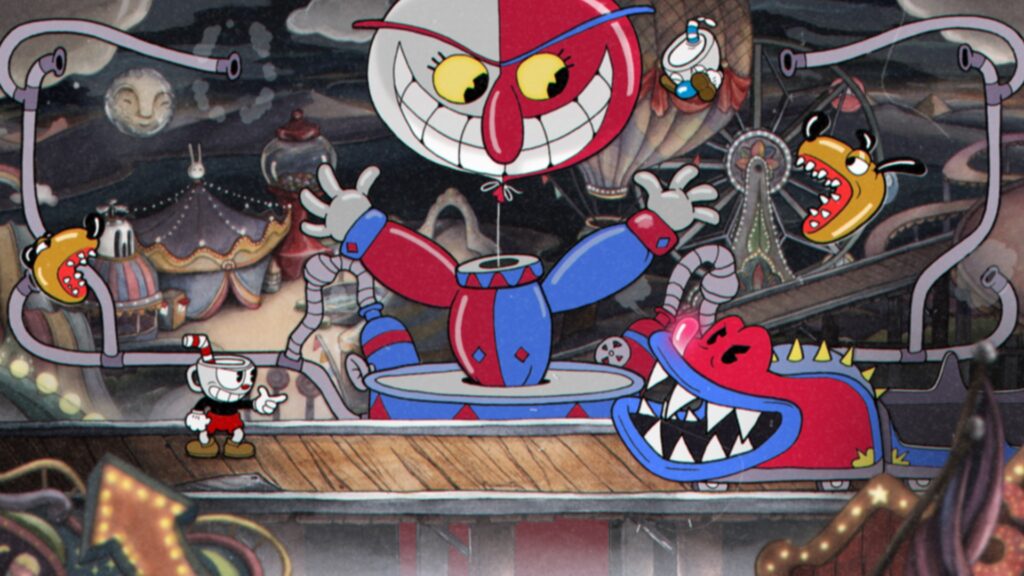 A “run and gun” adventure

Collecting those debtors is done through levels that could be interpreted as a “boss rush” mode. Most of the challenges are confronting them, and fight them. It is done mostly on foot, but some special fights are done piloting an airplane. By defeating them, you get their contract. It is done with the help of the weapon you start with, which is projectile-based. Additionally, throughout the adventure, you can obtain upgrades to make them more effective (powerful), or having a special effect (aiming), etc. For that, you need to collect coins. You can find them during another type of level (more on that later). Once you have some, there are shops that you can have access to which will allow you to purchase them. You can have a look at an example below. 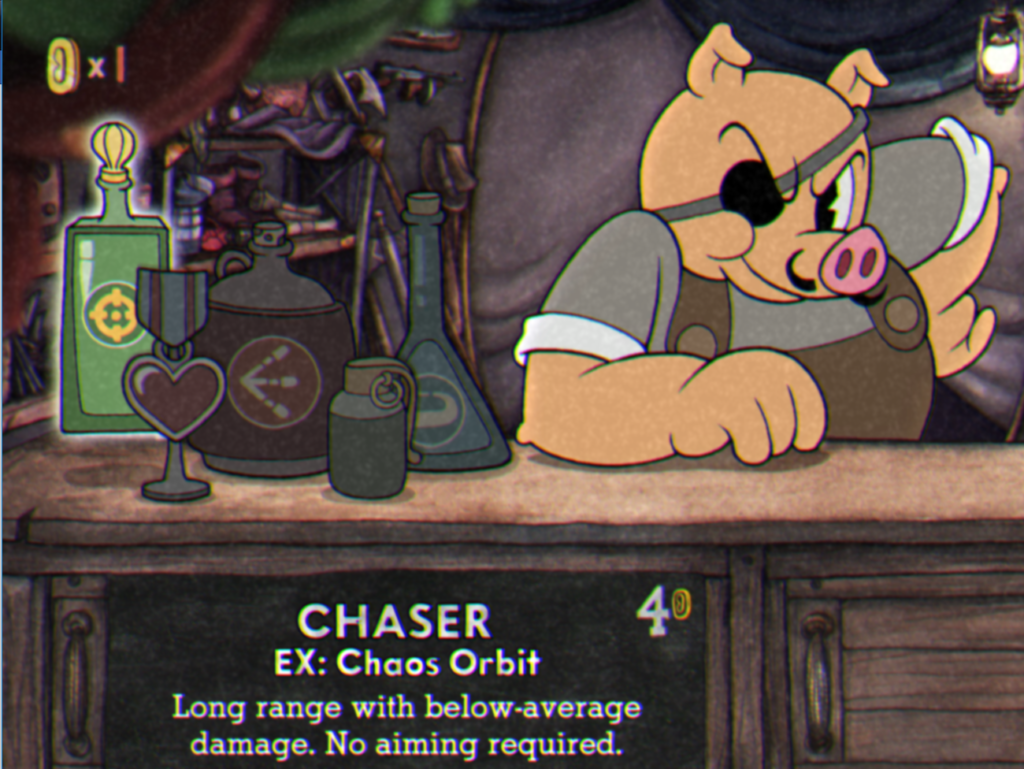 When you are not fighting against those bosses, you will be going through levels that are mostly action-platformer challenges. During those, you will have 5 coins per level, which are there to find and collect. There is a great variety of experiences that are included inside this title, which is a great aspect for an indie game. You also have some special optional levels consisting of parrying tasks. If you find them in the world map and succeed, it allows you to obtain special power moves. 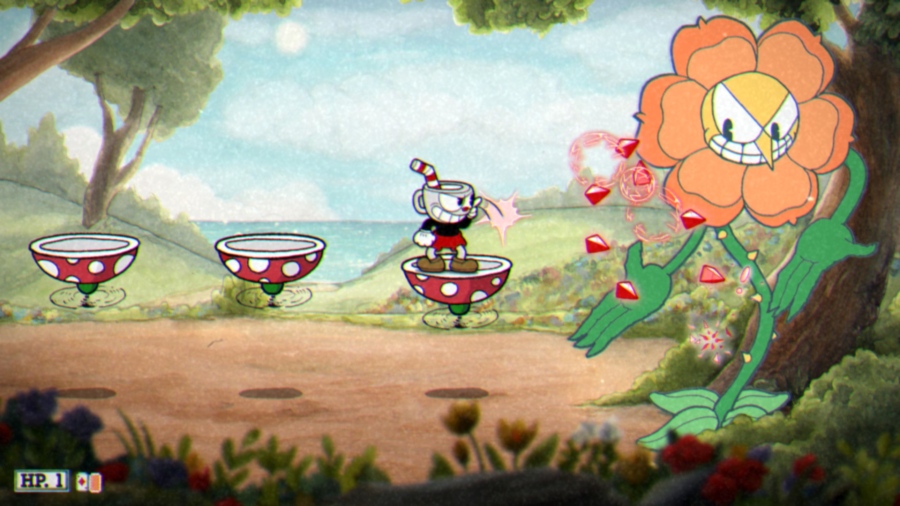 As you fight your way around, you are accumulating a special kind of energy, which can be stored and seen at the bottom left of the screen as playing cards (an example is displayed just above). At any given time, you can own a maximum of 5 cards. When you use a special move, if you are not full, you have a special ability depending on the weapon. If you are full, you are then using your entire reserve and deploying this super move, which can be very beneficial during your level. Managing them and using them at a proper time is part of the experience.  You can only equip 2 power-ups, a super, and a charm (another type of power-up that can be obtained through the shop) at the same time. 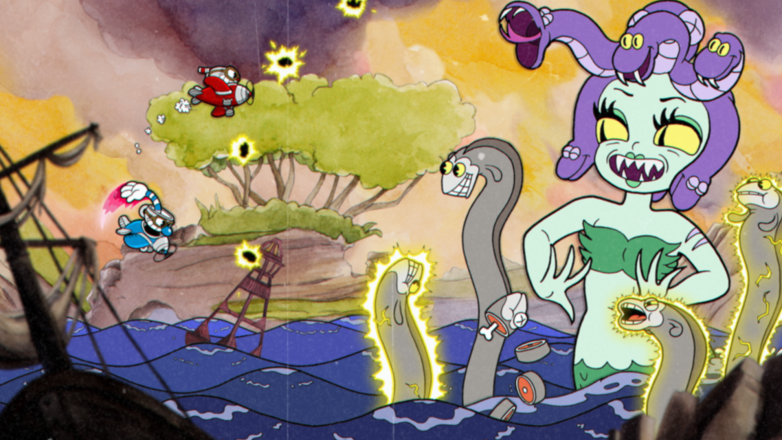 I didn’t talk about challenges for any reason

It is the most important warning I need to give about this game: it is really quite a challenge! As I am writing these lines, according to the trophies, only 6.3% of people actually finished the game on the Normal difficulty. There are 3 worlds, plus a big finale in 2 steps. It makes a total of about 2 dozen bosses. You have to add about half a dozen of platformer levels. In total, I probably died about 100 times. You need a lot of patience and although levels take a little while to load, once you die, you don’t have to wait for any load screens. For a “Dark Souls”-y kind of challenge, I appreciated the ability to quickly start where I died.

One additional thing: you have probably noticed that in some of the screenshots I have included in this review, you can see both protagonists at the same time. You can play the game cooperatively, but only locally. There is no online coop mode. On PS4, you can have access to the shareplay functionality of the console, which circumvents this limitation. Although I didn’t try this feature out, you should be aware that it’s possible to do it. 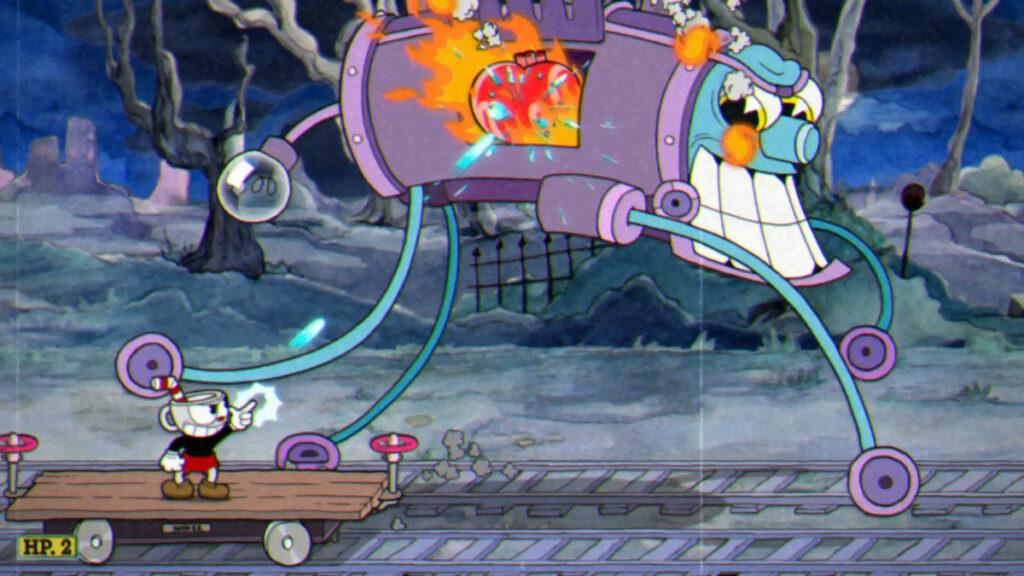 In terms of artistry, this title is, simply put, awesome. Everything is drawn and animated like it is an animated movie from the beginning of the 20th century. They went as far as inserting deterioration like what you can see in an old movie played from a VHS or even pre-VHS era. A crazy amount of work has been done to give it this look, and it is, to me, one of the best looking games of this generation.

The music has been given the same love, with an homage to jazz music, which was omnipresent in this kind of old music. It shows that the team cared a lot about the entire package. There is absolutely nothing bad that I can think of regarding the artistic vision of this game. Kudos to the entire team. 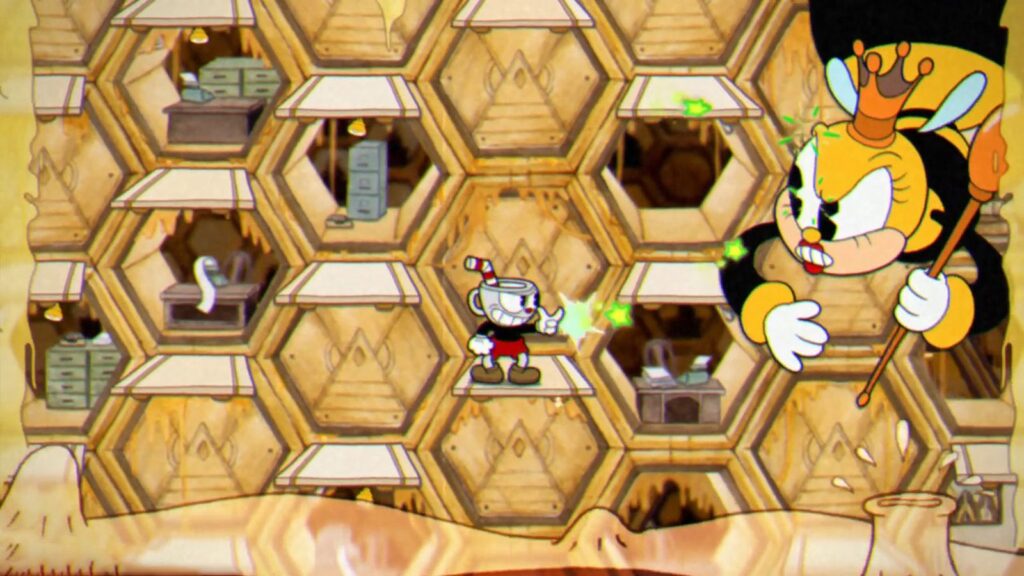 For many gamers, just finishing the game will be quite the accomplishment. If you dare though, there are a lot of things you can try to tackle.

First, in your first playthrough, every level can be played in Simple or Regular mode, except the finale, which can only be played in Regular. After each level, the game evaluates you, according to the time it took to finish it, the HP level you have, the amount of parry you did, etc. Getting an “A” for every level is quite difficult, which is necessary if you are a trophy hunter.

After your first playthrough, you unlock an Expert level of difficulty. Again, replaying this title on this level is necessary if you want to try to obtain the Platinum trophy, which only 1% of the gamers actually obtain (as I’m writing this article).

There are even additional challenges, like trying to obtain a black and white mode, but I’m not going any further, I will let you hunt down the specifics if they interest you.

So, as I said, it is very highly replayable, but hold on to your controllers, because some of the content is very demanding in skills.

In conclusion, the fact that Cuphead can finally be on PlayStation 4 is just a blessing. This game is a must-play title. Congratulations to Studio MDHR for a job well done, and let’s hope their future projects will be as successful as this one.