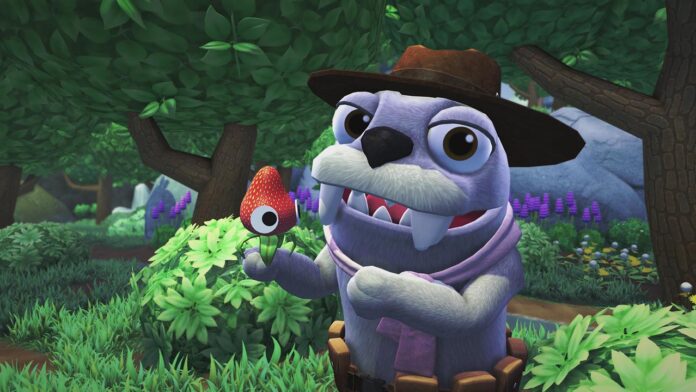 Since its reveal last summer, Young Horses really made a name for themselves with a trailer of their new game, called Bugsnax. It included everything needed to be a phenomenon: beautiful graphics, funny writing, and a catchy song, which really became viral in the PlayStation gamers circles. The developers succeeded in keeping pretty much everything cryptic, from the premise of the story to the actual full gameplay. With such a spotlight, from Internet viewership to PlayStation 5, does the game deliver? Despite its flaws, its warmth and authenticity really keep you playing until the end. 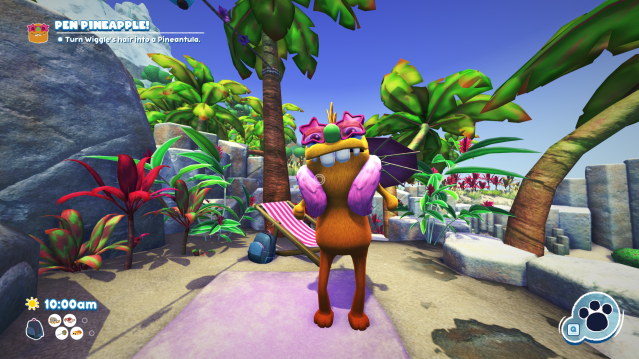 Snaktooth Island – A paradise to explore?

You play the game as a reporter. An explorer called Lizbert Megafig sends you a film strip, asking you to come to Snaktooth Island, to join her exploring and investigate the creatures inhabiting the location, called “bugsnax”. What are they exactly? Why are people so invested in them, and addicted to them? When someone eats one, why can it transform a body part into what you ate? The investigation allows you to answer those questions.

The joy of the game is to know the less information possible beforehand and discover what is going on. The characters you meet are charming. The plot twists are surprising. Furthermore, the game is not 100% comedy: there are surprisingly serious conversations that occurred between the island’s inhabitants. One thing important to mention: do not let the animation style distract from the actual content. It can be really enjoyed as a family title (even if it is a single-player only game). At one point though, near the end, a dark twist happens until the end. It becomes never too much, and it fits the story perfectly. It is a happy surprise I never suspected. 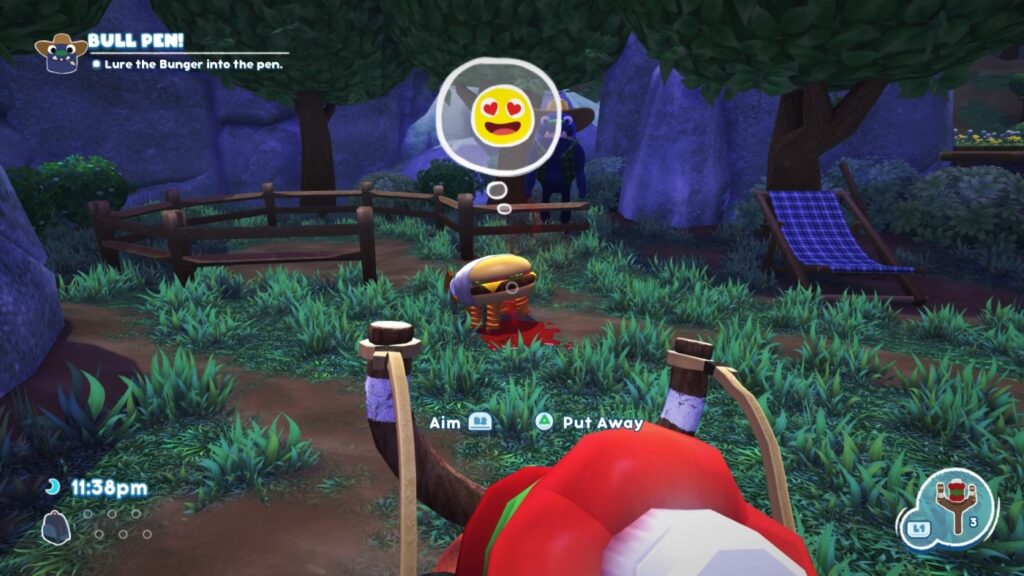 It doesn’t take long for the game to present you with the main gameplay loop of this title. For the different characters you meet, you will have to capture different kinds of bugsnax. You will have access to gadgets that will be given to you, with a combination of sauces. Yes, you read properly. Sauces are an integral part of capturing those creatures.

The first time you meet one of the 100 creatures, you can activate a camera scan using R3, and a successful usage will create an entry in your bugpedia. Each of them will have a small description, qualifiers/categories, and will often tell you what other creature and/or sauces it loves and hates. Each piece of information can hint you towards a solution on how to capture it. There is no absolute unique way to capture the bugsnax. It behaves like an open-box: you can do what you want and play with the physics engine of the game. Some environments also behave like a puzzle element, in which you have to analyze properly how to capture what and where. The creativity is fantastic and the pleasure of succeeding to capture some of the creatures feels like a victory. 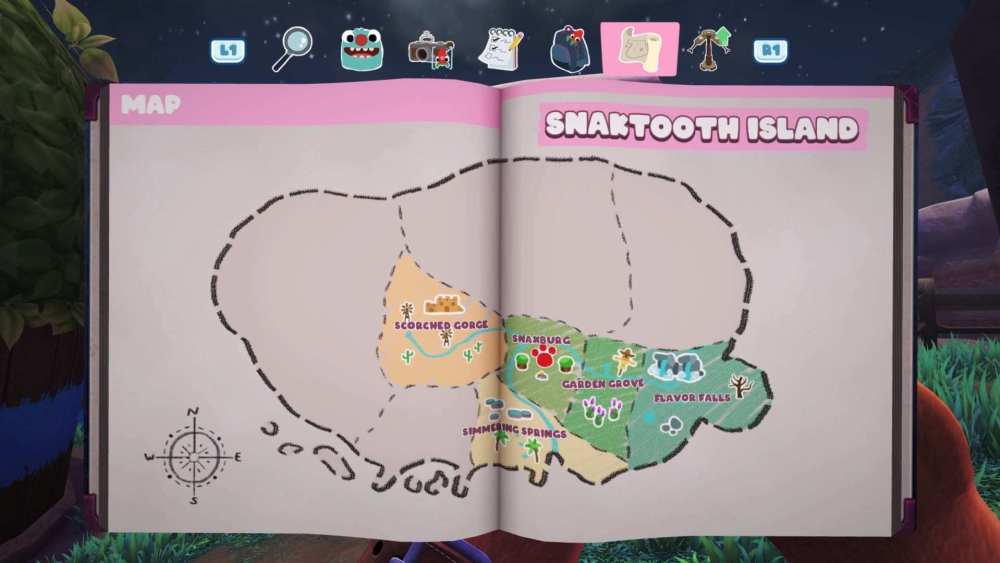 While capturing bugsnax is a lot of fun, getting to them can sometimes be cumbersome. The mission structure will often make you travel from one side of the map to the other. There are only 8 regions in Snaktooth Island, and the loading times are only happening while changing location. Unfortunately, on PlayStation 4, that’s where the problem resides. Those loading times can pretty much last from 10 to 20 seconds every time. Also, there is no instant travel between regions. For example, if we look at the map above, just going from Scorched Gorge to Flavor Falls will not take you below 30 seconds of loading time, without counting the time to actually traverse the region. It is an unfortunate omission. It would have helped a lot. 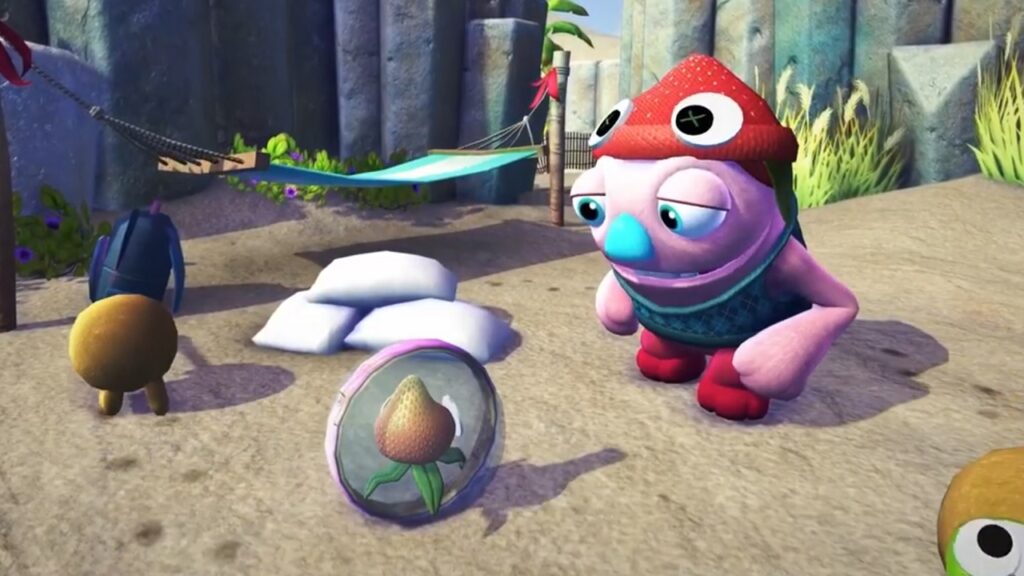 Commitment to a vision

The developers clearly had a vision of how the game should look, play, and feel. They committed to it 100% and it makes the game ooze with charm and authenticity. The characters look like animated versions of Sesame Street-like inhabitants. The island just feels right and believable for this fantastic world. The bugsnax design is pretty much as creative as you can see in a Pokemon game, though all based on food items. From the walking strawberry (called strabby) to the flying mozzarella pizza (called Mothza Supreme), originality is very apparent.

Everything sound wise also just fits the world perfectly. The characters in Bugsnax talk like Pokemon by repeating their name in different tones. You also hear them through the controller once you capture them. In the music score department, each region and event has its own track, subtle and not talking you out of the experience. Finally, of course, let’s not forget about the song that became viral with the announcement trailer. The British indie-pop band called Kero Kero Bonito is behind the interpretation, and the song “It’s Bugsnax” can even be purchased and listened to on music streaming services (like Spotify). You can have a listen to the song below.

People are saying that the game can be finished around 4 to hours 6. I found this number really too small. To fully experience a game like this one, you have to take to explore fully and, worthy of a Pokemon-style title, you “gotta catch ’em all”! The Platinum trophy can also be obtained with only one playthrough, which is really nice. It took me around 15 hours to get it, which is great value for a game of this price.

Purchasing Young Horse’s game on PS4 gives you, for no additional cost, a playable copy of PS5. The reverse is not true though. The same thing happens with the PS+ game selection for November 2020: it provides you with a PS5 version of the game, not the PS4 one. 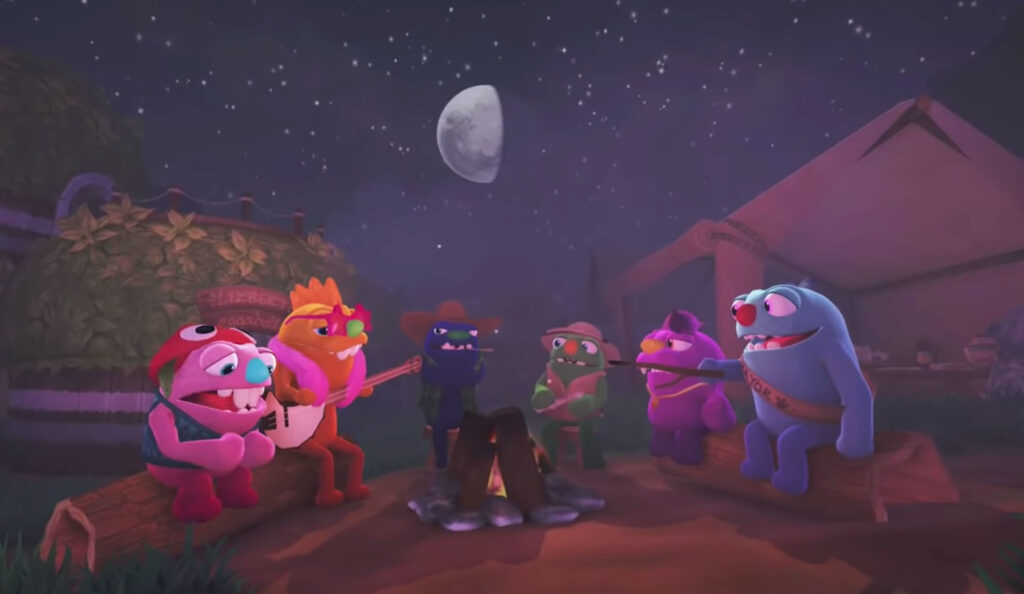 After the success of Octodad: Dadliest Catch, Young Horse succeeded in creating another game full of originality and creativity. Despite its few technical shortcomings, it is worth playing on Sony’s current-gen console. The developers created another fantastic world full of color, warmth, and pleasure. Despite the craziness that has been 2020 and this year’s list of quality games, this game is worth taking the time to experience, but there’s definitely nothing like that on PlayStation.