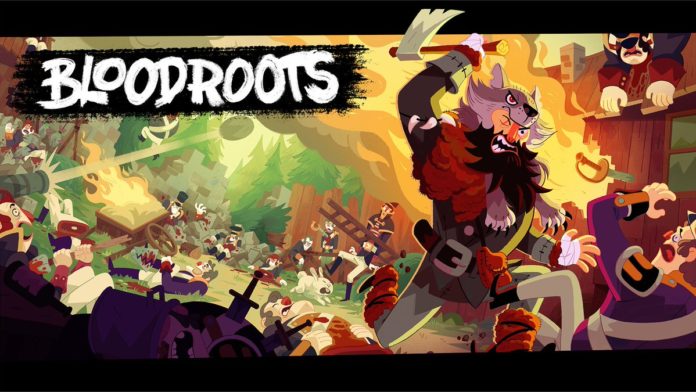 Every year, during Montreal’s ComicCon, I have the opportunity to try out indie videogames, many of those being developed in my area. At the PlayStation booth, I tried out this title: Bloodroots, a brawler game that caught my eye for its action and very stylish art style. It is also a title that I’ve heard a lot during Kinda Funny’s multiple podcasts. I loved what I tried, so I just had to review it when it comes out. Was I happy with the result? Read on to find out! 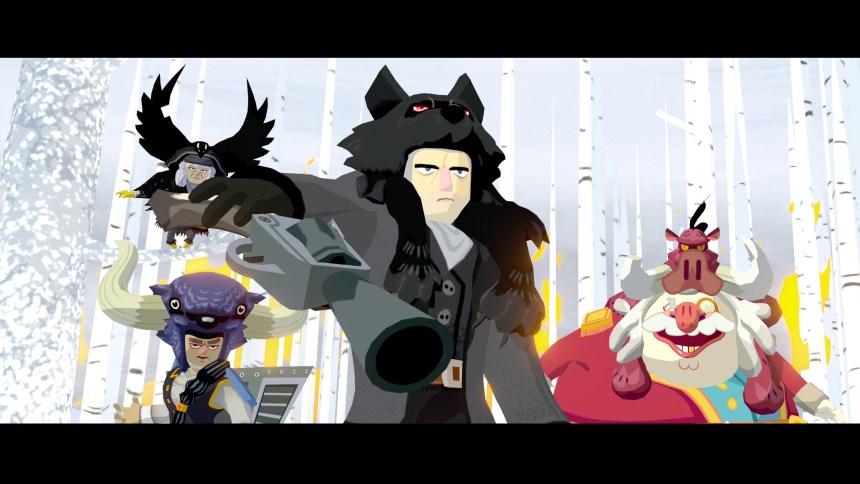 A tale of revenge

The story is fairly simple: you were killed by a trio of thugs and you want to get revenge. Mysteriously, you get resurrected and you want to avenge yourself. While it is simple enough in concept, the creators took the time to write a story that is very predictable, but very enjoyable. You get to learn why they wanted you dead, while you search for every culprit and do yourself justice. There is also a second layer of content regarding the purpose of revenge and violence. It’s a nice touch that I appreciated. 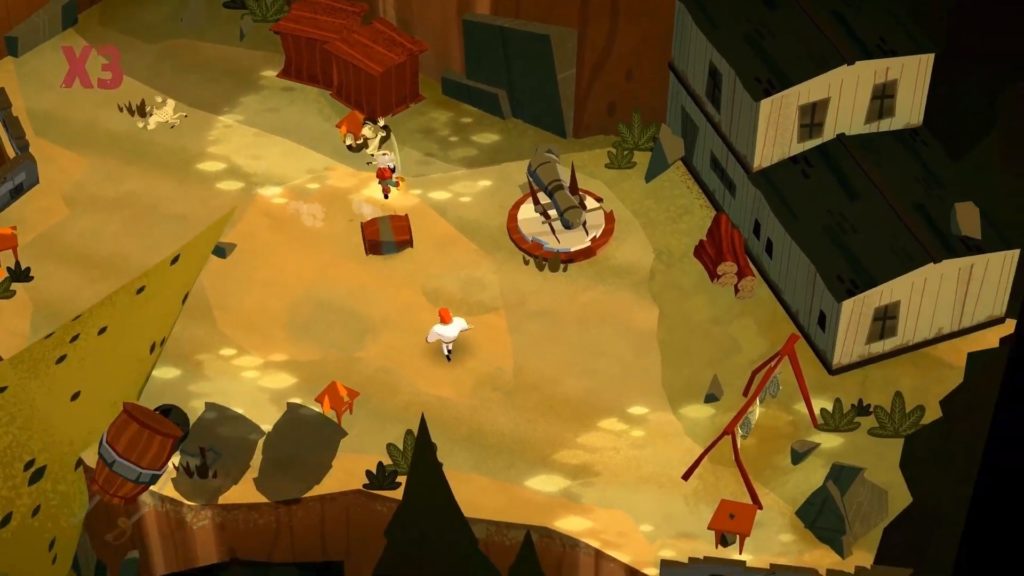 As we can see in the images I included with this review, the game is full of style. Despite its simplicity in the design, it fits the context of the game perfectly. It is not flamboyant and does not detract from the purpose of supporting the story and gameplay mechanics. It looks good and everything is functional. The music and sound walk hand in hand with the graphics, for a package that even if it’s not the most memorable, nothing is out of place. 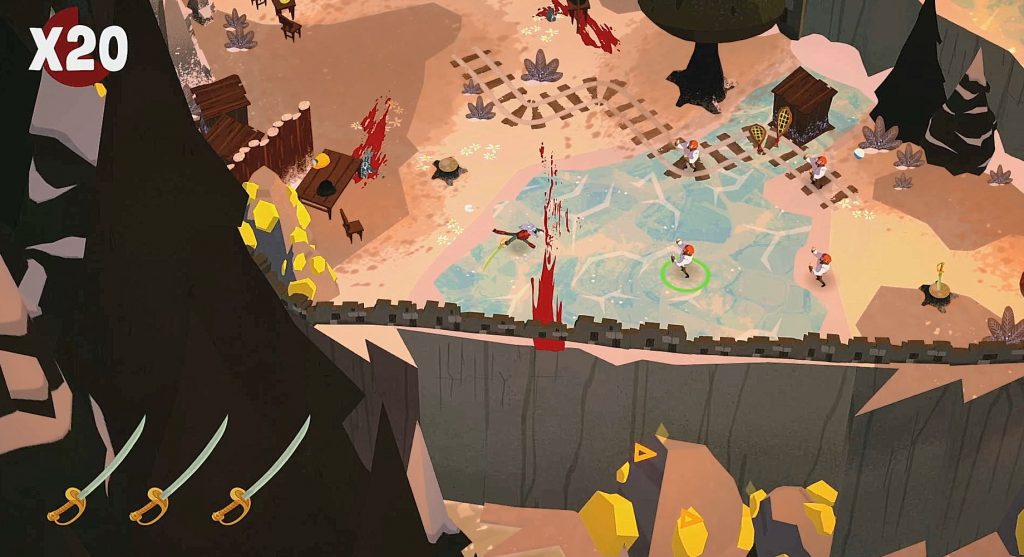 Almost everything is a weapon

Every aspect brings the action forward, resulting in quite a relentless experience. Once you start a level, if you die, you respawn instantly. The respawn sections mostly don’t hinder your progress, trying to bring you back to the action with the less downtime possible. The rhythm is so fast that in some intense sections, you almost feel out of breath. You have to think fast, and to kill all of the enemies (which is always the end goal), there are multiple ways to do so. The replayability is mostly based on something I have never seen exploited this much in a game.

Wolf uses almost every kind of object as a weapon. There are either located directly on the ground or can be obtained by destroying some elements of the decor. The variety of the arsenal is crazy. It goes from a chain that looks like a Chain Chomp (seen in the image above), to splinters of wood. There are even laser guns and a shotgun that looks like a bayonet. The developers put their creativity to the tests with some objects, like a huge fish that you put on top of the enemy’s head and carrots! With this much variety, it never gets boring and seeing the multiple ways Wolf uses this object is part of the fun. A special cinematic finisher move is also shown on the last enemy of a section, and it varies depending on which object you use. A lot of time was spent on this aspect I’m sure. It makes combat alive and never boring. 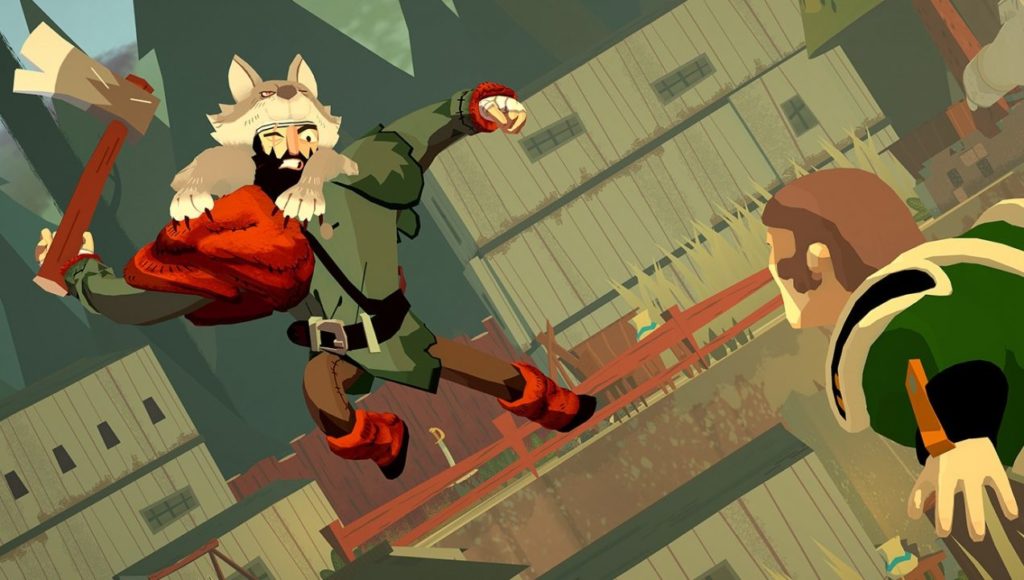 If a player doesn’t know this before tackling Bloodroots, he will learn it real fast: it is not an easy game! The dozen or so levels of the game put my reflexes to the test. You will die a lot! Some people even nickname this game the “Dark Souls of brawlers”. During my 15 hours or so of gameplay, I surely died more than 500 times. The challenge mostly comes from the fact that if an enemy hits you, you instantly die. If you hit an enemy, he mostly dies on contact, but it depends on many factors like armor, the weapon you use, etc. The combination of all those gameplay elements sometimes feels like a rhythm game. You need to learn what to do, how to do it and in which order. The more you play, the more you learn about patterns and things that work against which type of enemies. It almost feels like a rogue-like game. Just finishing a level feels like an accomplishment. According to the game’s trophies, at the moment of writing this review, only 12.6% of people finished it. I was proud of myself when I finished it. 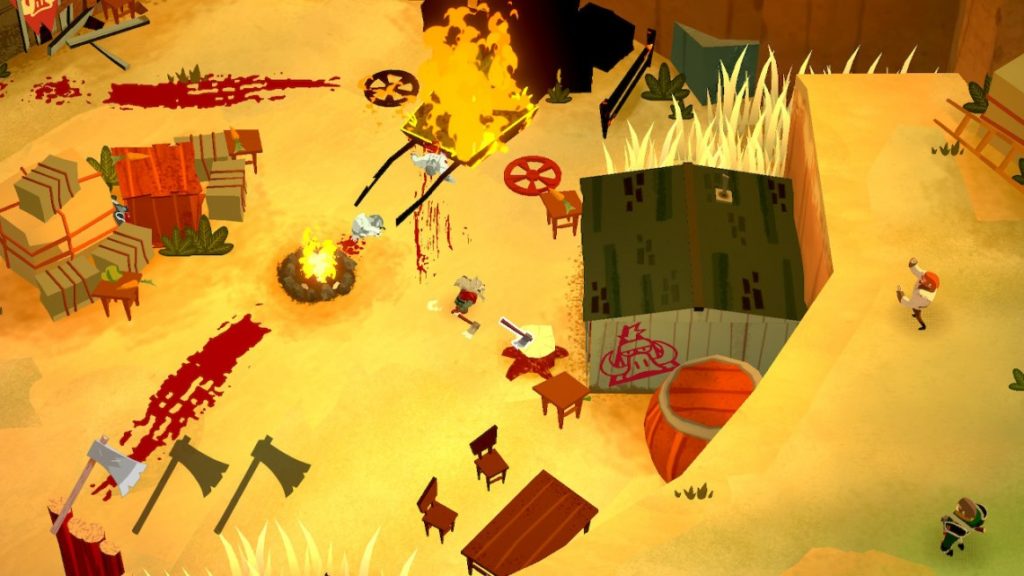 Not everything was positive though

I have a lot of kinds to say about Bloodroots, but not everything is positive though. Some technical issues tarnished my experience with the game. I had situations, for example, where I couldn’t do a multistage battle easily, because every time it loaded the second stage, some visual glitches and texture problems prevented me from seeing the character, and it made me die (after respawning, the problems were solved).

The worst problem happened during the game’s final battle. During the second stage of the battle, I had to press on the Home button of the DualShock 4 to go to my media bar. When I went back to the game, a red screen appeared, and the only thing I could do was close the application. When I loaded the game back, I even had to replay the entire battle. It happened to me 2 times in a row. I was really angry. I have a busy life with a girlfriend and kids, so interruptions are something that I need to deal with daily. This bug was a reminder for me that sometimes, common lifetime situations can lead to bad discoveries while playing videogames. 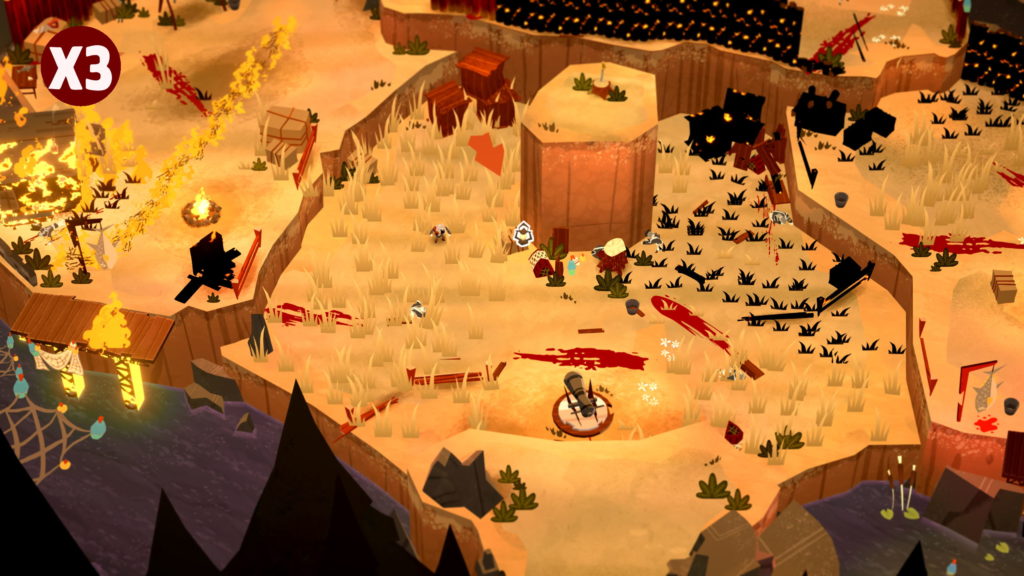 Worthy of your time

In summary, Bloodroots is worthy of playing, despite its shortcomings. The relentless action always keeps you on your toes and the surprises just make you want to continue playing. If you like games like Hotline Miami, you will enjoy the challenges that the developers put in your way. Time to get your revenge, Wolf!