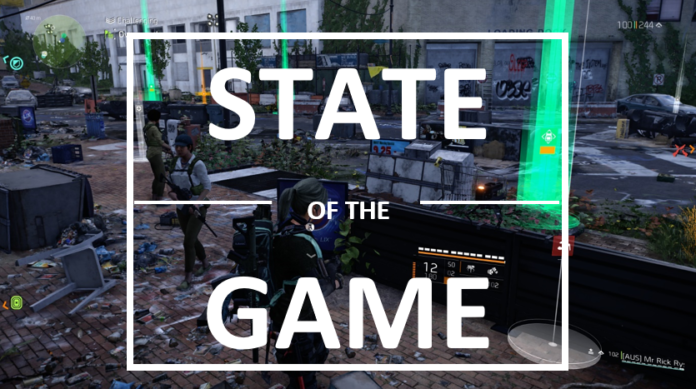 This week’s State of the Game has been cancelled due to personal reasons within the dev team, instead a brief update was provided about the following:

As we are aware, the accounts that were suspended last week for utilizing the DPS glitch, have been reinstated, with progress reset to March 17th. The last word being provided by the dev team on this is they “consider this action final“.

That’s all good and well however this hasn’t had the desired effect. A few issues, just to list some, with this process include:

For a process that the devs have “full confidence in“, is now “considered final“, and was implemented on a case by case basis, I find this concerning.

Directly from the dev team:

Title Update 8.5 was released yesterday, introducing a number of fixes and balancing changes. Full patch notes can be found on our Ubisoft’s official forums.

The next update in the pipeline is Title Update 9, tentatively scheduled for late April. TU9 will continue the ongoing work towards improved game health and balancing changes based on community feedback. As we get closer to its release, we will be sharing all the details on what to expect, but as a small tease, we can confirm that it will introduce the ability to upgrade exotics to Level 40.

It’s at this point that I say to you “I hope you listened some weeks ago when I told you not to deconstruct your level 30 exotics!“. For those who didn’t listen – enjoy the farming.

For players who don’t have the time to re-farm the exotics, this will be most useful. At least something that we achieved during year one will prove to still be relevant in the game – right?!

For information about Season 1 and the apparel event please click here.

So that’s it for this week. TU9 is still on track for release in late April with no date yet provided, and the dev team is still mainly working from home.