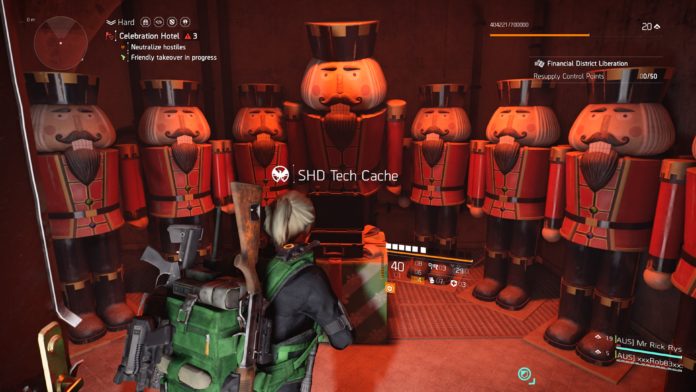 Maintenance occurred last night for The Division 2. Like most week’s, we all had a list of core issues that we hoped would be fixed, alas they were not. Not too worry though, there’s always tonight’s maintenance, right? You laugh but we have had several lots maintenance in the past week, I won’t be surprised if we get more tonight.

Whilst all are annoying issues, the problem with not being able to revive someone at all when the hive fails, strikes me as being a more immediate issue. Or being delta’ed from the servers every 15 minutes – also not favorable.

The devs have provided a list of issues that they are currently investigating for fixes, which includes:

Players are also experiencing difficulties with the Manhunt. Whilst there is a notation that lets you know if you change world difficulty during your progress it will reset you to the start, it’s not very clear and many players are missing it.

Once you start the manhunt be sure to complete it on the same world difficulty. If you start on CHALLENGING but then back it down to HARD half way through, your progress will reset. My advice is if you are still pulling a build together and working alone, don’t set your difficulty any higher than HARD. This will make completing the Manhunt achievable for you. You can then complete it again on a higher difficulty if you wish.

Here’s the update from the devs on the matter:

Season 1 is now underway with Neptune being your first target. To locate him you need to complete the allocated 4 areas of activity, each with 3 Control Points, 1 Bounty and 1 Main Mission. These are all located in Neptune’s district, which you can find via the Manhunt tab. During the first week that all targets are active you will receive double XP.

Once you have defeated all targets you will then be able to hunt down the Prime Target. Completion of all 5 targets will earn you the EMP Sticky skill variant.

If I don’t complete the Manhunt is there another way to gain access to the EMP Sticky skill variant?

Yes, later on that variant will be available by completing other in-game tasks which have not yet been defined.

What rewards do I get from completing the Manhunts?

Some items will be awarded during the manhunt, the rest can be acquired by completing Season 1.

The devs have advised that they have looked into the complaints from the community that the NPCs in New York are too OP, and agree that changes need to be made.

The changes they are working on implementing are:

What needs to be kept in mind is that this is basically a completely new game when in New York. The gear is different, the factions are new or enhanced, and your build is still under construction. You can’t expect to run into a HEROIC mission with a build you made 5 minutes ago and have no difficulties. You need to step up the difficulty as you continue to refine your build. This is a good thing – we don’t need to be mastering everything on HEROIC 1 week after release.

There are more planned balance adjustments on the way though, however HARD mode stands to be left where it is.

Challenge mode however, is getting a nerf, which is an absolute shame. The development team have said that “after observing player performance, they’ve concluded that it’s overtuned. Challenge was created for players with “perfect” builds, but this limits build diversity, so it’s very likely that Challenge will be adjusted down a little bit.”

CHALLENGE mode does NOT require perfect builds. It’s a walk in the park if you don’t run in all Chuck Norris style spraying your gun from left to right. Use a strategic approach and CHALLENGE mode is anything but that. What a shame that they are nerfing it when the game is only just now beginning to have an element of ‘challenge’ to it once again.

Other planned balancing changes include:

As always, it’s great to see the continued support and maintenance from the dev team. It would be even better if the changes and scaling nerfs weren’t made to constantly cater to new comers though, some of us have been here since day one and paid full price for everything.

Looking for some help with your builds or understanding the changes made with Title Update 8? Here are a few links that will assist you: