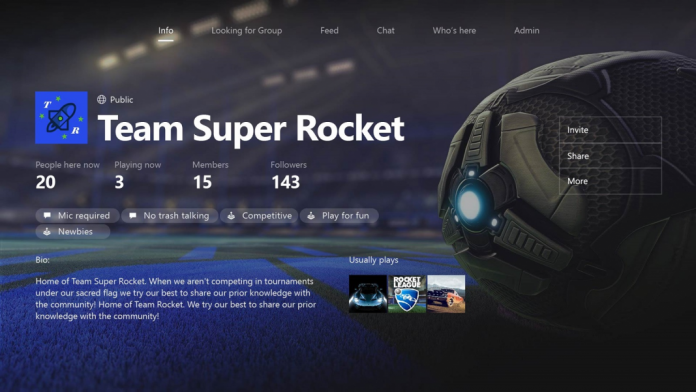 At E3 2016 Microsoft announced that they were working on effectively bringing Clubs, Looking for Group (LFG) and Arena to Xbox Live.

Well today the company announced via Xbox Wire that Xbox One Preview Program members can now experience Clubs and LFG features in the newest preview build, which is rolling out today. Arena, which is Xbox Ones online tournaments platform is absent from this preview build but Xbox Partner Group Program Manager, Scott Henson says more news on Arena is on the way in coming weeks.

Clubs and Looking for Groups are sure to be welcome additions to the Xbox Live service as they are both platforms built with the expressed idea of allowing gamers to find one another easily.

Clubs are user-created and managed groups with a focus on growing the community by helping gamers meet like minded Xbox gamers, who may share and love the same games, and experiences as you. Anyone can create or join a Club with the ability to set up parties, play games, and share content.

Looking for Group or (LFG) acts as something of a gaming “want-ad” where gamers can elicit the help of the community by posting particular gaming wants and needs. The idea here is to be able to find other gamers to play. Let’s say you need teammates to run co-op missions with, or help with elusive achievements or maybe you just want to enlist your services and help out others. This can all be done within LFG.

Microsoft also announced that Gamersore Leaderboards will be receiving an update and will now be “faster and more reliable”. Also, the leaderboards will now reset at the beginning of each month instead of the usual 30-day rolling period.

Last but certainly not least, preview members will also be able to try out the new Emojis for the Xbox One virtual keyboard.