Having trouble keeping up with all the gaming news flying off the RGM news desk? Don’t worry, so am I. To help you stay up to date with the big news stories from throughout the week we have put together a brief re-cap of the stories we know you will want to the news about.

So to get things started, Original Xbox titles could be next for Backward Compatibility on Xbox One

It’s all about the Xbox at the moment, with the news that the Xbox One is outselling the PS4 for the third month running, another boost to the Xbox community could be this interesting little comment from Xbox Head, Phil Spencer, on Twitter….

We haven't ruled it out but we aren't working on it right now. I'd like to find the time to do it.

These are just a few of the great original Xbox games that you could potentially play again, but I know that I’ll have missed a few – so tell us what you’d like to see in the comments below, the RGM Forums or on Twitter.

Next up we have: Steam To Add New DualShock 4 Features

In more news coming out of the Steam Dev Days event, added support for the DualShock 4 controller will be launched soon.

At the event, Jeff Bellinghauser was co-presenting with Lars Doucet, who had this to say:

“Believe it or not, when you use the PS4 Controller through the Steam API, it’s exactly the same as a Steam Controller.”

Because of the similarity in the controller structure, the DualShock 4 will be one of the first controllers they add to Steam functionality.

Two of the added features will be utilization of the touchpad and the gyroscopic sensor built into the controller.

Will you be using your DualShock 4 on Steam? Let us know in the comments or on the RGM forums!

We can’t forget to mention: Phil Spencer wants ALL Xbox 360 games backwards compatible on Xbox One

Now THAT sounds like my kind of plan! Phil Spencer, while responding to a fan’s question on whether Black Ops 2 would be made available via backwards compatibility, Spencer said:

“I like the progress on BC. We’d like to have all and work on 3P games is always a partnership with publisher.” 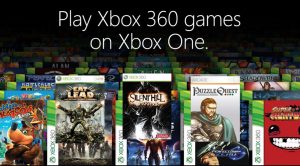 Although it was always implied that they’d go for a complete conversion of the 360 library, having confirmation that the head of Xbox has the same goal is certainly comforting. It does, however, seem that third-party developers will be the biggest road block to this goal though, as they’ve already proven to be somewhat stubborn in regards to their products being made available to Xbox players for free (if they already have the game).

The most stubborn of all has been Activision and its refusal to make Call of Duty backwards compatible. This is why Black Ops 2 remains at the top of the most-requested list to become BC, yet it hasn’t made that transition.

It doesn’t help that PlayStation is doing their Now program where players purchase older games through a subscription service, as it represents a means for these third-party developers to potentially make more money rather than just make their games freely available to X1 players.

Still, there IS hope. Red Dead Redemption IP holders were initially hesitant to allow it to be added to the program, but after a bit of a waiting period, it too was made available.

Right now, with over 250+ BC titles available, the system has proven to be a success that keeps on developing and adding more great titles to its library. For now, we wait and see if Phil Spencer can reach his goal of every game being made available on both systems. I’m sure every gamer is hoping they succeed too.

Have you taken advantage of Xbox One’s backwards compatibility? What title do you want to see next? Let us know in the comments!

It’s that tome of the month when: Gaming Rivalries – Xbox One outsells PS4 for third consecutive month in US

Nintendo or Sega? Street Fighter or Mortal Kombat? PC or Console? Call of Duty or Battlefield? Forza or Gran Turismo? Commodore 64 or ZX Spectrum? These are some of the rivalries that take place and have taken place since the dawn of gaming time, but I think it’s fair to say that all of these rivalries take a back seat when the argument over Xbox or PlayStation rears its head.

This isn’t a new rivalry either, and it’s unlikely to go away soon. It tentatively started between the original Xbox and the then undisputed king of the consoles, the PlayStation 2. Microsoft were the new kids on the block, and Sony were masters of all they surveyed.

N64? Dreamcast? They bowed to the might of the original PlayStation which sold over 100 million units world-wide, compared to the just over 40 million units between the latter 2 combined. And then in 2000 Sony released the PlayStation 2 – officially the best selling games console of all time, with over 155 million units being shipped world-wide, and their final servers only recently being turned off. But this was when Microsoft entered the console party, with their original Xbox and tried to fill the vacuum left by Sega’s demise after the failure of the Dreamcast, and Nintendo’s then falling popularity.

Although they gained a foothold, they could only sell approximately 24 million units, with Sony seemingly turning the console wars that were dominated by school-yard arguments in the 90’s between Sega and Nintendo, into a one-horse race.

That is until 2005, when Microsoft pushed hard and released the Xbox 360. Many were converted and with Sony not releasing their PlayStation 3 console until a year later, Microsoft were able to gain a valuable beachhead in what would be a war that continues to this day – Xbox vs PlayStation.

While there are “fanboys” on both sides, I think a lot of serious gamers saw the benefits and pros of each console, and felt that the idea that there can be only one console to rule them all is a little…silly to say the least. But that certainly doesn’t stop Microsoft and Sony in engaging in this war, much like it doesn’t stop Coca Cola and Pepsi from doing the same thing. (Pepsi – yum, Coca Cola – yum: get over it)

I mean, Microsoft didn’t want to name their second console the Xbox 2 as it would look as though it’s a generation behind the PlayStation 3, it’s these little subliminal things that they do which fuels the “war” and at the end of the day, for both companies, it’s all about one thing, the sales.

PlayStation 3 and Xbox 360 were very evenly matched, to the point that their world-wide sales are most likely probably too close to call with both consoles hitting around the 84 million mark by 2013. Which is when the current gen of consoles was released, the new dawn in the war between Microsoft and Sony.

……….and it didn’t start well for Microsoft.

Microsoft seemed to lag behind in every area, with rumors of needing to be online constantly and at least “check-in” once every 24 hours to your Xbox Live Account, among other things which Sony pounced on repeatedly and forced back-tracking statements and the like from the Xbox hierarchy. This led to the Sony starting this latest round of console wars in pole position. And to date, Sony have still sold more consoles than their Microsoft opponents.

However, as Nobel Prize winning legend, Bob Dylan, said – “The times they are a changin’” and change they have over the last few months as Head of Xbox Games Marketing, Aaron Greenberg, was keen to Tweet about…

That’s right, for the past 3 months, the Xbox One has outsold the PS4 probably thanks to Microsoft dropping the price on the Xbox One from June and also the release of the Xbox One S. However, with Microsoft focusing on the Summer months, have they inadvertently given the all-important Winter months and Christmas period advantage to Sony with the PS4 slim only coming out in the last half of September, the PSVR only just launching this week (check out Bella’s first impressions here) and the PS4 Pro coming out next month? Time will tell I suppose, but for now Aaron Greenberg is enjoying the moment, and why not?

We here at RGM are all about the love of gaming over the love of a particular console, so to us – Xbox One? PS4? PC? Nintendo? You’re all amazing and you’re all loved! But what do you think of this? Let us know in the comments below, the RGM Forums or on Twitter.

Wrapping thins up we have: Dark Souls III – Ashes of Ariandel Trailer

The latest trailer for Ashes of Ariandel – the upcoming DLC for Dark Souls III has been released and it’s some amazing viewing. Check it out below.

The trailer shows Ashes of Ariandel as having a good amount of multiplayer content, with duels and battles looking like a big part of the DLC, and perhaps a speicalization for your character depending on who you pledge your allegiance to.

Dark Souls III – Ashes of Ariandel is out on October 25th for PC, PlayStation 4 and Xbox One.

What do you think about this DLC? Will you be making this a must have addition to your Dark Souls III game? Let us know in the comments below, the RGM Forums or on Twitter.

So there you have it, a wrap up of some of the interesting items that landed on the RGM news desk this week. While you are here you may also enjoy:

Day 4: Follow up to my Day One Impressions of the PSVR device & games/experiences

Die Pop-ups! How to Stop the Battlefield 1 EA Access Trial Notifications on Xbox One

16 new games are available to purchase, play for free, or pre-order on the Xbox One