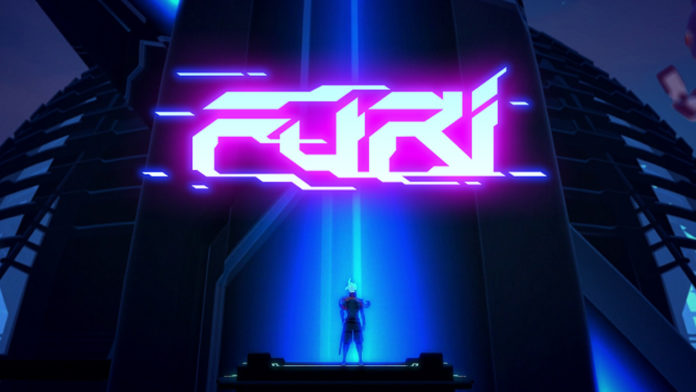 I was wondering when a developer would take the combat of games like Metal Gear Rising: Revengeance and place it in a game with sword combat that has a focus on parrying and boss battles. With Furi, developer The Game Bakers has recreated this combat style quite successfully with a boss battle-filled campaign that never holds your hand and relies purely on the player’s reaction timing and ability to adapt in order for them to succeed and progress to the next boss. The game’s difficulty is certainly challenging, but through plenty of strategic, varied gameplay and an intriguing, ambiguous story, Furi is a greatly rewarding experience with plenty of memorable moments to keep players going until its conclusion. 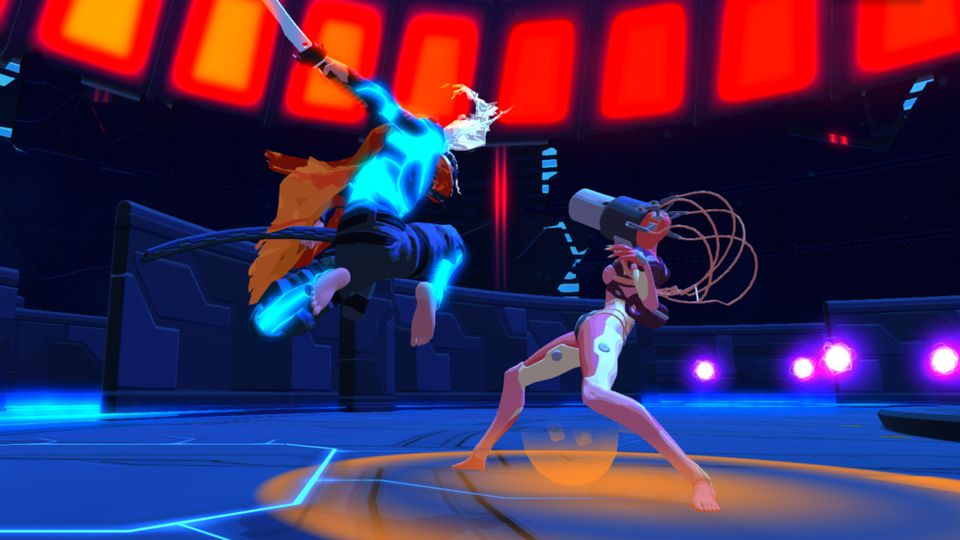 The gameplay mainly consists of the protagonist going from boss battle to boss battle, taking each of them down through a method entirely unique to that particular boss. This is most of what the gameplay boils down to: boss battle, walk to the next world, boss battle, repeat. Each boss battle begins with a more long-range fight in which the player runs around, shoots at the boss while avoiding environmental hazards, then striking the boss up close and personal whenever you get the chance.

There are up to 5 different phases with each boss, offering a different challenge for each. The final phase (for most bosses) is a close quarters sword fight with limited movement options. Each of these offers up a worthy challenge (with plenty of undoubtedly cheap deaths awaiting you with later bosses). Be prepared, for you will curse at the screen A LOT. I’m especially guilty of this during the fight with a particularly skilled (and hard-hitting) swordsman. However, after I finally conquered each boss, there’s both a great relief that the beat down is officially over, as well as a great sense of progress in your improved skill levels. In order to beat these bosses, you HAVE to adapt. You have to be able to react within a second or risk losing one of your three lives. 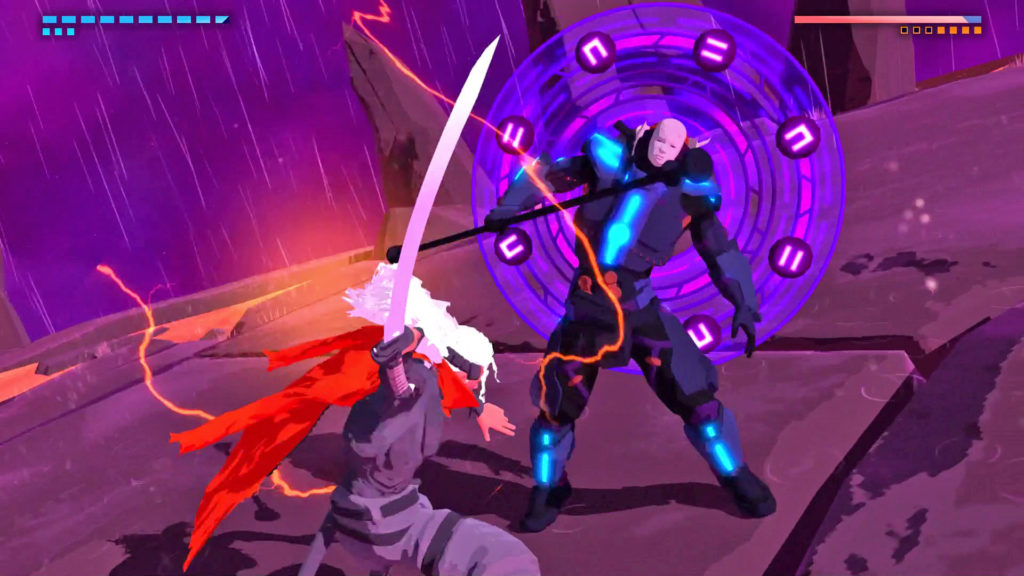 Admittedly, there are plenty of moments in which enemies switch up their telegraphed moves in some respect, whether it’s holding for an extra second before hitting you or aiming in a different direction, and some of them happen so quickly that some cheap deaths will occur. These moments will feel cheap (or extra challenging, depending on how you see it) but once you start to prepare yourself for them, then you can begin to progress towards finally beating that particular boss.

The gameplay is fast, will test both your patience and your ability to adapt, and was throroughly enjoyable throughout the game’s campaign. Just have to keep moving at all times, strike when it’s opportune, and parry constantly. 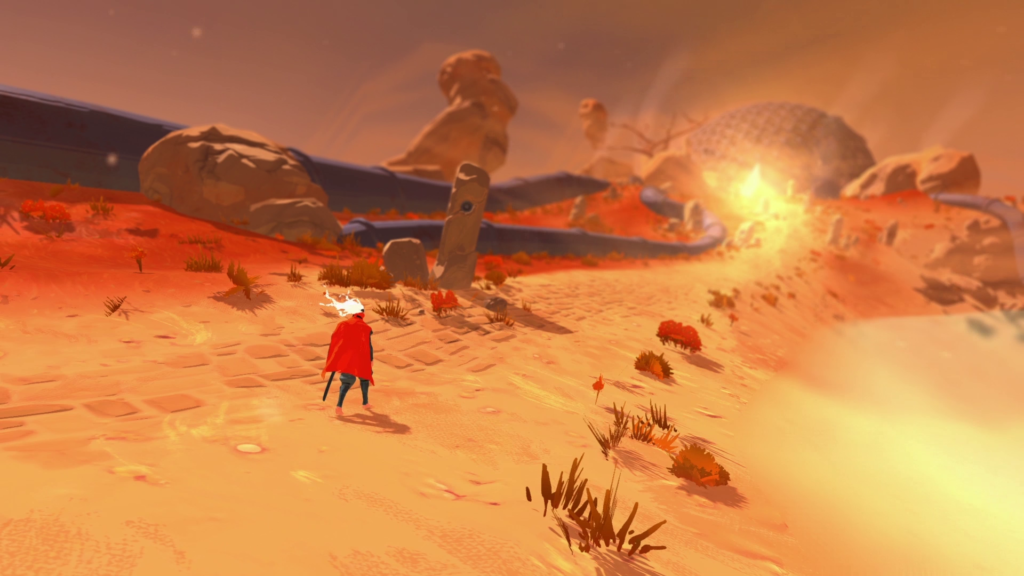 Aesthetically, the game has plenty of visually impressive moments. The moments when dozens of projectiles are on screen at a time are like a vibrant light show (especially when it contrasts with the dark backdrop of the area’s backgrounds. The faces of the characters aren’t the most detailed, but they’re designed to have more of an animated, stylized look (think The Legend of Zelda: Skyward Sword). The environments that the player walks through to get to the next boss battle are also consistently impressive with great uses of many different color schemes that help each world feel different from the last.

There are some odd graphical hiccups that would happen sometimes, like the main character’s hair hanging in place without moving or even swaying during cutscenes or some terrain pop-in while the environments loaded. The stylized approach didn’t always work out perfectly, as some environments and terrains looked more like they were lacking detail and less like they were “supposed to be that way,” leading to some moments that were certainly rare, but also certainly present.

For the most part though, the art style fit in perfectly with the game’s many worlds, the overarching story, and the combat. Outside of those few graphical hiccups, the game looks great and visually distinct from many other indie games on the market now.

The storytelling here is rather unique. The main character begins the game locked up and tortured by his jailer. The protagonist is then awoken by one known simply as The Voice, who incites him to break from his chains and kill the jailer. The Voice tells him that he will find a way to get both of them out of there, but the protagonist must kill all of the jailers before he can be free.

The protagonist remains silent throughout the story, only letting his feelings known during close-ups in which the player can witness his reactions and facial expression during certain parts of the story. Otherwise, The Voice is the one who tells you new information and backgrounds on the facilities and bosses you see as you walk to each boss battle. There are long stretches of simply walking (which you can press A on the Xbox One version) to “auto-walk” as there’s no need to stray from the path. The Voice is your main provider of story bits and information, as well as a main player in the current story as well. There are also cutscenes before and after a boss battle to serve as a glimpse into the boss’s personality and help add depth into each character that appears.

The cutscenes, although used sparingly, are interesting to witness as they serve as the few moments in which the protagonist can express (non-verbally of course) how they feel about the given situation. These range from extremely subtle expressions to rather saddening moments for both him and the player. The story does a lot of visual storytelling and it’s used quite effectively (with one moment near the end being particularly effective).

However, due to the rather ambiguous nature of a lot of story elements in Furi, players will have to pay attention in order to get the most of the storyline here. If you don’t, plenty of story bits will be completely missed and the story will be robbed of a good amount of its depth. The story can still be enjoyed on a simple level, but in order to get the most of it, players will need to listen to The Voice’s musings and watch the cutscenes intently.

The storyline doesn’t answer everything I would’ve wanted, and I wanted there to be an immediate sequel or expansion soon after finishing the game so I could learn more about the story and world, but nothing on that front at the moment. Developer The Game Bakers made an immensely intriguing game world in Furi and I hope they get a second installment to expand on the universe elements that they weren’t able to fully explore in this first installment. 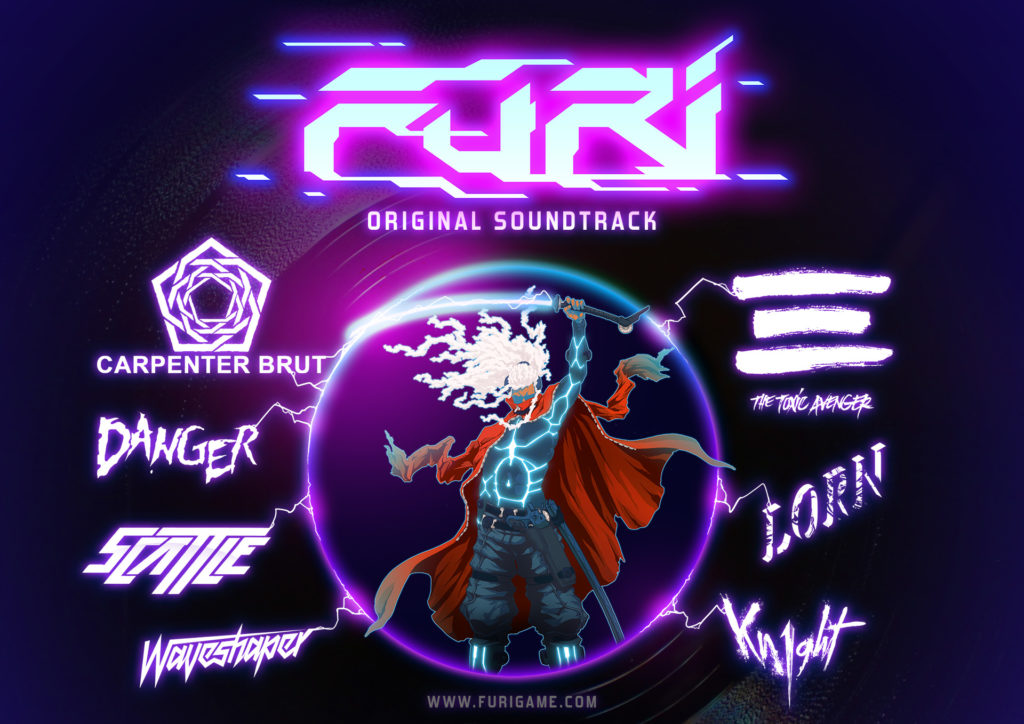 Now this may sound odd, but Furi‘s soundtrack is my favorite (and in my opinion, strongest) aspect of the game. Each song is consistently excellent and well-implemented in each situation. Throughout the game, whether it’s one of those walking sections or a boss battle, Furi utilizes many different talented artists to bring in an intensity and emotional appeal that would’ve otherwise been lacking in certain areas.

The boss battles felt more intense, the visually impressive worlds were increasingly other-worldly and stunning thanks to the work of artists like Waveshaper, Carpenter Brut, The Toxic Avenger and even more. Furi‘s prominent place in my daily soundtrack should indicate just how impressive a soundtrack The Game Bakers were able to provide for Furi.

In terms of the voice-acting side of things, each of the bosses felt like their own characters and never poorly portrayed or characterized. The voices were well-utilized with the character designs and there were no true moments that really stood out to me in a negative sense when it came to the sound side of things. 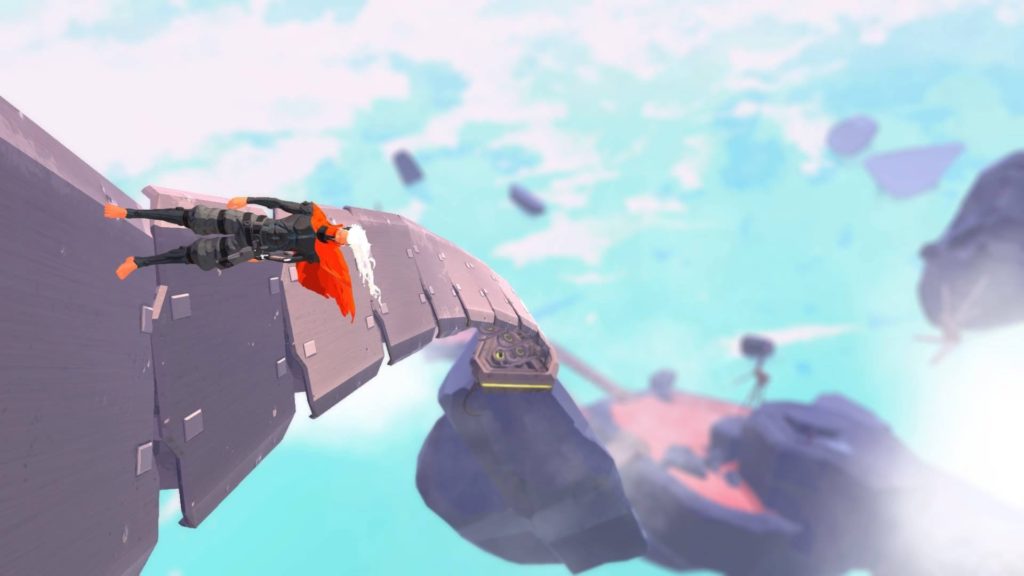 The final question remains: just how replayable is Furi? Well, for your first playthrough, you can play on either Promenade or Furi difficulty (which are easy and normal, respectively), and you unlock a third difficulty, “Furier,” when you beat the game on Furi. I played on Furi for my first playthrough, and that was still somewhat brutal and unforgiving at a number of moments, so I would suggest some caution for players who are looking for a challenge.

After you beat the game, there’s also a Speed Run mode where the focus is entirely on how fast you can power through those pesky bosses. The game assigns you a grade on your initial playthrough (I earned a D because I took a REALLY long time to beat the game in the game’s mind), so there’s also an incentive to improve your grade and earn some bragging rights.

The additional higher difficulty, as well as the Speed Run mode, help increase the motivation for players to play through the campaign an additional time or two (even if it’s just for the boss battles). However, if you felt the game was a little too cheap or the number of game overs were a little too numerous, you may not be as enticed to hop into a harder, less forgiving version of the same campaign and bosses. It depends on what your initial experience was and how much enjoyment you found in each boss battle.

Overall, the replay value is certainly there for those who found plenty of enjoyment the first time around, but if your initial playthrough wasn’t all that entertaining for you, then a second one won’t change your mind.