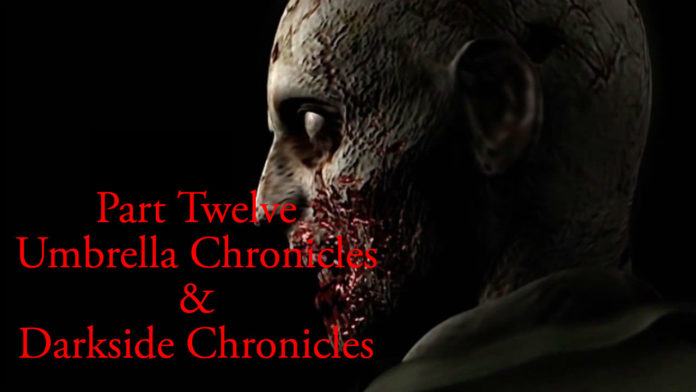 Not content with remaking the entirety of Resident Evil, Capcom also decided to reintroduce players to the events of past entries in the series, as well as new plot elements, from a new perspective. A First Person Perspective, in a way. Except without the ability to move. 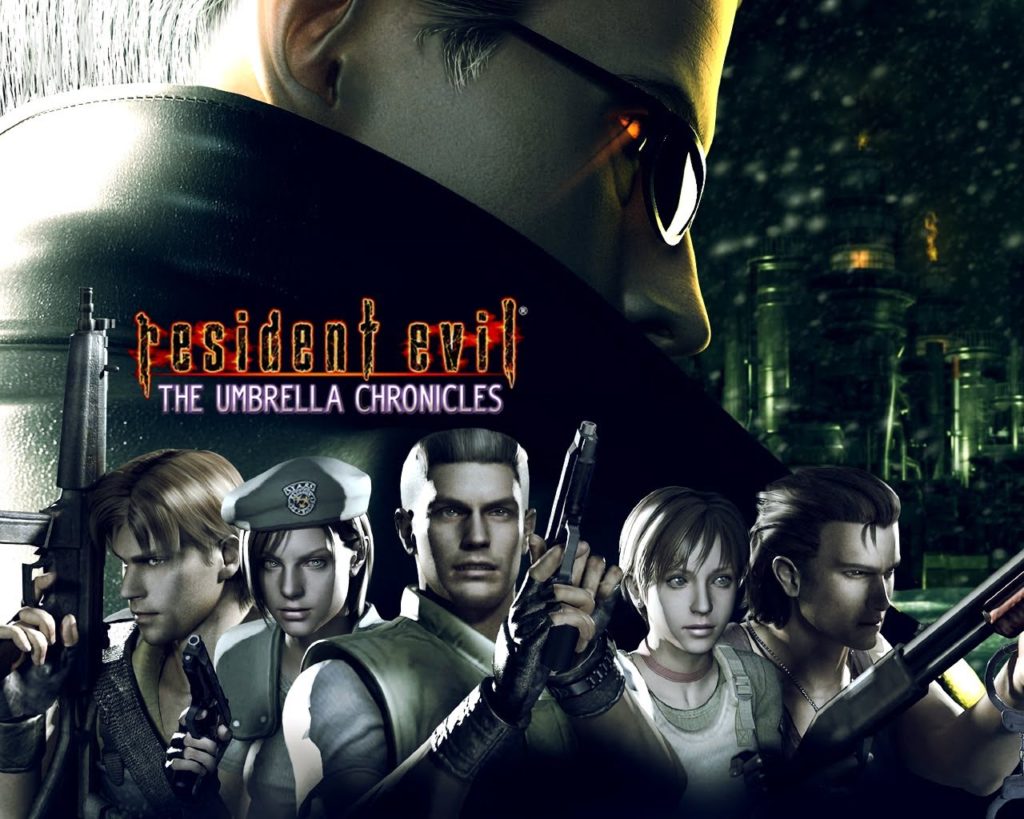 With the new Nintendo Wii console gaining attention with its innovative motion controls unavailable in competing hardware, Capcom thought “Hey, we should get a piece of this action” and began work on a new Resident Evil title for Nintendo. Originally, this game was intended to feature gameplay similar to Resident Evil 4, but then changed to an on-rails shooter, playing like a light-gun arcade game (House of the Dead comes to mind). The producer for Resident Evil: The Umbrella Chronicles, Masachika Kawata, told video-game magazine Famitsu in an interview that this decision was made because, and I kid you not, “Wii users like easiness” and that a game like Resident Evil 4 is “too complicated” for Wii players to enjoy. With comments like that, it’s not hard to see why the Wii failed to capture the audience it should have.

With gameplay changed to a style more suited to the type of person that would play a Wii (again, not my opinion, but Kawata’s), the developers of Umbrella Chronicles were able to utilize the extra space freed up by pesky gameplay elements and fit quite a lot of content onto one disc. The plot of the game followed the same plot seen in Resident Evil Zero, Resident Evil and Resident Evil 3: Nemesis. Also, players could unlock new stories to play through, such as Rebecca Chambers and Richard Aiken exploring the Mansion just before the events of Resident Evil, and witness Ada Wong’s escape from Raccoon City. A new scenario was also unlocked after finishing the first three, and involved series constants Chris Redfield and Jill Valentine as they infiltrate an Umbrella facility in Russia and try to put a stop to the evil corporation once and for all. This scenario takes place before the events of Resident Evil 4, as Umbrella had been shut down by that point, so now players could finally find out how. A second player could join in the action at any time, and as such most scenarios feature two characters working together at all times, eliminating the need for split-screen, as only one perspective was used.

During “Train Derailment”, the scenario covering Resident Evil Zero, players “took control” of Rebecca Chambers and Billy Coen, which is pretty much how that game played out anyway. During “The Mansion Incident”, set during Resident Evil, the story was altered so that Chris and Jill worked side-by-side, rather than one being captured at the beginning of the story. I personally find this idea interesting, as despite being the two main characters of the first game and the franchise as a whole, Umbrella Chronicles was the first time both Chris and Jill teamed up together (Resident Evil 5 wouldn’t release for another two years, and even then it was only the DLC that featured both working together). The third scenario, “Raccoon’s Destruction”, followed the basic story from Resident Evil 3: Nemesis, with the primary characters being Jill and Carlos Oliviera. One major plot element from Nemesis that was removed from Umbrella Chronicles involved Jill being infected with the T-Virus, and Carlos searching for a cure. So don’t play Umbrella Chronicles thinking you’ll get a nice, easy rendition of the story from each game without actually having to play the main entry.

During these scenarios, new scenes are added that include the new villain introduced in Umbrella Chronicles, Sergei Vladimir. He is seen with a type of bodyguard, a new Tyrant named “Ivan”, and serves as the overall antagonist to Umbrella Chronicles, with the fourth scenario “Umbrella’s End” unveiling his plans to unleash Umbrella’s newest and deadliest creation, the T-ALOS Project. The sub-scenario to this chapter features Albert Wesker infiltrating the base before defeating Sergei and destroying Umbrella for good.

As Resident Evil: The Umbrella Chronicles is an on-rails light gun game, each level follows a very linear path. Occasionally, the player will be given an option to choose multiple paths, but these sections do not alter the level’s progression much, if at all. The controls are also fairly limited, as you would expect. The Wii Remote is used to control the aiming reticule, and also to use melee weapons like the knife. The optional Nunchuck allows the player to look around slightly, but does not alter the movement of the characters. Occasionally, the player will need to press certain buttons during Quicktime Events. Two players can work together through the main scenarios, and side missions (or “sub-scenarios”) are initially single player only. However, upon completion, these levels are then able to be replayed alongside a second player.

I have mixed feelings with this game. The gameplay is very basic, and as such becomes very repetitive quickly. However, using the Wii Remote for aiming is done well, and the environments in familiar areas are recreated in great detail. If you are familiar with the original games these scenarios are based on, you’ll have no problem recognising where you are for the majority of the game. Also, the bosses featured in Umbrella Chronicles are challenging, and all are recognisable from the main entries in the series. Destroying items in the environment feels satisfying, and is required to unlock new weapons, health items, and documents to read in between chapters. Where the game falls flat is the new scenario depicting the end of Umbrella. It doesn’t feel as grand as the occasion demands, and introducing a mediocre antagonist to be the final hurdle Umbrella throws your way seems like a wasted opportunity. By this point, we hadn’t seen Umbrella founder Ozwell Spencer, so in my opinion the fall of Umbrella should have involved him in some capacity. Instead, we get a Russian stereotype and yet another Tyrant.

The game did receive a positive reaction from critics, and sold well for the system. As an on-rails shooter, it is one of the better ones available, and there is plenty of content available in the game, so you don’t feel short-changed. And, if you were wondering why the events of Resident Evil 2 were skipped over, then don’t worry. They were saving that for the next game. 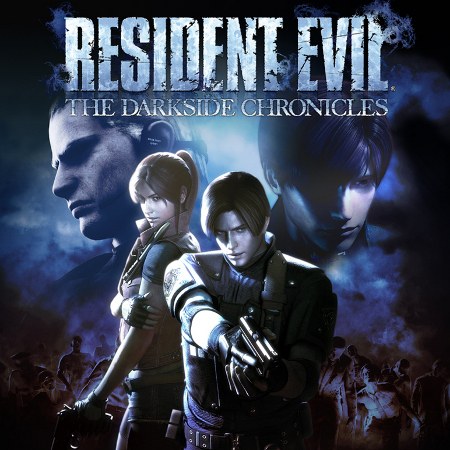 This time around, the storyline for Resident Evil: The Darkside Chronicles focused on the events of Resident Evil 2, following Leon Kennedy and Claire Redfield working together to escape Raccoon City alongside Sherry Birkin, and Resident Evil Code: Veronica, which featured Claire again, this time accompanied by Steve Burnside to begin with, then later her brother Chris reappears. The game begins with a new scenario, titled “Operation Javier”. This scenario involves Leon Kennedy and Jack Krauser, and is set before the events of Resident Evil 4, giving some insight into Krauser’s character. Even more insight is given in the unlockable scenario “Darkness Falls”, again featuring Leon and Krauser, but narrated by Krauser’s thoughts. We also see how Krauser severely injures his arm, leading him to seek out Albert Wesker in order to gain the kind of powers available through Umbrella’s research.

Gameplay remains largely unchanged from Resident Evil: The Umbrella Chronicles, but this time the camera takes on more of a jerky, camcorder feel. This is pretty effective at ramping up the tension is some moments, and the improved graphics make certain elements really come to life, especially during “Memories of a Lost City”, the scenario based on Resident Evil 2. Some improvements were made, such as headshots doing more damage now, and the second player’s aiming reticule being distinctively different from your own. However, much like Umbrella Chronicles, the new scenario falls flat, and ultimately you won’t find yourself going back to that chapter over the recreations of Resident Evil 2 and Resident Evil Code: Veronica.

There’s not much more to add here that I haven’t said in regards to Umbrella Chronicles. The scenarios that cover the plot for both Code: Veronica and, in particular, Resident Evil 2 are fun to play through, just to see the events in a new perspective. The new scenario, “Operation Javier”, is just plain dull in comparison, and I never really cared too much about Jack Krauser’s back story. I would still recommend both titles to anyone with a Wii, however, as they are two great examples of light gun style shooters for a console, and they do give a fairly good, if condensed, account of the events leading up to Resident Evil 4. Also, they are much better than the Gun Survivor games, and is as close to a remake to Resident Evil 2 as we are going to get (unless this new remake in production turns out to be half-decent). Both Umbrella Chronicles and Darkside Chronicles were released on PlayStation 3 in 2012, but if you don’t have the PlayStation Move then I’d stick with the Wii versions, as using the Dual Shock is nowhere near as fun. In fact, it’s frustrating as hell, trust me.

Ok, we are nearly there. The end is in sight, and there are only a handful more Resident Evil games to cover. The next edition will feature two games which many people, including myself, include in the main series. So be sure to come back when I take a look at when Resident Evil went episodic in the Revelations series. With even more Chris and Jill!